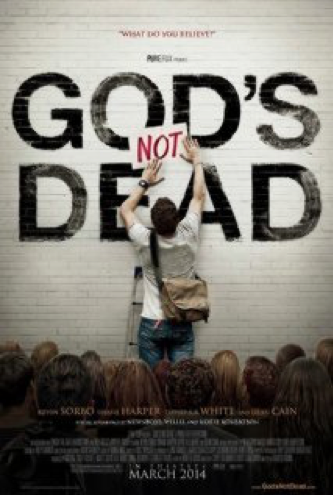 A test of faith: how a movie showed me that belief in God triumphs doubt every time

One of the most difficult questions to understand for many philosophers, theologians, educators, and students surrounds God’s existence. Is God dead? On March 21st, 2014, a movie called God’s Not Dead was released and attempted to tackle this controversial question and provide possible, necessary answers. The plot follows a recent high school Christian graduate named Josh who begins his college experience with a unique philosophy class.

Unknowingly, Josh embarks on a challenging spiritual journey regarding his faith. An atheist professor named Mr. Radisson teaches the philosophy class. He begins the class by asking his students to write down three simple words, “God is Dead” to avoid any controversial discussions or subjects. Although most students are able to easily write these words, Josh is not. Mr. Radisson provides him with another option—to prove God’s existence. Josh accepts the challenging task. However, he is now at risk of failing the class if he does not provide a compelling argument.

Even though the movie’s primary focus surrounds Josh and his willingness to prove God’s existence, Josh’s faith is tested along with the faith of many others. There will always be people who are with you and people who are against you. However, if you stand firm in your faith, God will always support you and provide for you.

At the end of the movie, Josh succeeds in his pursuit to prove God’s existence and wins over those in his philosophy class who agree with him. He figures out that the only reason Mr. Radisson has such hatred towards God is because he lost his mother to cancer at a young age. This movie draws on important issues that individuals face regarding their relationship with God. In this particular storyline, unanswered questions about God become more authentic and relatable.

Throughout our faith journeys, we take on one of two characters, either the believer or doubter. The believer is the one whose faith is tested and must overcome obstacles with great courage and faith. The doubter also experiences tests in one’s faith but fails to believe in God’s plan due to the circumstances of life.

As a Catholic devotee, I have personally experienced both of these moments. When faced with overwhelming problems (financial stress, relationship problems, lack of basic necessities) people begin to question what they did wrong in life to deserve such treatment. In most cases, people will start to blame God for their circumstances and wish for a miracle to turn things around. In the movie, Mr. Radisson constantly questions God as to why his mother was taken away from him—why was he singled out? In these times, Satan attacks the heart of the person and tries to steer the individual away from God. All humans, regardless of their faith, can relate to moments of not understanding why certain things happen. The most controversial question asked about God is: if God is considered good why does he allow bad things to happen? Individuals then make a conclusion: God is dead.

However, God gave us the gift of free will. So, evil happens because we choose it to happen. Another way to look at this is through the eyes of the believers. When they are faced with overwhelming problems, they firmly rely on their faith in God to guide them through. It is all a matter of perspective and how you look at it. Josh faced many problems in his relationship with his girlfriend after he was tasked with proving God’s existence. His girlfriend wanted him to focus on his education and not on a pointless project. Josh was in a difficult position and he had a choice: do what his girlfriend suggested and potentially damage his relationship with her, or take the professor’s challenge and prove his faith to God. Instead of seeing this as a problem, Josh turned this issue into something more. As a Christian believer, he wanted to stand with God.

It is crucial to think about the times when you were faced with a problem that seemed overwhelming. How did you react? Did you doubt God’s plan or did you turn the situation into something that God wanted for you? Sometimes, believers forget that God not only provides what we truly need in our lives, but He also gives to us in ways that may not be visible right away.

So, is God dead? No, He’s surely alive in our hearts.