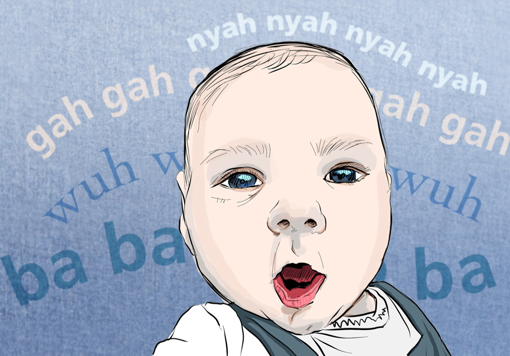 How early infant speech can be a predictor of later literacy

Infants’ early speech production may predict their later literacy, according to a study published October 10, 2018 in the open-access journal PLOS ONE by Florida State University’s Kelly Farquharson and colleagues. Complex babble may mean that the child will grow into a stronger reader, and it may help us in the future to identify reading disabilities at an early age.

Children with difficulties in identifying letters are more likely to develop reading impairments such as dyslexia, but such difficulties cannot be uncovered until the child is 3 to 5 years old. In this study, the researchers investigate whether assessing language ability even earlier, by measuring speech complexity in infancy, might predict later difficulties.

The authors tracked nine infants from English-speaking US families between the ages of 9 and 30 months. They recorded each infant’s babble as the child interacted with their primary caregiver, looking specifically at the consonant-vowel (CV) ratio, a demonstrated measure of speech complexity. The authors then met each child again when they were six years old to examine their ability to identify letters, a known predictor of later reading impairment.

They found that those children with more complex babble as infants performed better when identifying specific letters in their later reading test. Though the sample size was relatively small and all nice children participating in this study developed normally (meaning the range of variability was restricted), these results may indicate a link between early speech production and literacy skill.

The authors suggest that in the future, the complexity of infant babble may be useful as an earlier predictor of reading impairments in children than letter identification tests, enabling parents and professionals to identify and treat children at risk of reading difficulties.

Farquharson adds, “This paper provides exciting data to support an early and robust connection between speech production and later literacy skills. There is clinical utility in this work – we are moving closer to establishing behavioral measures that may help us identify reading disabilities sooner.”

This is quite the innovative study, with a lot of potential for further research. Helping young children at an early age would advance learning in school for more kids. How crazy is it that incomprehensible baby babble even has a consonant-vowel ratio, let alone can predict their ability later? More research with a larger pool of test subjects should be taken, and then programs for these babies can be created to help.