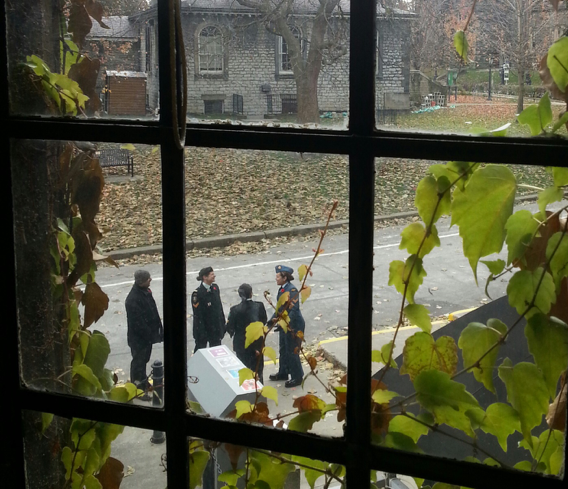 And a future worth fighting for

As canons fired in Queen’s Park, I made my way through dozens of men and women in uniform that crowded the lobby of Hart House. I was semi-paralyzed and intimidated by the sight. It was my second Remembrance Day in Canada, but spending it on campus gave it a completely different feeling than spending it in a school cafeteria. It felt as if I had time-travelled back to wartimes, especially being around Victorian-style buildings — and now surrounded by soldiers in uniform. Sitting inside Hart House’s common room and the canons still firing away, I watched as the soldiers marched towards Queen’s Park. To think that could have been me in the 1900s!

Behind Ontario’s Parliament Building, veterans and civilians alike gathered as canons were fired to commemorate those who served in the Canadian armed forces, many of whom were young University of Toronto (U of T) men and women. Growing up in Malaysia, Remembrance Day was not celebrated nationally. As a commonwealth country just like Canada, we do remember our Pahlawans, or warriors that fought for independence and peace, but poppy-wearing and services to commemorate those who fell were new to me when I first moved here. I’m not sure if it was the patriotism or canon-powder in the air but I had the urge to enroll in the armed forces that morning (Spoiler: I chickened out later on).

Before heading back to residence, I thought, “what better day to visit the Soldiers’ Tower than on Remembrance Day?” I had always heard the Carillon being played while studying in Gerstein on Saturday mornings and had always wondered what the inside of the tower looked like. The stairwell leading up to main gallery was lit by light shining through the stained-glass art pieces of soldiers and the many roles they played during the war such as nurses, administrative workers, and the frontline on battle fields. When I reached the top of the tower, five veterans were taking a group photo in their quilts and sashes. Seeing badges and awards incased nicely in glass was one thing, but having veterans wearing the badges they earned right in front of me was another. The curator explained how the maple leaf is also inscribed in the main stained-glass art piece that can be seen from the outside of the tower.

Walking away from the tower and seeing the wreaths presented by various clubs and societies of the university that line the wall and archway leading to Tower Road reminded me of how much history is embedded in the walls of every building here at U of T. I knew that Mean Girls and Good Will Hunting were filmed here but we more often than not forget the number of scientists, authors, leaders, and heroes who have walked on our pathways and sat in our lecture halls. The very same people who have stood up and fought for what they think is right. I recently met Supreme Court Justice Rosalie Abella (U of T class of 1967) and she came close to tears when she retold the story of how she became a lawyer. She said her father was not allowed to practice law in Ontario when they first came to Canada due to citizenship restrictions and how he passed away a month before she graduated law school. I have also been working on a Research Opportunity Program (ROP) course in Chemistry and we are studying Enzyme Kinetics and the famous Michaelis-Menten equation in which Ms. Maud Menten was one of the first females to graduate from U of T’s School of Medicine. Her work acted as a catalyst and shaped the biochemistry field. To think that most of them started their journeys here in a similar position to ours is pretty amazing and I get excited thinking of the boundless possibilities that are out there when we find something worth fighting for.