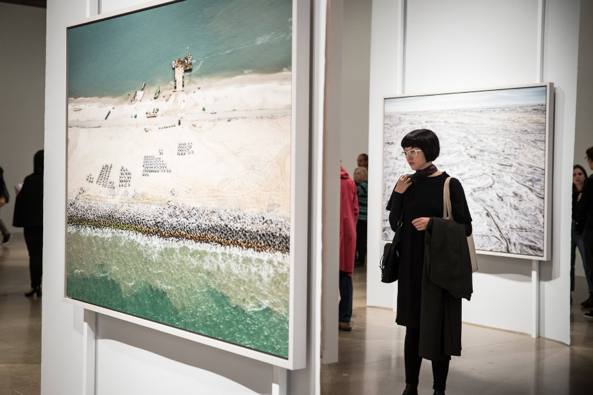 Where you, your family, and your world stand in our current geological age

From September 28, 2018 to January 6, 2019, for a limited time only, the Art Gallery of Ontario (AGO) will be hosting its new exhibition for the season: Anthropocene. Keep in mind that AGO’s weekly free Wednesday evenings do not include this special gallery, and university students should expect to pay a regular $25 admission fee for this event. Check the time slots ahead of time on the AGO’s Anthropocene website too, because specific hours of some days may be already sold out or are only available to purchase online. This event is high in demand, so try to go as early as possible and purchase tickets as fast as you can if you decide to go!

Despite living in Toronto, I seldom went to visit the AGO in the past decade. It was always at the back of my mind but it was never on the top of my list, and my lack of an artistic background didn’t help me with any constant pursuit of the aesthetic enjoyment I was looking for. But all it took for me to get up and make my way to the AGO in the middle of the semester was a single bus stop advertisement at St. George and Harbord — a photograph of a tiny red crane mining a huge mountain of Carrara marble in the Italian Alps one block at a time with the caption something along the line of, “After all, you helped to create it.”

I surprised myself that I instinctively liked the aesthetics of the advertisement, then proceeded to be confused about why and how I could possibly find a mining site appealing. I wanted to find out more, and that’s where my adventure to Anthropocene began.

The special section for Anthropocene is located on the second floor of the AGO, where works of Edward Burtynsky, Jennifer Baichwal, and Nicholas de Pencier are displayed in three connected rooms. They include photographs from all over the globe, film installations that suit some landscapes better than photos, and even augmented reality (AR) through Anthropocene’s own smartphone app called AVARA. You can download AVARA before your visit and use your own device to access their AR, but if you don’t want to for whatever reason, they have fully charged iPads on the shelves around the exhibition for you to pick up and use the app.

Overall, they showcased 30 photographs and film installations, including the world’s longest railway tunnel through the Swiss Alps totalling 57 kilometres. There are three augmented installations — a pile of ivory tusks, the last male northern white rhino, and the endangered second-largest Douglas fir tree all at or near actual size.

I realized that Anthropocene is a great step toward environmental justice for the city of Toronto, because it instills emotion into audiences like me who may have felt previous indifference toward issues on planetary destruction. I had finally faced the grim reality of manmade pollution that many citizens of first-world countries instinctively choose to ignore, due to the irresistible beauty of the artworks that renders its audience defenceless.

Also, environmental justice is not only about the environment. It ties into social justice, because while it is developed countries who are mainly creating world pollution, it is countries such as Kenya, Nigeria, Malaysia, and Chile that are paying the price with constant droughts, tsunamis, and growing numbers of deserts.

The best part of my trip is that I was able to create my own interpretations, because all that is displayed in the gallery are just photographed artworks with their titles, followed by small paragraphs on factual information on where, when, and who they were taken by.

If you are curious and wondering where all of my enthusiasm is coming from, give Anthropocene a chance for a great way to spend your day off or weekend! I’ll leave you with a quote from all three artists to fuel your curiosity: “Our ambition is for the work to be revelatory, not accusatory, as we examine human influence on the Earth both on a planetary scale and in geological time. The shifting of consciousness is the beginning of change.”