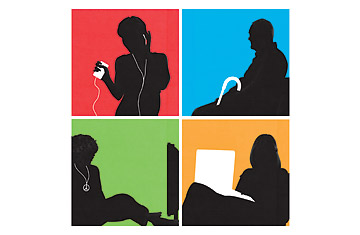 The Silent Generation, baby boomers, Generation X, millennials, and Generation Z are just some of the generations that make up to the turn of the century. All of us are connected to one another because common trends are found within each generation cohort.

You must be thinking, does everyone fall into the same category because of their birth year? Finding what generation you fall into is much deeper than this. Instead, grouping behaviours can help define who we are as collective members in society. Our actions become a reflection of what events took place during our lifetime.

So, what category do you fall into?

Do you have a strong work ethic? Are you simply motivated by discipline? Perhaps, you achieve the freedom that you deserve? Have a desire for technology to enhance our future? Or are you technologically dependent? Each of these characteristics displays the progression of human thought, from the 1920s to 2018.

What do I mean by all of this?

The Silent Generation, from 1928 to 1945, sought the importance of hard work because they grew up in hard times, including the Great Depression and the Second World War. Baby boomers, from 1946 to 1964, are more in tune with structure because many grew up in strict households during Martin Luther King Jr. and Rosa Parks’ rise to fame. From 1965 to 1980, Gen X students emerged through forms of rebellion. Absence of parental discipline resulted in a break from tradition and emergence into freedom. This was shaped by the variety of pop culture from punk to hip-hop, which coined this era “The MTV Generation.” How about the millennials? That’s simple; born from 1981 to 1995, the rise of the internet shaped them. As natural networkers, their desire to improve technology helps advance our future, whereas Gen Z students born from 1996 to the present depend on technology to function.

In a TEDxHouston video, “What do we know about the generation after millennials?” Jason Dorsey explains how each generation is shaped by events that alter perceptions of thinking. In order to break down this clever strategy, he clarifies what generation we currently live in: Generation Z. Today’s demographic cohort is shaped by technology. No surprise there.

The way in which technology shapes how we live is determined by how dependent us students are on technology, not just the production of it. In his TED talk, Dorsey wants to bring alive what research shows us is true about generations. He explains how children today do not know what life was like without FaceTime, iPhones, or iPads when communicating with friends and family. This is simply where Gen Z got its alternate name iGen. This is detrimental to Apple product influence.

So what do we need to know about them?

The Centre for Generational Kinetics is an organization that studies generations, how they are created, where they are trending, and how we get ahead of the next generation. He defines a generation as a group of people raised around the same place and born around the same time. Hence, birth cohort — “an exhibition of similar characteristics, preferences, and values over their lifetime.”

Dorsey reiterates that generations hold clues of where to begin influencing and connecting people of different ages. Each generation has big differences within them, which is why it is not only important to know the years of when the generation starts and finishes, but also the relationship between geography. This explains two things: why we might see different birth years in different places, and why people feel they don’t fit into their cohort. The Centre for Generational Kinetics has come up with a solution to these most asked questions when determining what generation you fall under.

First, people who speak about generations all reach different conclusions because they don’t actually research, rather they just assume based on their perception of individual characteristics. Second, birth years differ by geography. Individual characteristics are different depending on where you live. Events that shape who you are may not affect someone who lives on the other side of the world during the same time period. Only large events that dramatically affect the whole world can shape the behaviour of a whole generation. Here’s another reason — one may not always feel connected to their generation because, over a period of time, your generation will split into two: the people you are supposed to be, and the way you choose to act. Not everyone is the same; we don’t all think, feel, or act in the same manner. In the end, it comes down to opinion and how relatable your generation is to your personal experiences.

The most important underlining statement from Dorsey, the President of The Centre, is that “it is not just the number of years; you have to ask yourself what is the most important event that shaped the generation?” So let’s talk millennials. Why are millennials getting so much attention recently? This is because they bring different strategies toward employment that challenge Gen X and baby boomers in the workforce.

The transition from millennials to Gen Z through society is worth noting. Millennials influence Gen Z in many ways. In order to establish this, we must first look at what events shaped their behaviour from 1981 to 1995. The major event that shaped millennials is the terror attacks on September 11, 2001. Since then, 9/11 had profound effects on air travel. This gave rise to extensive security by creating the Transportation Security Administration, banning blades, pocket knifes, and liquids on airplanes, increasing pat-downs, and absolutely no bomb jokes! Most importantly, we must not forget this all led to an increase in technology. Technology helped improve forms of security, like increased phone and internet activity surveillance.

Here, we have the world changing at the touch of a button. The web drastically changed from basic information with Windows XP to the rise of social media platforms. Who remembers MSN Messenger, MySpace, Skype, Flickr, Tumblr, and Reddit?

These served as platforms that gave rise to the advancement in technology, which led society into the future. Millennials created the pioneer social media platforms we remember today, but Gen Z relies on them day to day. Through Facebook, Twitter, Instagram, YouTube, and Google, iGen remains connected to their friends and families virtually, rather than in person.

Most of you might have already realized that because as of July 1, 2017, Statista estimates the following population to generation.

Let’s take another stance; what trends does Gen Z define? And how can this relate to all the other generations that came before?

Two other trends exist: diversity and parenting. iGen is the most diverse in North America because with the rise of multiculturalism, the legalization of gay marriage, the United States’ first African-American former President Barack Obama, and successful revolutionary movements such as the #MeToo and #TimesUp movements, Gen Z’s persistence and drive for equality is at an all-time high. Students who fall into this generation are diverse in the way they view their future. Instead of getting married and starting a family at a young age like Generation X and baby boomers, millennials and Gen Z have a different approach. Men and especially women are equally dominating the workforce. Both are more career-oriented and would start a family later on. However, the Silent Generation and baby boomers were more connected to family in a simpler time. Millennials and Gen Z on the other hand are more sociable, confident, and increasingly more competitive than any other generation.

A study by the American Psychological Association (APA) suggests that over the last three decades, the millennial generation increasingly strives for perfection in school and the workforce, which can lead to anxiety and burnout. Researchers Thomas Curran and Andrew Hill believe the cause is “neoliberalism, because this meritocracy places a strong need to strive, perform, and achieve at the centre of modern life.”

You need to keep in mind that millennials’ parents were baby boomers. This means that baby boomers had a strict parenting philosophy. But as The Centre for Generational Kinetics realizes, parenting trends are becoming more lenient as time goes on. A ripple effect occurs, but this time it is rippling up rather than down. Dorsey concludes, that “instead of change starting with the oldest and influencing the youngest, it is actually the opposite: starting at the youngest and influencing the oldest.”

iGen affects all generations. This is because generations before Gen Z not only want to keep up with the times, but become involved in their children’s and grandchildren’s lives. This can explain why your grandparents and parents, Gen X, and millennials friend you on Facebook. They want to be more connected to the world like iGen.

Living in the present, it is not just Gen Z and millennials that advanced the time, but the Silent Generation, baby boomers, and Generation X instilled strong values in the new generation, which made everything fall into place. Each generation is an important factor to the advancement in society — none of them are more special than another.