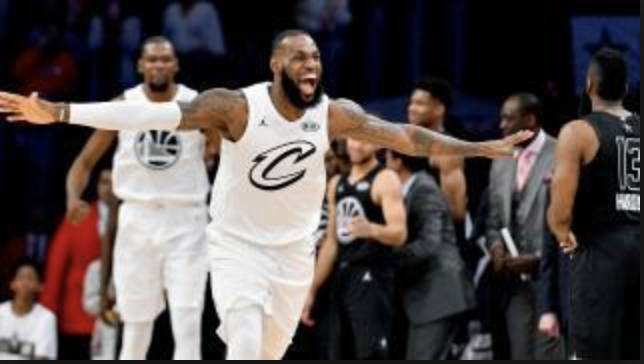 The National Basketball Association (NBA) All-Star Weekend consists of festivities that showcase the talents of the best players in the NBA. However, this year was memorable in many respects, whether it be the young talent that shocked the world or the revamping of the All-Star Game. Although the All-Star Weekend officially began with the celebrity game on Friday evening, I’m going to pretend it started with the Rising Stars Game that night since only so much analysis can be devoted to Jamie Foxx’s antics and watching out-of-shape ex-NBA players get their yearly workouts in.

The Rising Stars Game was a very entertaining game that showcased a very exciting future for the NBA. The high-flying acts of Donovan Mitchell, John Collins, and Jaylen Brown were a sight to behold. In the first two minutes, Mitchell showed us why he is a candidate for rookie of the year with a monstrous one-handed jam off the glass. However, some other lesser known players showed off their abilities in this game as well. To the average NBA fan, the Sacramento Kings are the definition of dysfunction and boredom. However, their young guard duo of Buddy Hield and Bogdan Bogdanovic led the way for Team World past Team US. They combined for 12 three-pointers in the shootout, with Bogdanovic winning the MVP award after a Steph Curry-like performance shooting, knocking down deep bomb after deep bomb from the All-Star logo. Keep an eye out for the underrated Kings as they continue to develop their young talent!

NBA All-Star Saturday night continued to be unremarkable overall, as no actual all-stars chose to participate in the festivities, following the same trend as prior years. The Skills Challenge featured a different bracket for forwards and guards which I think added a little more diversity to the contest. However, it was basically an extension of the Rising Stars challenge with participants like Joel Embiid and Chicago’s Lauri Markkanen being prominent in this contest. At least the Brooklyn Nets can say they won something this year with their emerging point guard, Spencer Dinwiddie, winning the contest.

The three-point contest may have been the highlight of the evening with Devin Booker putting up an astounding 28 points. With Tobias Harris beginning both rounds so hot, many thought he was the guaranteed winner. However, what proved to be his downfall was his inefficient shot mechanics. Being a three-point specialist myself, it is deceptively fatiguing to shoot 50 three-pointers in such quick succession. Since Harris jumps so high off the ground on his jump shots, the fatigue of the contest affected him much more than his competitors, ultimately leading to his loss. Unsurprisingly, the Toronto Raptors representative, Kyle Lowry, came up small under the bright lights.

The slam dunk contest consisted of the typical shenanigans where players put more of their creativity into costume changes than their actual dunks. From Larry Nance putting on his dad’s jersey and mimicking every Dwight Howard dunk with a lesser degree of difficulty or Victor Oladipo wearing the Black Panther mask for an underwhelming double-clutch finish, the creativity left something to be desired. However, one bright spot was in the Utah Jazz emerging star and ultimate champion, Donovan Mitchell, who displayed the type of intensity and swagger anticipated from the best dunkers in the game. However, his final dunk summarized the evening as he merely changed into a Vince Carter jersey and copied one of his legendary dunks.

The much awaited All-Star Game capped off the weekend on Sunday night as the league and fans eagerly awaited the result of their new decision to have a playground style draft with Team LeBron vs. Team Steph in contrast to the typical East vs. West format. To everybody’s delight, the format change was an overall success. Aside from Stephen Curry deciding to turn the 3rd quarter into a popcorn eating contest, the game maintained a very good balance of competition and showmanship spurred in the first three minutes by guys actually playing defense and plays — like LeBron throwing a bounce pass alley-oop to Anthony Davis. The game had a very competitive ending with Team LeBron coming back from a 13-point deficit with five minutes left to beat Team Steph, capping the game with LeBron locking down Steph on the final possession. Perhaps next year, Steph will take the game seriously like LeBron.

I feel compelled to at least mention the music performances considering the controversy. Unlike others, I thought Fergie put a nice touch on the national anthem, giving it some personal zest. She was simply an artist being an artist. The half time show by N.E.R.D. was extremely underrated in my opinion, exceeding my expectations far more than the Super Bowl performance by Justin Timberlake.

Overall, I thought the weekend was a step in the right direction for the league and fans began to show increased interest in the only recently competitive weekend.