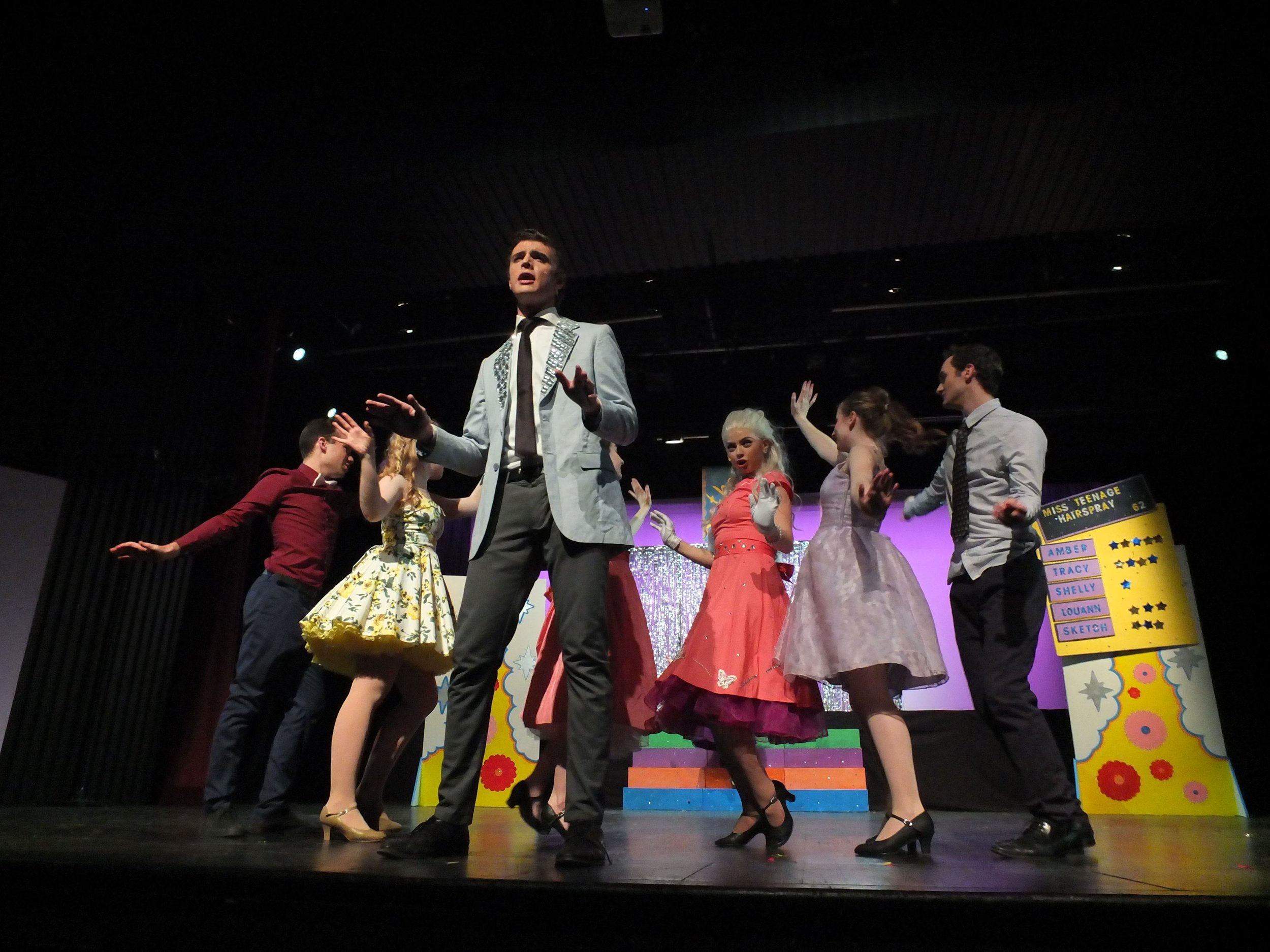 The latest production of the SMC Troubadours is Hairspray, the musical stage adaptation of the 1988 John Waters comedy. Judging by the 2:00 p.m. matinée performance on February 17, Hairspray was a labour of love with a particular eye for comedy and choreography.

Hairspray kicks off with big-haired, big-boned teenager Tracy Turnblad (Hannah Lazare) wishing a good morning to 1960s Baltimore, setting her patina of optimism over the seedier reality of drunks, flashers, and redlined neighbourhoods. Tracy soon fulfills her dream of becoming a cast member on The Corny Collins Show by collaborating with her African-American friend Seaweed (Victory Akinwande) to introduce innovative dance moves on TV. When Tracy uses her new fame to call for racial integration on the airwaves, her rival Amber Von Tussle (Alexandra Palma) and the latter’s terrifying mother Velma (Zoi Samonas) move to preserve their own ideals of thin, white perfection. Faced with jail time, financial ruin, and the disintegration of her relationship with ditzy charmer Link Larkin (Robert Bazzocchi), Tracy grows to learn the meaning of ongoing struggle.

It must immediately be acknowledged that the Troubadours have assembled an impressive ensemble this year and are willing to play to the strengths of its members. Hairspray is a better fit for a student drama society than previous efforts like Evita, where much of the play’s quality relies on the Herculean efforts of a single lead performer. In contrast, Hairspray is very much a team effort whose theme of diversity is best presented by encouraging the strengths of cast members within the framework of Mark O’Donnell and Thomas Meehan’s book of the musical.

A full overview of each cast member’s particular contributions would be impossible, but three performances must be singled out. Samonas is magnificent as evil matriarch Velma Von Tussle, imbuing every line and gesture with delicious hamminess. Lisean Henry plays almost the polar opposite as Motormouth Maybelle, but is equally impressive in two ballads that balance a command of the stage with lovely, smooth vocals. Finally, Bazzochi’s Link Larkin is possibly the strongest triple threat of the bunch, using his whole body to dance, sing, and nail comedic gestures that convince us of Link’s draw for his TV audience.

Hairspray is full of bursts of character, which director Armon Ghaeinizadeh evidently embraces. Multiple costume changes communicate a great deal about the increasing confidence of the marginalized characters. A few concessions are made to the original staging of the Broadway production, but the strongest element of the production is Ghaeinizadeh’s own choreography. The personalization of each character’s dance style communicates a great deal about them within a handful of steps. The high energy that results keeps the comedic beats rolling, efficiently communicates the many concurrent subplots, and is responsible for much of the audience’s enthusiasm between musical numbers.

This version of Hairspray is not as airtight as a can of Ultra-Clutch. As is typical for Hart House, there were some uneven microphone issues. Furthermore, transitions to higher notes during the faster solos posed a problem for quite a few cast members.

However, what is more clearly developed here than in most productions of this show is the theme of allyship. When Maybelle explains to Tracy that the struggle for equality is ongoing and difficult, the earnest white kids literally sit down in darkness at the edge of the stage while Maybelle sings her signature ballad “I Know Where I’ve Been,” accompanied by beautiful supporting vocals and a two-person ballet routine.

The show must conclude with the realization of Tracy’s “Baltimore fairy tale,” The Corny Collins Show fully and forever integrated, and even the villains abandoning their defense of white supremacy. But the impression remains with the applauding audience that this utopian conclusion belongs to the future, nearly 60 years after the events of the play. As the main character, Tracy becomes a model of patient determination, standing up for herself and others while striving to elevate the voices of her less privileged friends. It’s an example that we could all stand to model.