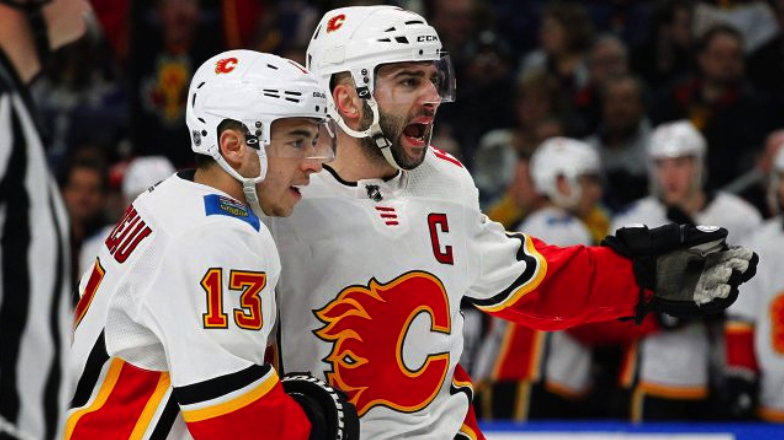 With home records and winning streaks, The Flames lead with competitive advantage

It has been a complete 180-degree turn for the Calgary Flames from last season to this one. Led by Captain Mark Giordano, offensive production by Johnny Gaudreau and Sean Monahan, and unbelievable goaltending by David Rittich, Head Coach Bill Peters and the Calgary Flames currently sit atop the Pacific Division, and second in the league.

Last season was less than stellar if you were hoping for a successful Calgary Flames season as they had a record of 37–35–10 and were a bottom-of-the-league team in most statistical areas such as “Goals For” (the Flames were ranked 26 out of 31 teams). The Flames seemed to rely on their top guys too much, and when their best players could not perform, the team suffered — they missed the playoffs and sent the young Flames home early for the summer. However, this season seems to be a comeback story. The Flames are sitting at 30–13–5 after an overtime loss to the Sabres on Wednesday, January 16. Before that, the Flames had a big 7–1 win over the Arizona Coyotes on January 13, which was their last win in a five-game win streak. According to Sportsnet, the Flames also hold the top spot for a number of third-period comebacks at seven. Holding their own at home with a 15–4–5 record as of January 18, they seem to be unstoppable playing at the ‘Dome.

Home record and win streaks aren’t the only things leading to the Flames’ success thus far in the 2018–19 season. Elite performances by multiple players have elevated a team with little experience into a real contender. Johnny Gaudreau leads the squad and is currently tied for second in a very close point race with 71 points (28 goals, 43 assists) as of January 18. As of right now, Gaudreau is one of the most impactful offensive players in the league, earning himself his fifth All-Star appearance. Alongside him, Sean Monahan is not far behind with 58 points, making his presence felt every time he’s on the ice. Outstanding goaltending by David Rittich has been a very large upgrade to his less impressive predecessor Mike Smith. Rittich currently has a save percentage of .917, as well as 17 wins earning him a top 10 spot as of January 18. Rittich has proven thus far that he is capable of being a top goaltender, and for the Flames that has been an area lacking in consistency for years, seen in the multiple goalies who have come through the team. The stars give the Flames the edge to pull out the big wins, but a lot of the credit deserves to go to role players such as Elias Lindholm (55 points) or Matthew Tkachuk (55 points), the Flames’ success is greatly derived from the outstanding work done by the star players and their ability to mesh with the younger, less experienced players, pulling out almost as many wins halfway through the season as they had all last year.

Passing over the halfway mark of the season in the next few weeks, it is fair to be hopeful if you are a Calgary Flames fan, as they are one of the most electrifying teams in the league who will keep a game interesting until the final buzzer. That being said, there is a long way to go until April, but if the playoffs started today, the Flames would be a heavy favourite with the tools they have at their disposal.