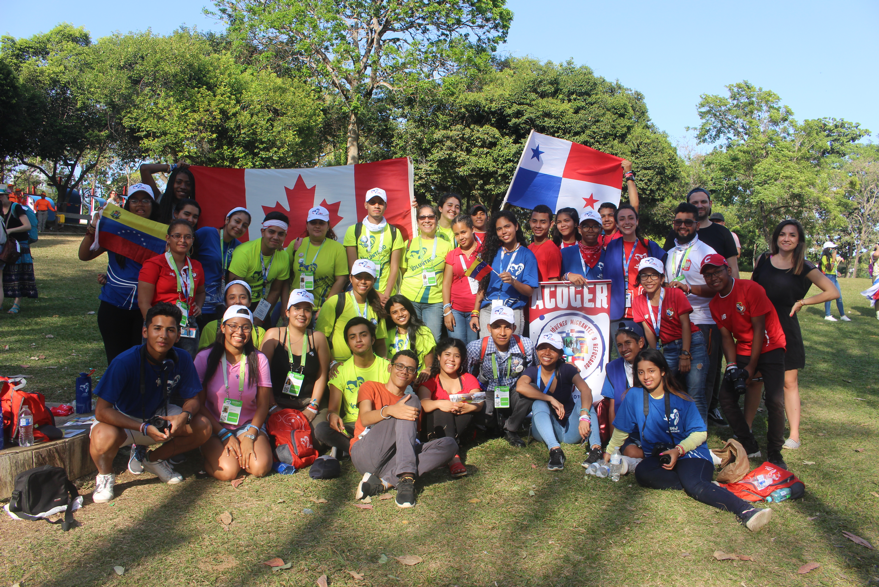 This year, I had the privilege of being a volunteer at World Youth Day in Panamá, January 17–28, 2019. World Youth Day is an event organized by the Catholic Church that occurs approximately once every three years in a different country for about a week. This event includes the Pope and unites young Catholics in prayer, learning, and solidarity. This year, approximately 600,000 people were present. The theme of this World Youth Day was “Here am I, the servant of the Lord. Let it be done to me according to your Word.” These words emulate Mary’s “yes” when she became the mother of God from the Gospel of Luke 1:38.

There were five locations that hosted volunteers, and we slept in classrooms at a university. Many of the people I met were from around the world, especially from Panamá, Nigeria, Vietnam, Brazil, and some other countries, particularly in Central and South America. Even though it was a short time, the power of God working among us during those days established beautiful friendships.

My main volunteer task was supporting the Extraordinary Ministers of Holy Communion. There were approximately 400 Extraordinary Ministers who came from the local diocese, and 400 of our youth volunteers distributed Holy Communion to thousands of people at the Opening Mass on Tuesday, January 22, and the Closing Mass on Sunday, January 27. I helped my Extraordinary Minister get to and from our designated spot for distribution safely, and held the paten under people’s mouths when they received Jesus in the Eucharist. One beautiful memory of mine was at the Closing Mass when we went out in large groups to our designated locations, and over time, people began to realize that Jesus in the Blessed Sacrament was passing by them. It felt like the people were “parting the sea” to allow us to pass through. I also felt like I was accompanying Jesus on His journey on Palm Sunday, as many people began to kneel as well. In the various liturgies, people were joyful and full of the Spirit. This reminds me that we should always be so happy to have Jesus, as “He is Emmanuel,” which means “God with us.”

Prior to the opening of World Youth Day, all of the volunteers spent a morning cleaning a beach. This was a very beautiful experience as it felt like truly living out of Pope Francis’ encyclical Laudato Si’! I felt the power of teamwork, especially when we created a chain to bring up all of the garbage bags we had collected.

I also felt a call to deepen my prayer life. I received a deeper desire to meet God through the Eucharistic Adoration, Masses, Rosaries, Bible reading, and the Liturgy of the Hours that I participated in, which has also carried over into my life back in Canada. My passion for evangelizing has also deepened. Being near the Pope and hearing his words of wisdom in person drives the message of following Christ totally, without reservation, at whatever cost. I think it will take a lifetime to digest all that he has said, along with all of the other beautiful experiences I had. This experience was a big stepping stone in my faith journey, and I look forward to seeing what God has in store.

In Pope Francis’ address to volunteers, he said, “In generosity [the Lord] always wins: you give the Lord a little and he gives you a massive amount … The Lord is like that, what can we do about it; that’s the way he loves us.”

In a vigil, Pope Francis noted, “The life that Jesus gives us is a love story, a life history that wants to blend with ours and sink roots in the soil of our own lives. That life is not a salvation up ‘in the cloud’ and waiting to be downloaded, a new ‘app’ to be discovered, or a technique of mental self-improvement … [I]t is alive and wants to be born in our midst so that we can bear fruit just as we are, wherever we are and with everyone all around us. The Lord … is the first to say ‘yes’ to our history, and he wants us to say ‘yes’ along with him.”