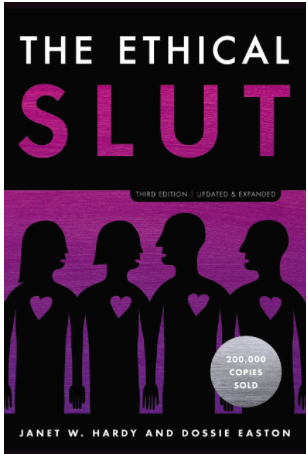 A candid conversation about the myths and virtues of polyamory

There is an episode of How I Met Your Mother in which Ted, the show’s chronically single protagonist, lists off the group Halloween costumes he and his recently engaged best friends Lily and Marshall have worn over the years. “Salt & Pepper and Cumin” is one, as well as, ridiculously, “Lady & the Tramp and the Bowl of Spaghetti.” Couples’ costumes — as well as other twosome conventions — simply make sense to most people, and the notion of disrupting this perfect symmetry by adding in a third (or fourth, or fifth) party can come off as nonsensical, silly, or a sitcom-esque gag.

Tropes around conventional monogamous couples are especially ubiquitous around this time, given the potentially stifling hegemony of Valentine’s Day. The notion of three lovers sitting down for a romantic Valentine’s Day dinner may seem ridiculous, even laughable. 24-year-old Christine can attest to this, remembering the uncomfortable reaction she received when going public with her polyamorous lifestyle. “I’ve gone to a formal before with two men and it was so scandalous… People were so rattled by it; it’s so uncommon, unheard of.”

“There’s enough stigma with a woman having sex anyway, let alone blatantly having two boyfriends and being open about also having sex with other people,” Christine (to ensure privacy, her real name was not used) says, emphasizing the troublingly toxic discourse around open female sexuality.

Despite its shock value, polyamory is not as subversive as many think — it has survived and been evolving from BCE to the modern day and it’s only growing in popularity. Not merely a vestige leftover from Ottoman empire-era harems or the 60s free-love culture, polyamory is a thriving, valid lifestyle that is practised in all spheres, from liberal artist-types to high-strung businesspeople.

Christine shares the nature of her own polyamorous relationship, dismantling the misconception that all poly individuals merely want to ‘sleep around’ and inviting others to work through their reflexive discomfort around polyamory.

“[There is] a very large distinction between open relationships and polyamory. When I was polyamorous, I had two boyfriends for six months — they actually lived together and knew each other [though] they were both straight and didn’t interact with each other in a romantic way. I had been dating one of the guys for a year and a half before I started to date the second guy, and then I dated the second guy for four years afterward, and [the two of us] ended up transitioning from a poly relationship to more of an open relationship. The distinction between the two was that when we were polyamorous we were open with love and emotion — we could love, feel connected with, [and] date multiple people — [whereas] when we were open it was purely sexual.

Though various queer lifestyles are often tolerated or even celebrated, polyamory is still confusing and even offensive to many. The notion of having multiple lovers minus the jealousy, insecurity, and possessiveness typically regarded as inextricable from a monogamous relationship is confounding, thus the widespread dismissal of polyamory as a fairy tale at best and unscrupulous at worst.

While polyamory is a lifestyle that many ignore or exclude because it makes them uncomfortable, it is important to allow ourselves to be defamiliarized to our preconceived notions about love, sexuality, and relationships. We should challenge our own assumptions and question why this alternative relationship style makes us uncomfortable, as well as critique our own complicity in the ellipses around polyamory — as well as other queer lifestyles — in public discourse.

Christine challenges the stigmas and doubts that pervade public perceptions of polyamory, explaining that “the fundamental core of poly is if you can love many friends [or] family members, why can’t you love many partners romantically? I’m very able to distinguish between the person that I love romantically and what I’m doing sexually — I’m wholly able to manage those feelings and emotions separately.”

Dossie Easton and Janet Hardy — perhaps the most well-known defenders and educators of polyamory — use the word “slut” to describe anyone who practises polyamory or other forms of open sex-positivity, from multi-partner polycules to open relationships or even casual sex. The term “slut” serves to both reclaim the once-misogynistic word, chiseling a sex-positive vernacular in its stead, as well as establish a simple, knowable language around sluthood. A “slut” is anyone who believes that “sex is nice and pleasure is good for you,” and that a multiplicity of love will enrich, rather than stymie, a healthy love life.

Though sluthood may not be so different from certain flavours of ‘acceptable’ sexual lifestyles, polyamorous individuals often experience discrimination, thanks to the pervasive stigmatization of sluthood. Easton and Hardy “recommend extreme caution in choosing who you come out to,” warning, “we know people who have lost jobs, child custody, and more because the wrong people have become aware of their sexual choices… While some cities and states offer some protection to people who are gay, lesbian, or transgender, we are not aware of any that guarantee equal rights for sluts.”

Similarly, Christine asked for her name to be kept private, explaining that a non-monogamous identity could harm her workplace image, as well as potentially lead to unwanted judgements or assumptions. “Monogamy is assumed 100% of the time [and] coming out as poly is very much like coming out [as queer],” she explains.

Polyamorous marriages aren’t legal in Canada, to the delight of many individuals who envision a domineering polygynous man mistreating his numerous wives. This explicit exclusion of polyamory from the institution of marriage disregards the rights of an entire group, however, as well as ignores that polyamorous relationships are just as valid and consensual as any other. Easton and Hardy remind sluts everywhere that “it’s not easy being easy” — horrifically, even informal poly relationships are technically illegal in Canada.

Christine mused, “It definitely crossed my mind about how weird it is that [my partners and I] couldn’t all get married. The distinction between [my two boyfriends] was that one of them [wanted] to be 90 years old and still banging 18-year-olds, [he] never wanted to be tied down, whereas the other guy was the most wholesome, classic, monogamous person — for him, it was more about love.” She joked, “I used to envision taking the second guy as my husband, and the first guy would live in our attic and while he’s travelling around the world he would pop by.”

Despite its illegality, Christine emphasized, “There’s not actually anything wrong with it — if three people are in love and want to get married, it shouldn’t matter.” She realizes, however, how ludicrous the concept of a three-person wedding may seem to some: “We aren’t even really ready to handle gays and trans people, so we are not at the poly level yet.”

“Our culture places a very high value on self-denial,” say Easton and Hardy — an unfortunate truth that pervades perceptions of what a “productive” lifestyle should look like. “All too often, those who unapologetically satisfy their desire for pleasure in their utterly free time are seen as immature, disgusting, even sinful.”

To the implication that being a slut inherently decreases your worth because of an outdated notion of the cheapness of being ‘easy,’ Easton and Hardy ask, “Is there, we wonder, some virtue in being difficult?”

Christine firmly believes that polyamory is far from an irresponsible, immoral, or maladaptive choice — in fact, her experiences in polyamorous relationships have helped her cultivate her current healthy monogamous relationship, as well as nurture her self-love and sex-positivity.

“A key thing about polyamory is that you need to acknowledge that jealousy is an emotion that you can control and is typically related to an insecurity of yours — at the end of the day, poly took substantially more open and honest communication [than monogamy does]. There was no room for lying or beating around the bush, you had to say what you were feeling 100% of the time. It taught me a lot of healthy, valuable lessons for any relationship.”

She countered the suggestion that polyamory would evoke more jealousy or resentment from one’s partners than does a monogamous relationship. “I think any human will naturally be jealous of many things — anyone gets jealous, it’s about what you do with that jealousy. Some people might blame someone when they’re jealous, but with a poly relationship you have to take that energy and think critically about it, so that it becomes more of a conversation… which is a good lesson for any relationship.”

According to Christine, while “in monogamy you might not think of talking through [critical issues] until they come up,” in polyamory “you need to do a lot more of that up front” — establishing boundaries and expectations, as well as having candid conversations about what you want and what hurts you. This is helpful in fostering any healthy relationship, but is a prerequisite to a polyamorous one.

Easton and Hardy call this assumption of jealousy a “starvation economy” — a principle rarely applied to friendship and familial love. After all, having an abundance of friends is seen as healthy rather than maladaptive, and it is understood that a mother of 10 can love all of her children as much as a mother of one loves hers. Yet, inexplicably, many are suspicious of a woman with 10 lovers’ ability to love each of them as much as she could love a single, monogamous partner.

Christine warns against casual attempts at polyamory — a lack of structured commitment and honest conversation is where so many FWB situations fail — and encourages those interested to commit fully to the lifestyle. “As much energy as it takes to maintain one relationship, you basically have to duplicate that energy [in a polyamorous relationship] — a lot of time and energy and emotions went into it. A lot of polyamorous couples have a primary and secondary [but] the way I treated it was that they were both my primaries.”

The notion of multiple “primary” romantic partners might sound both exhausting to those struggling to balance a monogamous relationship with busy academic and social lives. Imagining the politics of planning a romantic Valentine’s Day celebration for not one but two other partners — navigating equal-value gifts that are still personal, ensuring everyone’s needs and desires are met, and trying to reserve a candlelit table for three on the most couple-centric night of the year — is daunting to say the least. There are other types of open relationships and agreements, however, that may be less rigorous and time-consuming, or may work better for certain individuals. Sluthood comes in many forms, many of which are less scary than sex-negative societies suggest.

Though Christine is in a happy monogamous relationship now, her poly and queer identities are still an integral part of her ongoing dialogue with her current partner. “Poly used to be quite a big part of my identity, but since I’ve agreed to be in a monogamous relationship, [it’s about showing] respect for the relationship you’re in.” Christine respects her partner’s needs and boundaries, and expects the same from him: “One of the first discussions we had about our relationship was that I need threesomes in my life, I can’t live my whole life with only him — and not in a bad way, but I’m a queer woman and I can’t never be with a woman ever again.”

Though she would be open to re-exploring her polyamorous identity in the future, Christine views relationships as dynamic and her own sexual identity as constantly in flux. “I’ve experienced so many things in the sexual spectrum and it got to the point where the only thing I hadn’t experienced was a long-term monogamous relationship — so this is the new radical thing for me!”