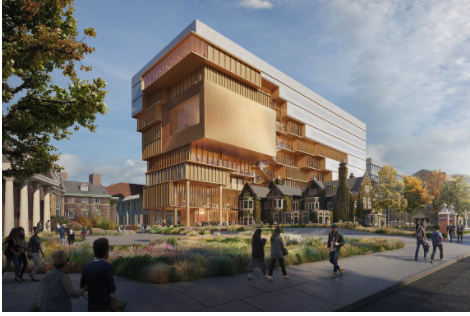 Proposed building to bring together academic and public life in Toronto

A new building for the University of Toronto (U of T) is in the works to be situated at 90 Queen’s Park — located at the intersection of Bloor Street and Queen’s Park. This new building plans on becoming a hub for both urban and cultural engagement, and as such the new structure will be a connector between U of T’s campus home and its neighbouring public life buildings.

The proposal for this nine-story building, designed by renowned New York-based architects Diller Scofidio + Renfro, is currently being considered by the university governance. The plan for the construction is to create, according to the architect firm’s website, an “urban and cultural hub bringing together nine previously dispersed departments — including the School of History, Music, Law, Near and Middle Eastern Civilizations, Islamic Studies, Jewish Studies, and a home for the new School of Cities — into a single building.” In developing this plan, Diller Scofidio + Renfro will be working alongside Toronto-based firm architectsAlliance and ERA Architects as the team’s heritage consultant.

With this new space to be positioned between Bloor Street and Queen’s Park, the building will be on the site of the McLaughlin Planetarium which closed in 1995. Also adjacent from where the construction is to occur is Falconer Hall — a historical building part of the Faculty of Law dating back to the 1900s. According to Diller Scofidio + Renfro, Falconer Hall will allow for an “eroded façade” that will shape the new building, bringing together the old and the new.

Internally, the building is expected to have “a café positioned at ground level with a multi-story atrium linking clusters of lounge spaces, study areas, and meeting rooms. On the upper floors, the music recital hall [will feature] a large window that [will provide] south-facing views of the Toronto skyline. Meanwhile, above the hall, a 400-seat event space [will offer] similar city views.” As such, this building will ideally mix cultural life with academia to become a gateway between the campus and the wider city.

As far as sustainability goes, “the building will adhere to the American Society of Heating, Refrigerating, and Air-Conditioning Engineers’ sustainability standards.” Furthermore, U of T’s Chief of University Planning, Design and Construction states that the new building will “use roughly 40% less energy than a conventional building of this type … The dominant issue right now in terms of sustainability is minimizing the carbon footprint of [U of T’s] buildings and faculties.”

The main goal of the new building is to create a sustainable landmark designed for both cultural and academic spaces. As U of T President Meric Gertler mentions in a statement to U of T News, “this stunning architectural landmark will provide the University of Toronto with an invaluable opportunity to create a meeting space for scholars and the wider city around us.”

A concrete date in regards to when construction will begin has not been given as of currently, but production can possibly be expected come 2020.

The Mike has reached out to the University of Toronto Students’ Union for further comments.