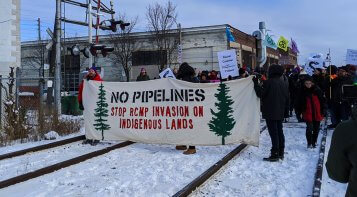 The struggle for indigenous autonomy has once again shown its steadfastness in the response to forced policing of Coastal GasLink (CGL) protesters on Wet’suwet’en territory in British Columbia. The CGL pipeline proposed by its patron energy company, TC, is a natural gas pipeline projected to run through northwestern British Columbia. Not only will the pipeline itself run through the territories of the Wet’suwet’en, but the construction it requires will also require entry into a few of the established Wet’suwet’en camps, most notably the Unist’ot’en healing centre.

The key players of this back-and-forth battle are the residents of the Wet’suwet’en territory and Hereditary chiefs of the Wet’suwet’en territory, the Royal Canadian Mounted Police (RCMP) and the Canadian government, and the elected chiefs of Wet’suwet’en who hold a centrist point-of-view. This shows that the resolution of this conflict lies in an understanding of origin of the indigenous grievances, as well as an evaluation of compromise.  This conflict is quite a nuanced one and it is difficult to attribute the unfolding of the events to one specific reason, mainly because the conflict cannot exist in isolation from its environment.

Through repeated conflict and illusion of resolve, the Wet’suwet’en have taken it upon themselves to mobilize and push for the attention they rightfully deserve. The most recent escalation of the conflict between the Canadian government and the First Nations of the Wet’suwet’en territory resulted because of the forced entry of RCMP forces with the aim to put an end to the protests which have halted the pipeline’s construction. What could have been characterized as a form of civil disobedience and nonviolent protest to this infringement was criminalized by the B.C. Court in the beginning of January, and therefore led violent enforcement of this order by the RCMP. This aggressive raid on the blockades taking place on the proposed construction sites has then unraveled into a series of nationwide protests against the infringement on indigenous sovereignty.

The events that have unfolded through this struggle summarize the incompatibility of the interests of the settler Canadian government and indigenous rights and sovereignty. Though the rhetoric of respect for indigenous land and the autonomy granted to its inhabitants is present (this is of course taken with a grain of salt) in national discourse, this sense of autonomy is immediately challenged when the government prioritizes economic opportunity. This compromise on respect and sovereignty by the hereditary chiefs of the area does not shy away from showing that economic interest and prosperity seems to trump this rhetoric of respect.

But then how does this change if the response of the indigenous communities themselves is no longer unified? According to the National Post, the decision to allow the pipeline to be built has been approved by the elected council established by the Indian Act, but not by the hereditary chiefs of Wet’suwet’en. The elected chiefs argue that this project provides the community with a source of income and financial support that allows them to become more self-reliant. Though the argument for a source of non-federal financial support is an important one, it is immediately contested with the hereditary chiefs’ claims about their legitimate authority over the land. The hereditary Wet’suwet’en chiefs argue that the pipeline covers more land than is under the jurisdiction of the elected council, and therefore does not justify the decision-making of the council.

This split poses another problem that further complicates the argument as it questions the body of authority that created the elected council, and the decision-making process; especially because it seems that, in this particular moment, it favours the regime of the Canadian federal government and Canadian economic interest. The government’s creation of an elected, democratic representative body only further plays into the superiority of the colonial governing structure, a governing structure that is given more legitimacy than traditional governing structures. And this, therefore, problematizes the pursuit of economic interest at the cost of indigenous land once again. But with the efforts of the Canadian government to establish a democratic body that speaks partially for the interests of the Wet’suwet’en, can they be held accountable for respecting the council’s decision?

Arriving at a resolution that accounts for the authority for the elected council, the Canadian government, and the hereditary chiefs only gets more complicated the more it is grappled with. The escalation that resulted in the forced entry of the RCMP, and the arrests of indigenous protesters shows that this conflict must be dealt with from the ground up. Meaning that, the negotiations over approval to build not only need to be re-visited, but that the governing bodies in the area need to be re-evaluated as well. Though arriving at a fully polarized approval for the CGL is not expected, the choice to validate the select governing body that does approve it does no good for the government’s relationship with the First Nations.