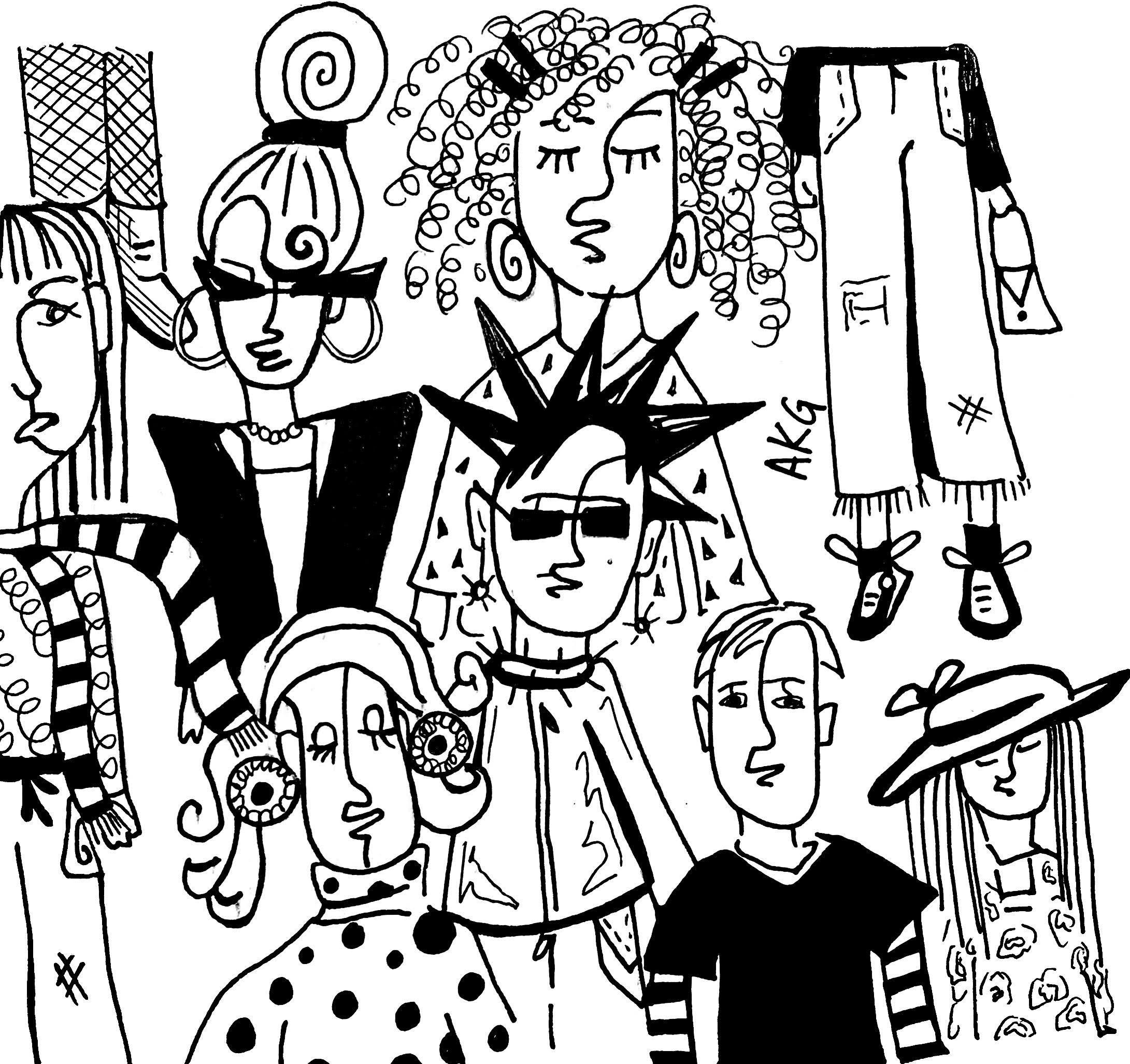 A look into the youth’s expression of self

Culture defines entire generations as it puts forward the opinions, ideas, and hopes that a group of people come to share. Culture is commonly linked to one’s country, as national culture is something that differentiates, or relates to an extent, citizens of different nations. And this is what culture is ultimately for: to help people define and express their identities.

But, how can one broad ideology come to define the multitudes contained in human beings? Mainstream, normative culture has proved insufficient for reflecting the hopes and ideas of the nearly eight billion people on this planet. So, what do the rebels actually do? They form their own cultures, go against the status quo, and ultimately define their own identities. For these alternative identities, alternative cultures are made.

The rise of alternative cultures has allowed for greater expression of creativity, as well as the opportunity to dissent from monoculture, for young people who have had until now a limited say in how our world is run, and how our society is defined. Although voices like Greta Thunberg’s are gaining traction, there still remain those who put them down and do not take them seriously, as the exchanges between Thunberg and American President Donald Trump demonstrate. Modern society ostracizes those who stand apart, but with strength in numbers, no matter how small, those following alternative cultures find solace within their own groups. The increasing push of alternative cultures from the margins to the central, mainstream culture is especially significant, as it indicates that viewpoints and tastes other than the general are just as valid, and further, valid enough that it spreads to larger society. People who feel and think differently are not alone, but rather have the potential to change the very way our world perceives things. As alternative cultures rise, and have risen in the past, young people as spectators and participants have more choices, more role models, and more courage to dare to act differently and dare to express on the outside what one truly feels on the inside.

Fashion and makeup especially have proven to be ways in which young people express their dissent, or even just flaunt their creativity. The streets of Harajuku showcase the latter. Japan is a land of extremes, known for its orderliness and uniformity, as well as strict dress codes; yet it is also being known for some of the most extreme expressions of self. Tokyo’s Harajuku neighbourhood became world-famous for such crazy fashion, as countless magazine features show, where in a sea of black business suits, young girls would be seen sporting a bright pink Hello Kitty skirt and electric blue hair. Some popular trends include the “Lolita” style, which draws inspiration from Victorian ball gowns, as well as cosplay, a global phenomenon in which cosplayers dress up in elaborate costumes (usually designed by themselves!) as their favourite characters. Cosplay especially has spread, as shown by the numerous cosplay conventions in Canada alone. The best part about Harajuku-style culture especially is that it exists in multitudes; goth kids can be found right alongside preppy kids, cosplay alongside retro fashion. Everyone can find their own place on the streets of Harajuku.

Another notable example is punk culture, and the kind of statement pieces that it includes, such as mohawks, dyed hair, clunky boots, plaid pants, and chains, which are still considered stylish today. Now, anyone can dress in a punk style, but in the past the movement held explicit political connotations. Beginning in the United States and the United Kingdom in the 1970s, the punk movement’s popularity today is a great example of how a niche subculture can gain enough popularity to enter the mainstream. Historically, most of the members of punk culture were in their teens and 20s, and it became a way for them to express their dissatisfaction with the world around them, and how they were being forced to act. Punk became the outlet for revolt against prevailing norms, as the movement was essentially a rejection of the rise of capitalist values in the Western world, and of the money-making system that everyone was conforming to. As Matthew Worley says, punk “provided a cultural form that invited creative innovation, facilitated room for social or political commentary, and offered the basis for an alternative lifestyle beyond the perceived mainstream.”

Being punk meant that one held little care for rules and regulations, so there was a real enthusiasm for living simply for the moment, a value which is still relevant for many youth today as the money-making pressure continues. Even in the past, at the height of the punk movement, it held important political power as well. In 1970s England, the working class rose against the government, transforming this period into one of protest and strife. Punk played an important role during this time as many popular punk bands joined the demonstrations, such as the Sex Pistols and The Clash, thus encouraging their fans to take part. Young people thus became politically important, a force to be reckoned with, as they fought to have a say in how their country was run. Punk inspired the young generation to care about politics, as Colin Revolting relates, “How did punk’s politics affect the fans? In my experience The Clash and the [Sex] Pistols articulated, and made attractive, opinions and politics that the fans held already but weren’t present in any popular collective form. For example, the politics of anti-racism, anti-police, opposition to unemployment, … ” all values that have since been passed down to our modern generation.

How can you talk of expressing yourself freely, of being unapologetically yourself, of alternative cultures providing the youth with an actual voice, without mentioning drag culture? While drag culture may have entered the mainstream now thanks to the tireless work of RuPaul and the reality show RuPaul’s Drag Race, it had older and much humbler beginnings as drag queens worked in underground clubs and bars starting back in the 1930s. Although faced with much verbal and physical abuse that exists to this day alongside the tirade of homophobic hate comments on social media, drag queens continue to use this outlet to hone and showcase their creative skills, whether it is makeup looks or unique costumes. Drag culture has had such an increase in popularity in recent years that it’s affected pop culture; witty remarks made by the queens on Drag Race have entered the lexicon of young people, and gifs of them “throwing shade” have been posted by hundreds on social media. But even beyond that, the rising popularity of drag culture allows what once was almost completely taboo to be shown on television screens everywhere, blurring the restrictions and stigmas surrounding gender and sexuality. Now that drag culture is a constituent of mainstream culture, young people everywhere are made aware that drag is a mode of expression that is available to them, and that they shouldn’t be afraid to try it as not only does it come with fame, but also economic gain with the creation of spin-off shows about drag (AJ and the Queen is now streaming on Netflix).

There is no doubt that drag culture, spearheaded by the efforts of RuPaul, has become a phenomenon in its own right, letting people know that they should be true to themselves, and especially (in the words of RuPaul), “If you don’t love yourself, how in the hell are you going to love somebody else?”

It’s quite amazing to see how these alternative cultures, although formed in completely different parts of the world, have influenced young people of various nationalities, genders, sexualities, etc. With the rise of social media, the spread of ideas, culture, and fashion is so rapid that you do not have to be in Tokyo to partake in cosplay culture, for example. Alternative cultures have become global because young people from all nations, all walks of life, share the same worries and sentiments, the same problem of not being able to open fully. Zubiya Burney, a Life Science student from Dubai, especially loves drag culture, something that she discovered through RuPaul’s Drag Race on Netflix, to the extent that she now regularly attends drag shows in Toronto with her friends. When asked why she likes drag culture and if it has influenced her, she replied:

“Drag, and especially popular drag as seen on Drag Race, has an amazing shock factor. Queens will show you concepts and displays of fashion that you just don’t see anywhere else, done so well. From the hair to the nails to every piece of an outfit, they construct looks that are so tailored to sell a fantasy. Some queens make a better woman than I will ever be. This fantasy has an effect of lifting the viewer to a realm of reality so removed from society that it operates in its own sphere. Added to that is the attitude of the queens. Many of them have been through adversity, and use drag as a form of expression — to be themselves to the fullest, in a way that they can’t do in the normal realms of society. Drag gives them a safe space to be creative, eccentric, and free, while at the same time producing highly polished pieces of basically wearable art (outfit, hair, makeup). From this I feel empowered (in my own, much more low-key way) to express myself through my makeup, my accessories, my nails. Drag preaches loving yourself. Drag preaches transformation for the sake of finding yourself. We all do drag in some form every day, and from drag I’ve learnt to be more adventurous because why not? Why not express yourself? Why not wear something a little shocking? It’s all about self-expression and self-love.”

Although the world in general has become more accepting of different viewpoints than before, it still does not stop putting people in boxes, in easy-to-read labels that will help them judge a person. Alternative cultures are as relevant today as they were at their onsets because young people still need outlets and communities to reassure them that being different is okay. And as these alternative cultures gain mainstream popularity, young people do not need society to define them anymore, but can come up with their own definitions.