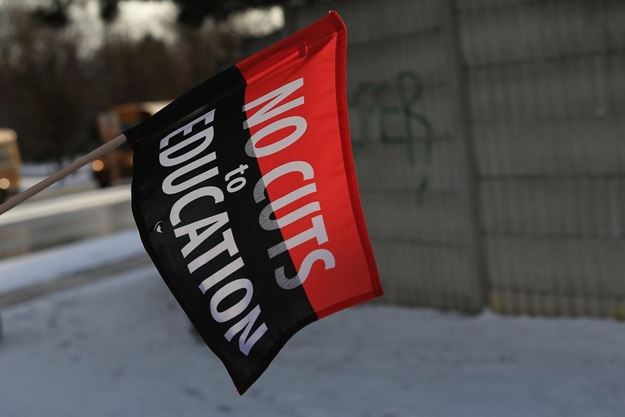 It’s hard to walk across the University of Toronto (U of T) campus without your eye catching the grand, pale-bricked building that sits parallel to the greenery of Queen’s Park. It is even harder to find a U of T student who has not witnessed or participated in a protest on the front lawn of the same building. The Ontario Legislative Building is home to our province’s Legislative Assembly and it hosts the government that has repeatedly told teachers, students, and parents that primary and secondary education warrants cuts to funding instead of investments.

In March 2019, the Ford government announced a series of cuts to education across the province. Outrage broke across Ontario, leaving educators, parents, and students concerned for the future of Ontario’s plan in education. The Ford government announced cuts to capping wage settlements, increases to classroom sizes, mandatory e-learning, the elimination of thousands of teaching positions, and the elimination of support programs for the most vulnerable students. After months of failed negotiations and bargaining between Ontario’s teachers’ unions and the government, education unions across Ontario released overwhelming numbers of support in favour of strike action. During the week of January 20, a series of strike action walkouts took place amongst primary and secondary schools across Ontario.

Teachers and education workers are outraged with the provincial government’s announced cuts and have reason to be. The implementation of the Ford government’s changes will cause harm to our province’s education system and will substantially injure students’ potential in the classroom. The Ford government is looking toward education as the solution to fixing the provincial budget, but fails to realize that it will be operating at the detriment of students. Under the proposed cuts, class size averages in Grades 4 through 12 are expected to increase to a maximum of 40 students, tarnishing teachers’ and education workers’ ability to provide engaging learning conditions and adequate support for individual student needs. The increase in class sizes ultimately means the loss of teaching positions across the province, leaving thousands of teachers unemployed. In advance to this, the government alleges to cap teachers’ wage increases by 1% and removes the right for teachers to negotiate their pay without interference. This speaks to how much the Ford government values (or doesn’t) the work of educators in the public sector. Moving forward, the proposed withdrawal of services for students with special needs and mental health initiatives regresses student potential while jeopardizing their future success. The provincial government claims this plan is set to “build an education system for success,” though it sounds like quite the opposite.

After more than two decades, every teachers’ union in the province will take part in job action involving work-to-rule and rotating single-day strikes. This means elementary and secondary students will be out of school for a day, leaving parents of young children scrambling to find childcare. While writing this, I can’t help but think what kind of message this sends to our society. How do students feel, knowing that their education is being jeopardized due to the provincial government’s inability to listen to their needs? How do parents feel, knowing that their government has left their children home for the day? How do teachers and education workers feel, knowing that their career is unworthy of government advocacy? In a recent press release, Sam Hammond, President of the Elementary Teachers’ Federation of Ontario, said, “We have no choice but to commence rotating strikes,” as a way of “forcing the government to get serious about negotiations and the future of public education.” As tensions continue to rise across the province, strike action remains the only viable way to pressure a tentative agreement, even if it means compromising taxpayer’s daily schedules.

As a student with generations of educators in my family, I have come to understand first-hand the implications of cuts to education and the repercussions of voting for a government which fails to see education as an imperative and worthy part of our province’s future. The Ford government’s changes to education are unwanted guests, and we will not stand for it. Ontario’s education does not need cuts. It needs a government that is willing to invest in shaping the minds of tomorrow and a premier who is brave enough to lead our education system forward, not sabotage it. For further information and updates on the Ontario Teachers’ Strikes, visit knowmore.ca.