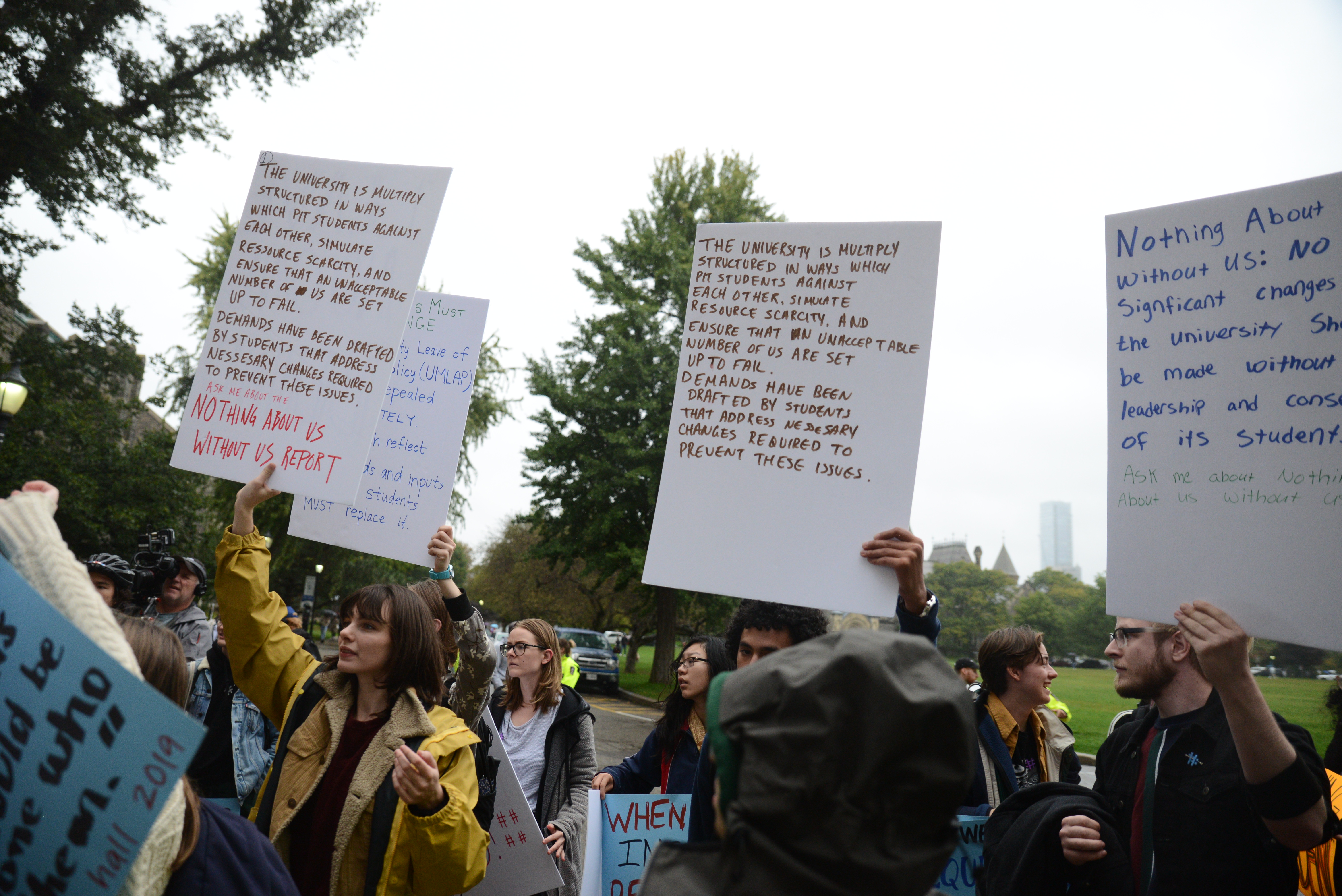 The following piece is partially adapted from an earlier piece, Another Suicide on Campus: A Story We Never Want Again, which was published online.

Very recently, University of Toronto (U of T) students would check their messages to learn about the haunting news once again. Friday, September 27, 2019, close to 6 p.m.: Another student had died. Another Bahen incident. Another suicide.

It was around 8 p.m. that evening when I heard the news. I was at work and briefly checked my messages when multiple group chats were firing off — people sharing the news and asking if their friends were all right.

A friend of mine saw the paramedics performing CPR. Very soon — too soon — the same paramedics would confirm the death.

That was it. Another person’s life — over. Forever.

While many people I knew — and many more I didn’t — convened for an emergency student meeting at Sidney Smith which began at 8 p.m. and would go into the early morning, I would be stuck at work for another few hours. Mercifully, it wasn’t that busy at work that shift, so I was able to check in on my friends and make sure that everyone was alive (even if distressed or unwell, given the circumstances).

It’s horrible, isn’t it? How we’ve reached the point as a community where we have to check in on our friends after incidents like these just to make sure they’re alive?

Suicide is personal to me. I’ve had my own experiences with stress, anxiety, and grief — some of this grief related to suicides. In my first year, I experienced a close friend attempt suicide but was only saved by a physical intervention by our friends who were nearest at the time. I was friends with one of the students who committed suicide earlier this year. What’s more, as someone pursuing a Specialist in Peace, Conflict and Justice Studies and a Minor in Computer Science, each of the last four on-campus suicides was (in one way or another) connected to one of my programs. Each of them happened in a space on campus where my friends and I frequently spend time.

This is the fourth time that a U of T student has committed suicide in the past 16 months, and (according to CBC’s The National) the ninth time U of T has lost a student in the last three years. Each of these suicides was a tragedy that rocked our community to its core. These are only the ones we know of, let alone any that occurred off-campus that have gone unreported by the university.

This early in the academic term, the suicide of September 27 was especially a shock, and seems to be decisive evidence — as if the first, second, and third in the last 16 months weren’t already for the administration — that our campus is facing a severe mental illness epidemic and a deficiency in essential mental health care and services. But despite all this, on Thursday, October 3, the Academic Board of the Governing Council of U of T voted against a motion to add a discussion about recognizing the mental health crisis on campus — a motion not to actually recognize it, but just talk about recognizing it. That motion failed with 20 out of 25 votes required — more votes for a discussion on student mental health than ever I’ve been told, but still not enough.

Monday, October 7, saw a rally organized by the U of T Mental Health Policy Council outside of Simcoe Hall while the Business Board met. With a stroke of a pen, the members of the Business Board of the Governing Council could choose to allocate more than the $3 million that they’ve invested in additional funding in mental health services in the last two years (equivalent to 0.1136% of the total funds raised by the Boundless campaign). They could choose to support the students, faculty, and staff of the university by providing the resources we need to make meaningful changes in our system. They sure didn’t in their last meeting.

The Business Board is slacking and is neglecting its commitments not only to students but to the entire U of T community. It refused to even discuss the topic even as four members of the U of T community gave heart-wrenching, informed, personal narratives, as students and faculty who have been affected by mental illness and have seen others been affected by it. But it continued to stay silent on the issue, despite calls for discussion and action.

Meanwhile, on World Mental Health Day (October 10, 2019), the City of Toronto asked the federal government for $300 million ($1 for every $1 invested into physical health) in funding for mental health services and initiatives in the city. University of Toronto Students’ Union President Joshua Bowman attended and spoke in support of the resolution, particularly from U of T students’ needs for better services. That same day, the Ontario government announced nearly $40 million to advance student mental health.

This still may not be enough, but it’s a damn good start. The University of Toronto needs to start doing the same and start investing some of its $2.641 billion from the Boundless campaign — not to mention the other funding it gets from donors and the government and from our student tuition fees. We’re worth more than 0.1136% of your so-called historic campaign. We’re worth it all because we’re the students that make up this university. We’re worth it all, because we are here to study, and work, and play, not to suffer, and struggle, and die.

So, U of T, and every affiliate and subordinate body: I call on you to make every change in your power to address the mental illness crisis on campus and transform it into a community of mental wellness. Or — as students discussed at a recent event — changing the narrative from U of Tears into U of Thrive.

Because we’ve already asked you, “How Many Lives” it will take before you recognize and address your mistakes. The U of T Mental Health Policy Council has made highly specific and actionable demands — including in the report Nothing About Us Without Us — that (to date) you have failed to act upon.

Students are coping in ways such as Healing Hearts Through Art, which is a grassroots initiative for community healing through art founded by a University of St. Michael’s College student. But you see, we shouldn’t need to heal because we should never have been hurt in the first place by this university, its failings to us, and its lack of mental health services.

So I implore you, please act now. Create the meaningful and systematic and informed changes necessary to transform this system into one where students are primed to succeed, not to kill themselves. Transition the narrative around the competitiveness of our academia into one of cooperation. Allocate more funding to our mental health services until there is no student left behind waiting up to six to eight months before receiving an appointment with Health and Wellness.