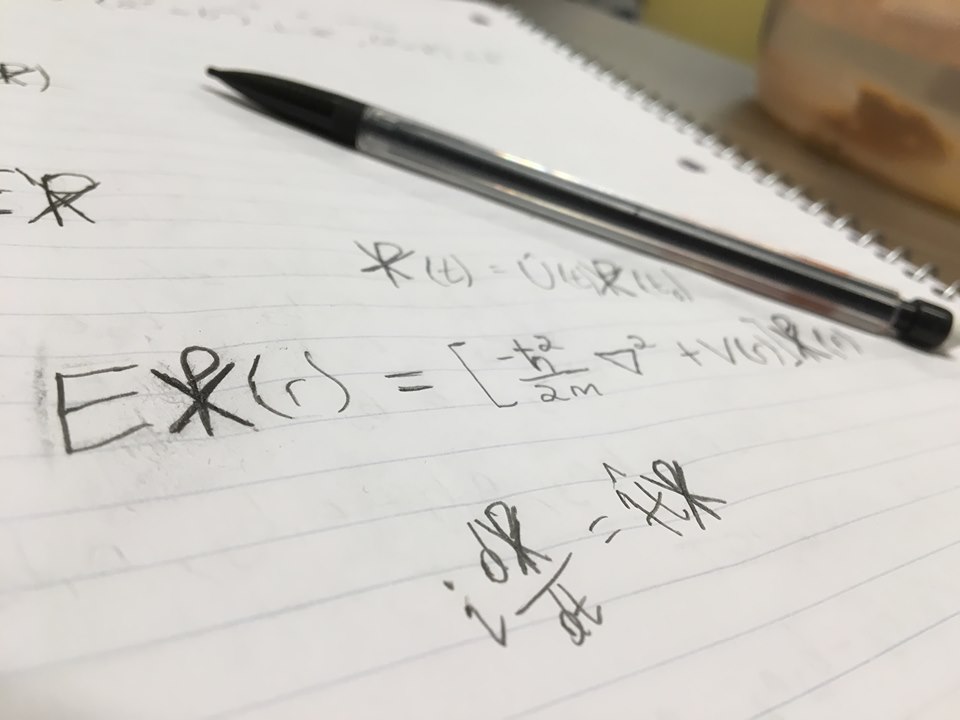 A “spiritual journey” toward a better understanding of the Gospel

There is an idea found in quantum theory that I believe can teach us more about how to share the Gospel. I believe there is a beautifully mysterious connection between electrons in space and the words we use in our speech and writing, but before I share that, I must provide some context.

Over the past year, I have been on somewhat of a “spiritual journey” to find which branch of Christianity can provide the most truth and the closest experience to the church that Jesus intended to establish at Pentecost. I understand that to a Roman Catholic reader the answer may seem obvious, but you must understand that I was raised in a Protestant family. As logic would follow, that makes me a Protestant. It’s only since I began attending St. Mike’s that I’ve seen the other side of the family tree. Now, finding the truth has become paramount to me. My free time in the past year has been spent investigating just about every form of Christianity that humanity has to offer; I have been as deep as YouTube, Wikipedia, and Encyclopedia Britannica can possibly go. You might guess that doing this has caused me to sway in my beliefs in various ways and you’d be right. However, through all of the theological turbulence that I’ve put myself through, I’ve been able to keep my faith in Christ constant. Part of me began to wonder how someone who doesn’t know Christ could possibly navigate these waters. But then another part of me remembered electrons and a concept known as “quantum superposition.”

Quantum superposition is an idea that informs much of how people view quantum theory. Without getting bogged down in unnecessary details and complex scientific diction, the concept can be summarized using a famous theoretical experiment known as “Schrödinger’s cat.”

Erwin Schrödinger, a physicist of the early 20th century, designed a thought experiment in which a cat would be placed inside a box that contained a vial of poison, a decaying radioactive substance, and a radioactivity detector. The vial of poison would be released once a certain amount of radioactivity was detected from the decaying substance and the cat would be killed. It sounds rather macabre but here’s the point: the time it takes for the poison to be released is unpredictable, so until the box is opened, the cat is both dead and alive. Until the state of the cat is measured, it is in both states. In the case of an electron, until its position is measured, it exists right next to the atom to which it belongs, yet also exists billions of light-years across the universe. In the same instant, the electron can be in two very different positions.

So how can this inform our understanding of how we share the Gospel? Just the same way that Schrödinger’s cat is both dead and alive, so too are the people in our lives who have not yet received Christ. Until we as followers of Christ provide a measurement, their position remains both near to Christ and as far from Christ as possible. With this in mind, the question now becomes: what do we use as our measurement, and how can we make an informed measurement?

John Henry Newman is quoted to have said that “Conscience is the aboriginal Vicar of Christ.” This statement is part of a larger comment on how the conscience plays the role of a messenger for God. If this is true, the focus of evangelization now becomes figuring out how we as humans can inform someone else’s conscience. I am going to suggest that there are ultimately only two things that inform the conscience: the words of other people and personal experiences with God. For obvious reasons, personal experiences with God inform how one internalizes their faith, but the words of others, whether spoken or written, inform faith just as much. A Christian is constantly influenced, positively or negatively, by the words of other people. Whether in the form of books, sermons, or quotes, what other people have to say about their faith informs the way in which a Christian encounters God. The purpose of saying this is to remind us that our words have an impact on others and the way in which they may approach a life of faith in Christ. Our words are indeed the measurement tool we can use to reveal the “position” that other people are in.

Allow me to tie things together with an example from the life of the Apostle Paul. In the Book of Acts, when Paul is in Athens, he is invited to speak to a group of Greek philosophers, Epicureans and Stoics alike. When Paul speaks, he explains to the Athenians how they have come close to worshipping the one true God and references an altar he saw in the city inscribed: “TO THE UNKNOWN GOD.” The Athenians built this altar to a god they knew existed but did not know personally. Paul explains that he knows the “unknown god” and that by worshipping at their altar, they were ignorantly worshipping the one true God, the God of Israel. There is an all-too-real parallel here with Paul’s story and the electron in space. The altar to the Unknown God was both an altar to a false god and an altar to the one true God at the same time; just like the electron, it was right where it was supposed to be and as far away as it could possibly be at the same time. If Paul hadn’t used his words to measure the spiritual position of the altar, no one would’ve been saved that day. It was only because Paul used the opportunity God provided him to share the Gospel that he was able to make disciples in Athens.

In quantum superposition the emphasis and focus of the idea is that something can be in two completely different states at the same time. When it comes to someone’s salvation the concept from quantum theory is still present but the emphasis is not on the fact that someone is both saved and not saved, it’s on the fact that someone could be saved. It’s great to know that they are both alive and dead at the same time, but it’s even greater to know that they could be alive. As such, a Christian is called to share their experience with God in the hope that it could move someone to seek a relationship with Christ. The only tool a Christian has to save someone is their words. Even if someone is inspired to follow Christ by the way a Christian lives, the Gospel inevitably needs words to be shared. Somewhere out there in the ether of our language is the perfect combination of words to convince someone to follow Christ — in fact, it is a mathematical probability. I am not telling you to run around trying every possible combination of words in the hope that you will somehow miraculously guide everyone to Christ. I am telling you to make the most of the opportunities that God provides you to share the Gospel like Paul did. After all, it is only through an informed and careful measurement that the location of the electron can be revealed.