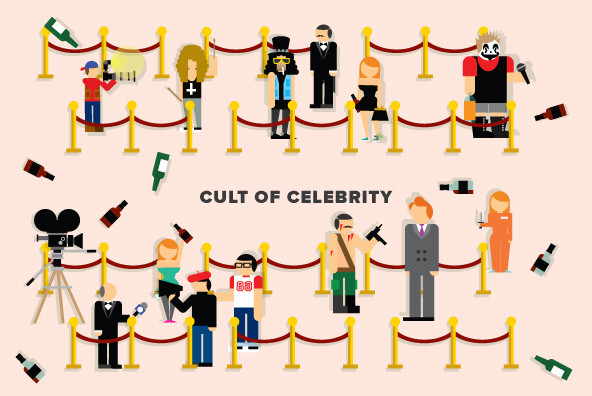 Has the pandemic exacerbated celebrity worship?

You can find them on prayer candles and posters; on movie screens and cell phone backgrounds; billboards and T-shirts. Merriam-Webster calls the cult of celebrity “the tendency of people to care too much about celebrities.” Typically, the term cult refers to the usually undue and excessive veneration of a person or object by a group of people, completed with manipulation, coercion, and control from higher-ups. Cults are distinct from traditional religion, and, as a result, they can be elusive and difficult to define. The cult of celebrity is no exception.

Understanding the cult of celebrity instead as a ‘celebrity pantheon’ is one way to parse how our society tends to approach celebrities in light of similar patterns in history. In his book, Battle for Mythic Britain, Christopher R. Fee calls a pantheon “an overview of a given culture’s gods and goddesses, [which] reflects not only the society’s values but also its sense of itself.” In a sense, celebrities are the gods and demigods of our day. We look up to them and mimic them, we gather in their presence and vie for their scraps, like Scarlett Johansson’s used tissues or John Wayne’s toupee. We make up stories about them in tabloids and fan fiction building up personas and compiling mythology of information on their lives, as they connect with one another and with ourselves.

In Amanda Hess’ New York Times op-ed entitled “Celebrity Culture is Burning,” she describes celebrities as liaisons between the general public and the smaller number of the actual wealthiest people in the world. When the world moved online and celebrities took to broadcasting PSAs from the shelter of their multi-million dollar estates, the public lashed out in frustration. Outcries over the audacity of Gal Gadot’s “Imagine” rendition was profuse, and the deposition of Ellen DeGeneres was swift. One by one icons toppled, masks fell, and cancel culture crossed named off the A-list with zeal. Yet the New York Times article concedes that we are glued to the media on our screens, despite recognizing that celebrities are flawed human beings and are not necessarily worth the time we dedicate to consuming their public lives. Try as we might, our eyes can only flick away from the trending faces for so long.

If celebrity culture is burning, then it is only a matter of time before it is rebuilt. Like in the case of the Roman Pantheon, which burned down for the second time when it was struck by lightning in 110 AD, the pandemic has engulfed and charred the structure of our lives in a multiplicity of ways. Nevertheless, as humans, we tend to ritualize life regardless of our situation. For many of us, being homebound meant increased incorporation of media consumption and pop culture into the ritual of our daily lives. One study by the Nielsen Total Audience Report found that media consumption in the United States has reached historical heights in light of more time spent at home.

In the wake of the overdue realization that celebrities are not especially entertaining from the confines of their own homes, we are left with a decision. Are their antics more interesting than our own lives, and how much of our own lives are we willing to give to them? Recognizing how similar our cultural obsession with celebrities is to ritual worship is a step towards realizing the danger of that obsession. Post-pandemic, the paradigm shifts we bring with us will be telling. I hope that one of those is a shift away from the cult of celebrity, in order not to dupe ourselves into rebuilding a pantheon that ought to remain in ruins.