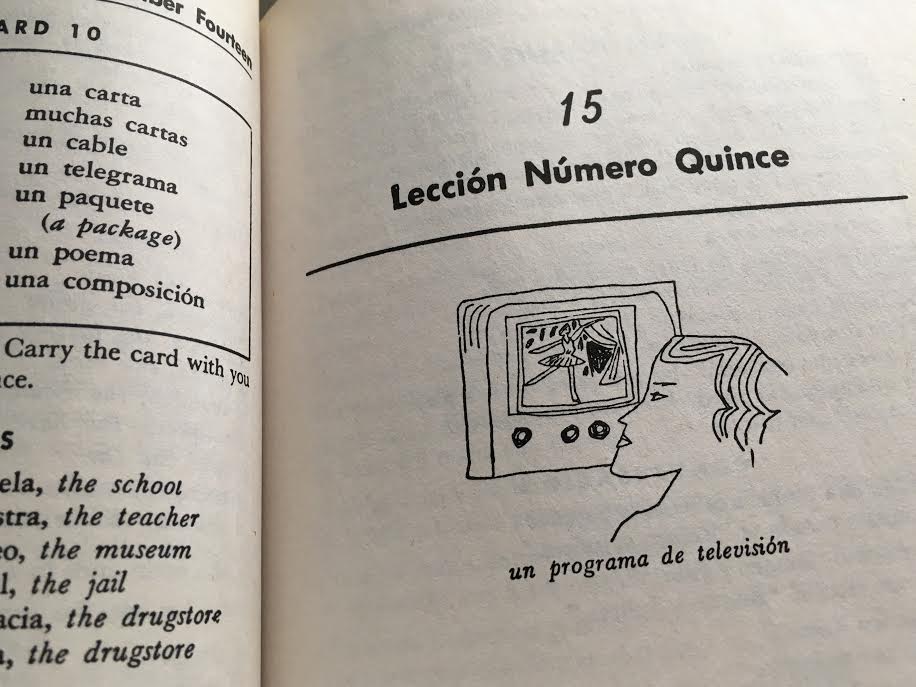 Back in January, emboldened by a “new year, new me” mentality, I went around telling my friends that I had decided to learn Spanish. I’d bought a butter-yellow book from the BMV called Madrigal’s Magic Key to Spanish: A Creative and Proven Approach, with original illustrations by Andy Warhol. Madrigal promised to have me reading, writing, and speaking Spanish in a few short weeks. Mine was a foolproof plan: read this book, surround myself with Spanish media, and achieve fluency. But a few weeks in, between my assignments and other commitments, I was finding it difficult to pummel through Lección Número Uno. My original zeal, while not dead yet, was waning fast. There just wasn’t enough time in a day.

That was my mentality, until one Wednesday, as I watched snow flurries fall from behind the window of the Jackman Law Building’s cafe, I got an unexpected text from a friend. He had sent me an uplifting Spanish song: one that would help me build a playlist of music, with the ultimate goal of immersing myself in the Spanish language. The song was “Color Esperanza” by Diego Torres, a contemporary classic with a beautiful message of hope. The song had an immediately nostalgic quality, and as I gazed out the window, my excitement to learn was stirred once again. Although my schedule hadn’t changed, my mindset had. Even if I needed to stow Madrigal away for a little while, I could still begin to familiarize myself with Spanish through music.

Now, in self-isolation, the days go by differently. At odd moments, it can seem like there’s almost too much time in a day. But as soon as we begin to feel that way, we ought to realize something else: that with extra time comes so many extra opportunities, like learning a language.

I started watching a Spanish drama on Netflix called Morocco: Love in Times of War. Predictable, soapy, and heart-wrenching, I excitedly informed my best friend about my new find so that we could watch it at the same time — but I also remembered Madrigal, my now-dusty Spanish-learning companion. I remembered “Color Esperanza,” “the colour of hope,” and reset the password for my Duolingo account. What better time than my newfound extra time to dive back into a shelved New Year’s resolution?

You’ve heard it before: immersion is the best way to learn a language. But I can’t really fly to a Spanish-speaking country right now, for obvious reasons. What I’ve been doing instead is a kind of homespun immersion: Netflix (if Spanish dramas appeal to you, check out “Morocco,” “Gran Hotel,” “Alta Mar,” or “Las chicas del cable”), Spotify playlists, language books, online dictionaries, Duolingo, podcasts — there’s an entire world of content out there waiting. Find a subject you’re interested in, and pursue it in the language you are learning. For instance, I love literature, and I eagerly decided to copy out the first page of Gabriel García Márquez’s “Cien años de soledad” (“One Hundred Years of Solitude” — a title that may as well describe social-distancing). The words don’t mean much to me yet, and at the same time they do, because they are my goal on paper.
I can think back now with real nostalgia to the time I listened to “Color Esperanza” in the Jackman Law Building. The chorus sings: Saber que se puede, querer que se pueda / Quitarse los miedos, sacarlos afuera / pintarse la cara color esperanza / tentar al futuro con el corazón. “To know it’s possible, to want it to happen, to get rid of our fears, to expel them, to paint our faces with the colour of hope, to tempt the future with our hearts.” In the midst of this global pandemic and widespread quarantine, holding on to hope is important. Part of that means making the most of the time you’ve been given — even time in isolation. For some, picking up a new language might be a great place to start.