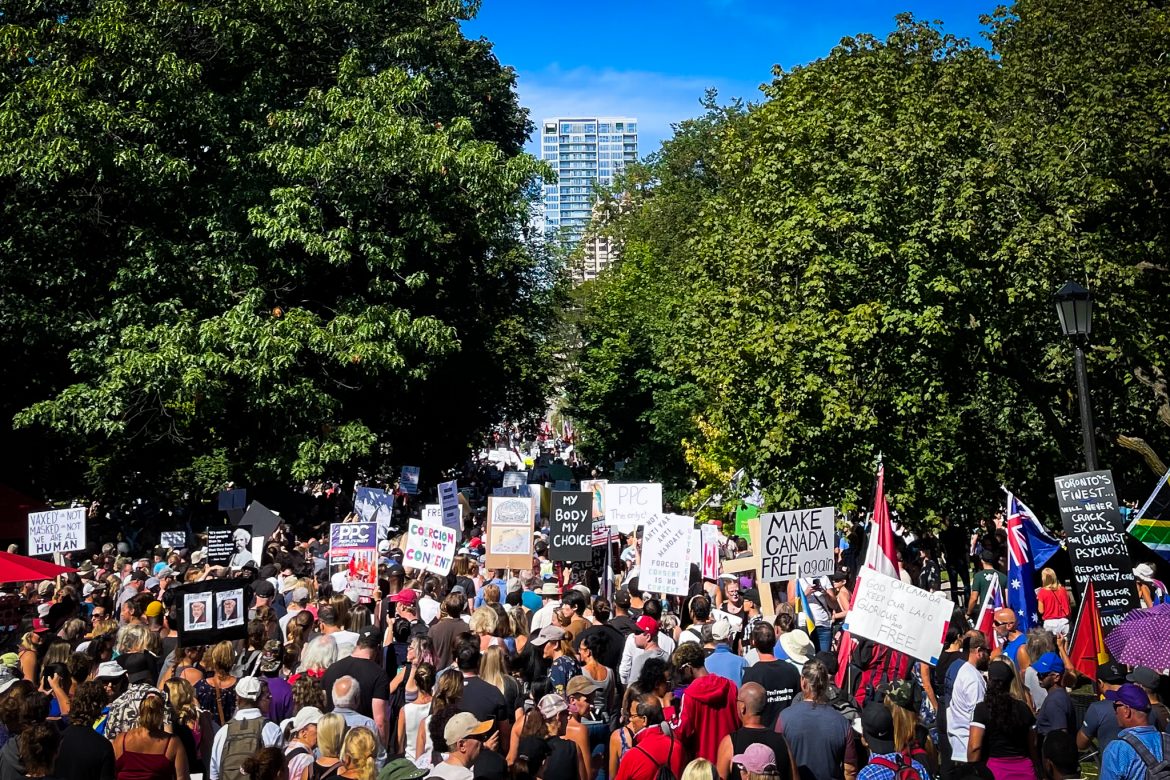 Why do our government bodies take issue with our civil liberties?

The issue of COVID-19 vaccine mandates has become a hot-button issue as of late. All across Canada, provinces have been instituting vaccine passports, which require citizens to be vaccinated in order to participate in certain events. Ontario, for example, now requires proof of vaccination to attend restaurants, bars, nightclubs, gyms, concerts, and other venues and events. Ontario’s guidelines came into effect on September 22.

Closer to home, U of T has implemented its own vaccine mandate for students and faculty on campus, who are required to receive the vaccine or seek an acceptable exemption.

The implementation of vaccine passports by the Ford government has generated outrage from many Ontarians. On Saturday, September 18, a demonstration against all vaccine passports and mandates was held at Queen’s Park, with a subsequent march around downtown Toronto.

Nurses, doctors, police officers, and lawyers, among others, came to speak against the provincial government’s pursuit of vaccine passports. The speakers also targeted other proof of vaccination requirements, particularly those advocated by Liberal Prime Minister Justin Trudeau and Conservative leader Erin O’Toole.

The final voice was the Deputy Speaker of the House, MPP Rick Nicholls, who was thrown out of the Progressive Conservative caucus for refusing to receive COVID-19 vaccination following a caucus mandate by Premier Doug Ford.

When I asked Mr. Nicholls, the Member for Chatham-Kent-Leamington, for his comment on vaccine mandates, specifically on the U of T campus, he replied that vaccine mandates are “absolutely dead wrong” and constitute “coercion.” He cited a violation of medical freedom, stating that “in essence, what they’re saying is ‘we’re the doctor, we know what’s best for you, and therefore you will do what we say or else we will punish you.’” He indicated support for students resisting the vaccine mandate, saying that he is “standing with those students.”

I agree with Mr. Nicholls. Let’s look at the data. According to the CDC, about 9.4% of the U.S. population 0–29 years of age has contracted COVID-19. That’s roughly 11.6 million cases. Of those cases, there have been 3,651 deaths involving COVID-19. Doing the math reveals that only 0.03% of cases among people aged 0–29 have resulted in death. For context, that means around 3 of every 10,000 cases in that age group have thus far resulted in death.

The 2018–2019 influenza season produced a mortality rate of about 0.096% across all age groups. Though that’s for a slightly different group than the COVID-19 data, a picture emerges. The flu has a higher mortality rate for the population as a whole than COVID-19 has for those aged 0–29. Drawing conclusions from this data, death involving COVID-19 is a pretty low risk for most people under the age of 30.

A flu vaccine has never been mandatory for university students or, for that matter, any age group. How does COVID-19 warrant vaccination just so that one can walk into a restaurant or a lecture hall?

Put simply, a governing body that imposes vaccine passports or mandates on its population isn’t telling the full story if it justifies its actions as mere following of the data. The same is especially true when a large proportion of the population is under 30 years old. It seems, then, that this policy is motivated not by science, but by politics and by a specious narrative about the danger of the virus. It seems that the aim is to control and categorize the members of a population, where the compliant are virtuous and anyone else is a threat.

This is why I marched alongside thousands of Torontonians to fight against vaccine mandates and vaccine passports last Saturday and will continue to do so. In a free country like ours, we should have the freedom to deny medical treatment and still participate actively in our own lives. Unfortunately, the University of Toronto, the Government of Ontario, and the Government of Canada all disagree.