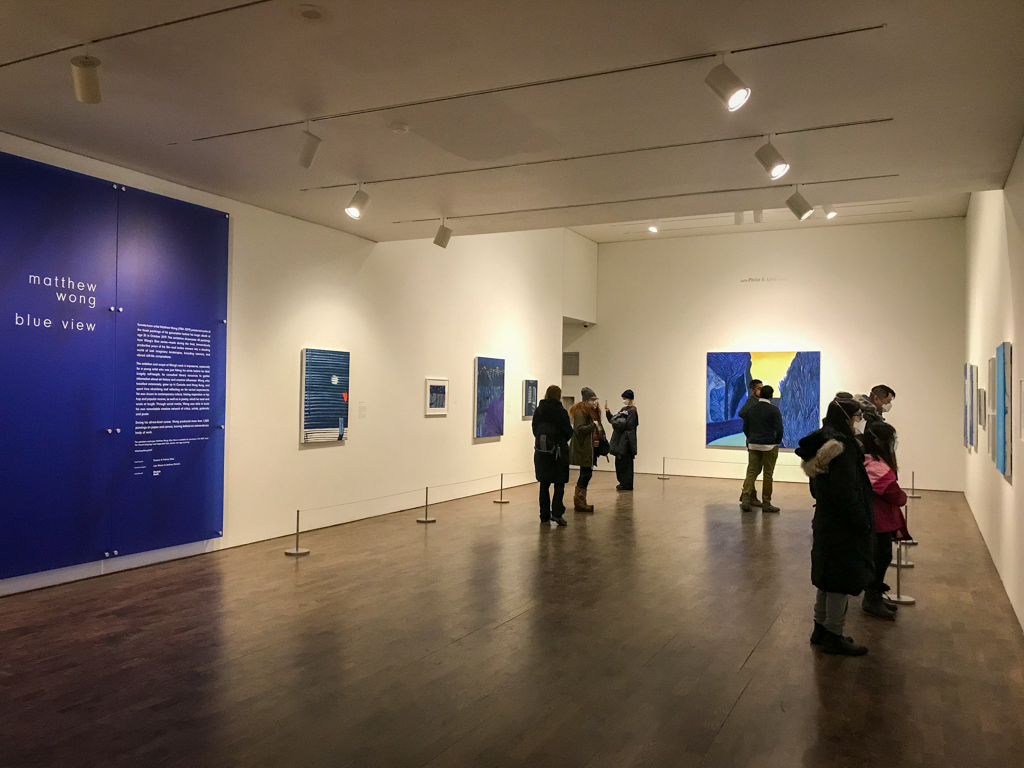 On August 13, 2021, the Art Gallery of Ontario (AGO) launched the first museum exhibition dedicated to Matthew Wong’s work. The exhibition is called Matthew Wong: Blue View. It consists of a two-room block of white walls and wooden floors, with an open space to walk through. One pillar at the back of the second room displays a quote in a narrow, dark blue font from one of Wong’s poems: “A thin blue line is falling asleep on the horizon / As the breeze reaches the end of its lullaby. / I study what’s left of my reflection in the water. / I see now that your nakedness was never mine.” According to the Gallery Book of the exhibit, the poem, “The Shape of Silence,” speaks to a particular moment in time and light: the gloaming, defined three ways by the Oxford English Dictionary as, “evening twilight, “morning twilight,” and “shade, dusky light”.

I have been compelled by Matthew Wong’s work since I had first read about him in the New York Times. There was something in Wong’s deep blues, subtle whites, pinks, and oranges—in his depiction of landscapes, cityscapes, and isolated scenes—that captivated me. He spoke to me as a student. Particularly, as a U of T student, at this time where everything is both broad and narrow, full of different blue shades, and where periods of isolation are finally burgeoning into an old yet unfamiliar territory.

One Sunday, two weeks ago, I decided to spend four hours in the Blue View to finally figure out what it was that drew me to Wong’s art.

The first hour: “A thin blue line is falling asleep on the horizon”

Blue View is not as blue as one might think. Wong’s work experiments with colour in a way that is curious and dedicated but never forgets the presence of time, always delicate and often subtle. I walked in and took my time, looking at each of the paintings displayed on the white walls of the gallery. Overhead white lights cast down on the paintings, sometimes adding to the draw of the way Wong plays with light. In his 2019 piece of the same name as the exhibition, light turns into a vehicle for spatial distinction and emotional cartography. The entire painting is blue, but a shade chalkier than the other more defined ceruleans and indigos Wong tends to use. The painting uses minimal touches to convey the space of a room leading out to a window, with milky-white drapes pushed to the side. Small white specks in a neat arch symbolize the stars, asking the eye to look up, almost to hope, anchoring the viewer in the contrasting vastness of so small a space.

The second hour: “As the breeze reaches the end of its lullaby”

I was standing by a wall, observing Wong’s “Autumn Nocturne” (2018), when two girls called out to me and commented on how I matched with the exhibit (I was wearing my powder-blue coat at the time). Surprised by this warmth, and simultaneously warmed by their engagement with this exhibit, I asked if they would like to sit down for an interview for this piece.

Alea Fontaine and Leona Zuchlinski are two university students visiting each other during their break period. When asked about which paintings stood out to them, Fontaine talks about one of Wong’s central works, “A Dream” (2019). For Fontaine: “It kind of reminded me of where we used to grow up in the town, it’s really far up north [in Temagami, Ontario] but it kind of had two pieces of land beside it on either side and it was like a river going through in the middle.” Zuchlinski adds: “[I]t did remind me a lot of the scenery that we used to see a lot—genuinely it was in the middle of nowhere.” There were only 900 people in their town, the two told me.

When asked about which pieces might relate to their experiences with navigating the pandemic, Fontaine smiles and gestures at her friend: “[S]he’s from Ottawa and she came out here to see me…I guess now that we talked about it, the piece [exhibition] is personal since we both grew up in the same city. We actually tried to get out of there fast though [in] the same way we tried to get out of the little town that we grew up in fast.” She adds that, “it’s almost an isolating feeling to be in there ’cos it’s like you’re seeing what you want to see but you’re trapped at home, right? You want to go out and you want to see the trees and the rivers, and even like, a bustling city, but like, with the pandemic, we couldn’t really do that.”

The third hour: “I study what’s left of my reflection in the water”

I’d been standing for a long time near the end of the exhibit by the time I met Thomas Evans and Lara Backeberg, two exchange students from Bermuda in their senior year of high school. In our brief talk, we circled around colour, and emotions, and the different states of feeling in different locations.

On Wong’s “Blue Night” (2018), Backeberg states that, “it felt like the tree was looking into the room not like the room was looking out on the tree…as you go deeper into the isolation and see the hope as you’re coming out, I feel like the consistency and the colour, but the difference in the piece reflects that mundane repetitiveness, like you’re still inside your thoughts.”  Later, Backeberg relates Wong’s colours to her own experiences with colour: “Bermuda is 24 square miles wide, so you see the sun rise and the sun set every day from any point on the island and it’s always warm colours, and the ocean is blue but it’s a very light blue, almost turquoise. I just feel like when you get here [in Canada], everything seems to have like a blue filter on it – it’s not even mundane because it’s beautiful in its own way, but it’s very different.”

On Wong’s “5:00 PM” (2019), Evans notes that, “the contrast between the whitest pure white of the beam and the room itself…created an almost striking familiarity, because we’ve all seen light shining through, and that one was just sort of hopeful, that sort of sense of brightness.” In relation to isolation and his experiences as an exchange student, he states: “I think the physical, visual sense of seeing the light and the gleam and the contrast, for me, it reflects hope and it reflects looking towards the future and not getting stuck in the past or the present—the melancholy of COVID or whatever. It’s like looking forward.”

Backenberg ends our conversation with her final comment: “I feel like it’s interesting that the art is supposed to reflect isolation because as soon as I walked in, I felt understood. I felt a part of the work, which is an interesting contrast, because it’s about loneliness and isolation, but I felt like I was there…I didn’t feel alone. Compared to a lot of art which I feel like I’m looking at something else, I felt like I was almost looking at a reflection of my own mind.”

The fourth hour: “I see now that your nakedness was never mine”

Matthew Wong is an artist whose work speaks a language that is pressing and necessary to our current time. Our world is blue—I’ve often found it so. While much has already been written on Wong’s personal life and history, I want to focus this piece on the people his work has touched—my small sample size of five people (myself included). Wong’s work does not shy away from a stark display of colour and emotions. He captures isolation with a vividness that turns it into something alive, almost restless. As for hope, he depicts it with a subtlety that makes it real.

I would encourage any reader to take a walk (maybe not for four hours, though that’s up to you) through his exhibit at the AGO (It will be there until April 18, 2022). Walk with his art and walk with the people who do the same—you’ll find yourself looking inwards, outwards, upwards, and around, without going any farther than the two rooms of the exhibition.

All interviews in this piece have been edited for length and for clarity.