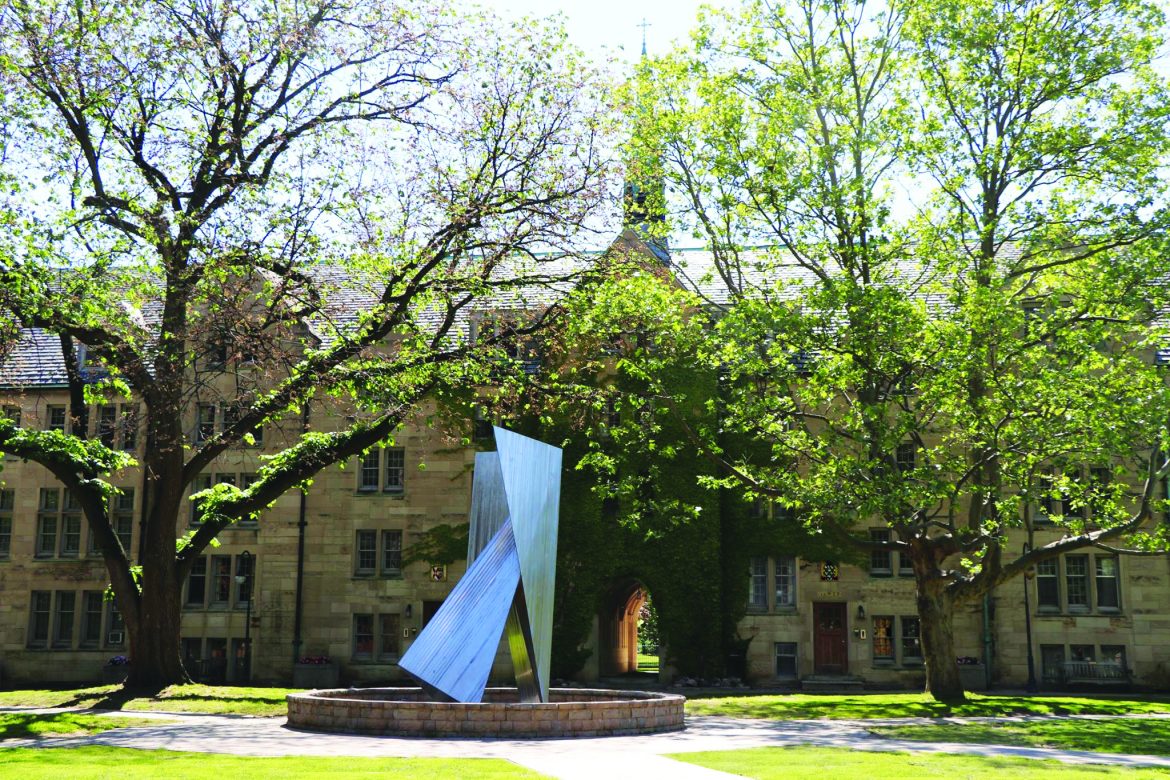 A tribute to Saint Michael the Archangel

In the middle of the courtyard at USMC, flanked by residence halls and historic houses, lies a metallic statue. Its ultramodern design is bewildering to many, who could easily mistake it for an airplane or a tent. Contrary to popular opinion, the statue in the St. Mike’s quad holds significant meaning; at around 5 meters tall and 2 meters wide, it stands as a monument to Saint Michael – the namesake of our college.

Admittedly, it may be slightly difficult to make out Saint Michael from such an abstract form. At best, with the help of your imagination, you can see hints of wings and clothing in the triangular metal sheets. At the very least the statute is imposing and evokes a sense of grandeur. Truthfully, art is subjective, and I can’t even attest to which direction is “forward” for the monument. Yet these observations are supported by the common depictions of the saint in ancient art.

In Catholicism, Saint Michael, an archangel, is believed to be God’s chief angel. He is known primarily as an advocate of souls, an accompanier of the dead, a guardian of the Church, and the commander of God’s army of angels against Satan. Saint Michael is believed to be the saint present at a person’s passing, being a judge of their actions and weighing their fate. Thus, in most traditional depictions, Michael is drawn either holding scales or wielding weapons against demonic figures.

However, none of these attributes are displayed in the statue. Apart from the sign, there isn’t much indication as to what the subject matter really is. Even then, the sign doesn’t say much, other than the original artist (Anne Allardyce), its composition of stainless steel and granite, and how it was commissioned “in commemoration of the one hundred and twenty fifth Anniversary of the Foundation of St. Michael’s College.” Come to think of it, perhaps the deliberately indistinct format is to serve as a symbol of the College’s newer, more secular nature, while still serving as a reminder of the original Catholic foundations of USMC. Maybe that’s a stretch, but still.

USMC’s roots date back all the way to 1852, when the bishop of Toronto, Armand Comte de Charbonnel, invited the Congregation of St. Basil (sound familiar?) to open a Catholic school in the growing city. Charbonnel noticed a lack of university-level theological education for the Catholic population and invited his former teachers to fulfill that need. Establishing themselves in the basement of the bishop’s palace, it offered high school- and university-level education for its students.

In 1856, after a generous donation of land from John Elmsley’s estate, the Basilian Fathers moved their school to Clover Hill, where USMC still resides after nearly 170 years. Interestingly, due to the expansion of the student body, the high school portion of USMC had to separate from the main entourage. This founded the St. Michael’s College School, located at the intersection of Bathurst Street and St. Clair Avenue to this day.

In 1910, USMC became an official federated college of U of T. An agreement was reached where, due to recent limitations in government funding, St. Mike’s could still operate on a relatively autonomous basis. In turn, U of T was responsible for offerings in all other departments, as well as organizing exams. A similar process occurred for Victoria University and Trinity College, which had Methodist and Anglican backgrounds, respectively. If you were ever confused as to why there are multiple universities situated inside the greater university, look no further.

Nowadays we have only remnants from USMC’s devout past. Were it not for the name and the campus parish, some would probably be unaware of the significant religious and historical impacts USMC and its Basilian Fathers had in both the university and in the city itself. Still, as theology gave way to secularism, the statue of Saint Michael stands as a monument to the college’s previous accomplishments, and at the forefront of its future, even if it remains ill-defined and obscure.