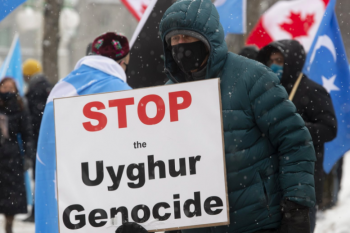 Taking a look into the international response to the Uyghur Genocide

Against all hopes, extreme human rights violations have yet to become a thing of the past. Since 2014, there have been active attempts by the Chinese government to repress, assimilate, and eradicate the Uyghur (Uighur) Muslim population in the autonomous Xinjiang, located in northwestern China. An ethnic minority native to the region, Uyghur Muslims have faced rising instances of discrimination, culminating in the detainment of approximately one million Uyghurs in internment camps. In the past decade, the implemented policies have been demonstrating the characteristics of a genocide while the international community fumbles to put together a response.

While Uyghur Muslims have historically faced discrimination, there is an alarming increase in proactive policies that have codified discrimination towards Uyghur Muslims into law in recent years. Since 2014, an increase in policies directed at infringing on the freedoms and basic human rights of these ethnic groups have been observed. This includes government sponsored monitors deployed to reside in Uyghur homes as well as the implementation of video surveillance. Since April 2017, internment camps have been operating and the Chinese authorities have detained up to a million Uyghurs and other Muslim minorities. While they have been framed as “reeducation camps,” detainees have been subjects to physical abuse, psychological torture, forced labour, sexual violence, forced sterilization, and other attempts at preventing Uyghur births. Furthermore, symbols and items associated with Islam are prohibited, which can be seen as an attempt to erase Uyghur culture. These atrocities have not been limited to detainees in the internment camps. The prevention of procreation within Uyghur women is common as an attempt to prevent the Uyghur population from growing.

Terms, employed to designate Uyghur populations, have presented them as dangers to society. The Chinese government has framed the Uyghur population as “backwards,” “untrustworthy,” and “terrorists.” They have presented the internment of Uyghurs as attempts to protect the Chinese population through the reeducation of the Muslim populations. The process of mass internment has also been described as “eradicating tumours,” according to a report published in early March 2021. As the situation worsens and more Uyghur Muslims are detained, the international communities, state and non-state actors alike, have slowly (the operative word here) started to address this situation.

The Convention on the Prevention and Punishment of the Crime of Genocide (Genocide Convention) was implemented in 1983, obligating the 152 signing members, including China, to prevent, punish, and not commit genocide. In accordance with this convention, a state is considered to have committed genocide if they are found to have violated any of the acts under Article II of the Genocide Convention. Xinjiang was found guilty of breaching all five, which are as follows:

Diverse reports have indicated mass deaths, mass incarceration in internment camps, physical and psychological torture, forced sterilization, family separation, and an attempt to erase Uyghur culture by the assimilation of Uyghur children into state-run schools. These actions are just a few of the many other attempts to squash the remnants of Uyghur culture. A genocide is characterized as the intent to destroy in whole or in part a population, which is precisely what the Chinese government is doing with the Uyghur population.

A recent example of a report, confirming the Uyghur genocide, was published by The Newslines Institute For Strategy and Policy in early March 2021. This report concludes that under the Genocide Convention, the Chinese government is in fact committing genocide and that the state bears full responsibility for it facilitation.  This report reaches a conclusion that the state is in control and has facilitated the gradual increase in repressive and violent policies, which is, in other words, a genocide.

The international response has essentially been quite underwhelming. According to the Genocide Convention, the international community has a responsibility not only to not commit genocide, but to prevent it. Despite this statement, the responses have been disappointing. While the Canadian House of Commons voted to recognize the Chinese treatment of the Uyghurs as a genocide on February 22 2021, Canadian Prime Minister Justin Trudeau, as well as the most part of his cabinet, abstained from the vote. Justin Trudeau’s reluctance to support the motion may come from concern for the mounting tension in Canadian and Chinese relations. Regardless, many people have claimed that Trudeau should be supporting this motion. The failure of the higher-level members of the administration to support this motion weakens Canada’s stance on the situation. Canada’s recognition of the genocide is delegitimized by the absence of Justin Trudeau’s support.

While the United States’ recognition of the genocide has been supported by both former President Donald Trump and current President Joseph Biden, it is arguable that this response represents too little and too late. In late January 2019, Secretary of State Michael Pompeo announced that the State Department recognized the genocide committed by the Chinese government. However, this recognition only came after years of mounting evidence and pleading from many platforms. The recognition of the Uyghur genocide simply took too long, even though the reports of satellite images that indicated the presence of internment camps were reported as early as 2018. They were the initial indications of eventual genocide. At that time, the Trump administration was in the middle of a major trade deal and reportedly did not impose further sanctions in response to the camps for fear of jeopardizing that deal with China. According to New York Times writers Edward Wong and Chris Buckley, delays over 2020-2021 in recognizing the Uyghur genocide can be attributed to the dismissal of these claims by Trump and his economic advisers. Around the time of Pompeo’s announcement, the Trump administration placed a ban on the importation of cotton and tomatoes for Xinjiang due to concerns of forced labour, which includes labour by Uyghurs and other minorities. However, that action had minimal impact on the economy of China, and was simply not enough.

The United Nations is essentially at a standstill, unable to reach any form of consensus due to the polarity that exists within the institution. While many countries, such as Germany and the United States, have vocally admonished the actions of the Chinese government, many countries, like Cuba and South Korea, have called for states to cease interfering. Cuba alluded to the fact that they supported China’s claim about those allegations of genocide being false. As numerous news agencies and intellectuals urge the United Nations to recognize the genocide for what it is as numerous Uyghur Muslims face increasingly hostile living conditions, political leaders squabble over the correct course of action.

If only we could argue that the treatment of the Uyghur population has only recently come to the attention of the international community, to account for its presently latent reaction. It would be comforting to think that governments and international organizations are just taking time to get their bearings and to decide how to react. However, this is not the case. The cries to address the rising evidence of human rights violations continue.

While mounting evidence indicates that there is in fact a severe human rights crisis occurring, international agencies have been ineffective at addressing these concerns.  Examining international response is honestly disheartening. It shows that the international community is unprepared in the face of severe cases of human rights violations, especially when it comes to such a superpower country like China. They fail taking a decisive action and seem to fear the term “genocide” more than they fear the actual ramifications of mass human rights violations.

When we look back on tragic historical events, we often ask ourselves how we could let it happen, how we could watch the most basic human rights of ethnic groups being completely disregarded. Yet, here we are as the Uyghur population in China is slowly being eradicated. The role of international actors here should be clear. It seems counterintuitive to sit idly by, disputing over the minute technicalities of particular convention or policy, while innumerable Uygurs and other Muslim groups are subject to physical and psychological atrocities. The international community has a lot of progress to do in their response to potential genocides. As history has indicated, policies and conventions mean nothing when they lack a comprehensive method of implementation. Let’s hope that this situation will force the international community to develop one and to do so quickly.