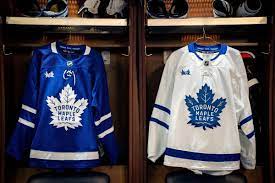 Drop the ball, spill the milk, lose the finals — whatever you want to call it, we hope it doesn’t happen this year

Look, I’m just going to come out and say it: I am a Leafs fan, and I’m not sorry about it. Like the rest of Leafs Nation, I’m crossing my fingers and praying that this year is our year. With newly acquired players and several lessons to be learned from last season, let’s take a look at what’s in store for the team this season.

On September 20th, the team acquired sponsorship with the Dairy Farmers of Ontario, leaving a “Milk” patch on the front of their jerseys. Fans aren’t exactly excited about this new design, but if it makes for a good campaign, I’ll let it happen. Think of all the commercials we’re going to see telling us that milk makes strong bones and helps the team in between periods. Regardless, I’m lactose intolerant and don’t believe that milk is the answer for a win this season (or any season).

Twitter is also having a great time with this news. Breakfast Television host and former co-host of Tim and Friends Sid Sexeiro posted the following comment about the sponsorship: “The Leafs new ‘Milk’ sponsorship is going to look hilarious on the nights they only give 2% effort.” Sexiero’s comment about the new jersey design is undoubtedly a great joke, but I can’t help but wonder what this means for the Leafs this season.

Twitter has a habit of absolutely slandering the team. The Leafs haven’t won a Cup since 1967, and soon, the team’s name won’t even be on it. The Leafs need a win within the next five years to keep their name on the Cup, but when will they make it happen?

Taking a look at this year’s team, the Leafs have acquired Matt Murray from the Ottawa Senators in net. Murray has won back-to-back Stanley Cups with the Pittsburgh Penguins in 2016 and 2017, but it’s not enough to make him a consistent player. Stats aside, Leafs GM Kyle Dubas is confident in this pick. Dubas managed Murray back in the Ontario Hockey League (OHL), so he’s familiar with the way Murray plays and knows he’s a strong goaltender. Hopefully Dubas’ faith is enough to make fans believe that Murray was worth the trade. I’m willing to believe it for now, but let me watch the first few games and see how he works with the team.

Let’s also address the bear in the arena, or the elephant in the room; whatever analogy you want to use, we have to talk about the Leafs’ beloved Auston Matthews. There’s no doubt that Matthews is a star on the ice. He cracked the 50-goal mark last season in only 6 seasons with the team. He’s one of the Leafs’ go-to guys, and there’s no doubt he’ll woo us again this season.

But I’m particularly excited for what I like to call the Bunting-Matthews-Marner trifecta, #58, #34, and #16, respectively. Bunting signed with the Leafs back in 2021 and has great chemistry both on and off the ice with #16 and #34. He averaged 63 points in 2021 with the team, and I think he’s guaranteed to beat that this season. Left winger Alex Kerfoot (#15) is also a notable player. Last season, when Bunting was off the ice due to a knee injury, Kerfoot took his place. Kerfoot is a flexible guy who fits well in multiple line combinations, and it’s definitely an advantage to have him on our side. Hopefully this also leads to more playing time for #15 this season.

While the Leafs finished second in the Atlantic Division last season with a franchise-best of 115 points in the season, it’s not enough to guarantee them a spot in the playoffs this season. The Leafs better maintain a consistent record this season in order for me to make better predictions, and for them to have a shot at winning. I have no idea how they’ll surprise us this year, but what I do know is the team is going to need a lot more than a new look and the iconic 16 & 34 duo to get them through this season.