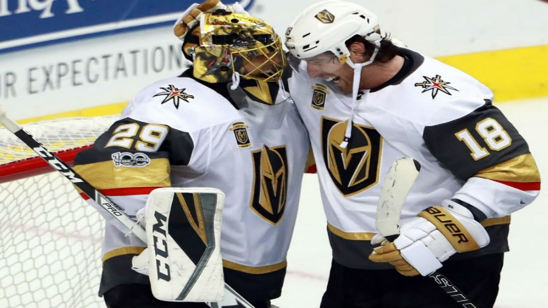 You could compare the start of the Vegas Golden Knights’ season to a guy who has won all evening at the poker table, then loses everything in a few rounds, only to find himself digging his own grave in the desert with the mafia behind him.

The Golden Knights’ luck has surely run out for the time being with the goalie fiasco they are currently facing. The Knights started the season off with goaltender Marc-Andre Fleury, who quickly received a knee to the head and is now out with a concussion. Their backup, Malcolm Subban, received a lower body injury while attempting to make a save against the Blue Jackets and is also currently out. Then their third string goalie, AHL call-up, Oscar Dansk was next in line, but seemingly slipped on an invisible banana peel in his crease, fell, and received a lower body injury as well.

With 3 goalies on injured reserve, Vegas called up Maxime Lagace who was in net against the Leafs Monday night, and of course was clipped in his crease by the Leaf’s Zach Hyman in the second period. Fortunately, Lagace was able to shake it off, and prevent another goalie change. This time it would have been 19-year-old Dylan Ferguson, the emergency call up, who currently plays for the WHL’s Kamloops Blazers, and doesn’t even have an image pop up on the Vegas roster page.

Despite the goal-tending issues this team is facing, they are doing well for a brand-new organization. Vegas boasts 9 wins, 4 losses, and currently sit in second place in the Pacific division, trailing the Los Angeles Kings by 2 points. Players such as James Neal, Reilly Smith, and David Perron have led to the team’s success, leading the team in points and goals. Neal was acquired from Nashville, Smith from Florida, and Perron from St. Louis. These players were snapped up as a result of the Expansion Draft, which allowed them to select 30 players, one from each NHL team. Teams that wanted to protect their players were allowed the following choices a) to choose 7 forwards, 3 defensemen, and 1 goalie, or b) 8 skaters (forward/defenseman) and 1 goalie. There were additional rules such as “no movement” clauses that were protected and all first and second year professionals and unsigned draft choices were exempt.

Although, even with the favorable options that the expansion draft provides, sports sites such as The Hockey News had predictions before the start of the season that the Knights would be “one of the worst teams of the modern era this year”. Clearly Vegas is surpassing that expectation and are continuing to play with high intensity despite the setbacks they continue to face. Counting a team out before they even begin to play is not necessarily wise as they were able to obtain a lot of talented players when assembling the team.

It will be very interesting to see how much further the Knights progress once their starting and backup goalies Fleury and Subban return to the ice. If they continue to have a strong offensive game and regain their star goalies the Knights will be sure to gain more wins and become a competitive challenger for the other seasoned teams in the NHL.