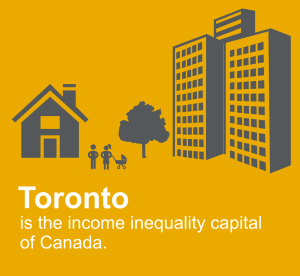 Toronto is now the “Income Inequality Capital” of Canada according to recent U of T, United Way report

The University of Toronto (U of T) and the United Way have recently collaborated on a report entitled “The Opportunity Equation in the Greater Toronto Area,” which declared Toronto the city with the greatest in- come inequality in Canada — essentially, there are less and less average income neighbourhoods, leading to some pockets becoming highly gentrified and rich, while others become progressively more destitute.

This report was based on data from a 2016 census, and while it states that many cities in Canada suffer from large income divides, Toronto remains the worst o ender. In 1980, Toronto was teeming with middle-in- come neighbourhoods; since then an enormous shift has occurred, altering Toronto’s economic fabric, and polarizing neighbourhoods into becoming either wealthy or poor.

Why does all of this matter? The Mike asked one of the people who worked on the report, Michelynn Laflèche, United Way Toronto and York Region’s Vice President of Strategy, Research, and Policy, exactly what the implication of Toronto being the “income inequality capital of Canada” means.

“There’s lots of research out there, from all over the world now,” Laflèche asserted, “telling us that in more unequal societies where income inequality is higher, you have lower levels of trust, educational performance, life expectancy, you get higher rates of teen pregnancy, violence, imprisonment, mental illness, addiction, obesity, those sorts of things. You have unstable and unsustainable economies — the list is long — higher rates of bankruptcy and financial distress among individuals, increasing pessimism, and then one that really weighs on my mind is this kind of sense of the decreasing concern or connection between people from different backgrounds.”

As for why this is happening, there is no easy answer, as according to Laflèche, there are a variety of nuanced reasons for this occurrence. Among other things, she says, “It has to do with the economy … It has to do with technological and global change — globalization, rather — so the way in which jobs are changing, some types of jobs are disappearing, and other types of jobs are appearing new on the horizon and we don’t know what those look like, but it means that some people are losing work as a result. Back to the economy a bit, it has to do with the decline of certain sectors — particularly in our region the decline of manufacturing sector has a big impact on this, and its replacement by a service sector which has lower wages overall.”

Laflèche also wants to be clear that while immigrants may contribute to the problem, the issue is much more complicated than what many believe to be the case. “There’s a correlation of course with a high-level immigration and income inequality, and I want to be clear that it’s not because immigrants themselves come with less skills, and therefore don’t earn as much — it’s be- cause they are entering into a workforce that they’re actually having trouble entering into. So, they experience, and they report experiencing, discrimination in getting jobs, in maintaining their jobs, and progressing in their jobs.”

“One, build awareness about it. That’s got to be of course your primary role. You’re in that stage of your development that this is the kind of work you can do around helping people understand the issues that are on the ground and affecting our community …. You can also begin to start thinking about how you can enact change in different spaces. So … a lot of young people these days are very entrepreneurial and setting up their own businesses, even while at university … And I would say … from the very beginning, be thinking very carefully about what you’re doing as you enter the business world yourself, or enter a world where you have an opportunity to earn money for yourself and potentially employ or engage others in the production of those about money for yourselves … Think about what should be the difference between what you take out of that business and what you give to those that helped you achieve your business goals and success, and do that from the outset. Commit to it for the long term.”

“And think,” Lafléche continued, “university students can also be looking at their own space in campus, looking at — again the labour market becomes a very important piece around that, certainly the student union can have a role to play, continue to have a role to play ensuring that the jobs that for students and others on the campus … I think this is really important, to be thinking about the whole work force, and not just one’s own members. How do we ensure that the jobs are quality jobs? How do we ensure that people get enough hours to earn the right income they need to live? What are the ways that the student union can work with the broader labour force within the academic setting? I think things like that are all actual things that … would be helpful in the community, a university community.”