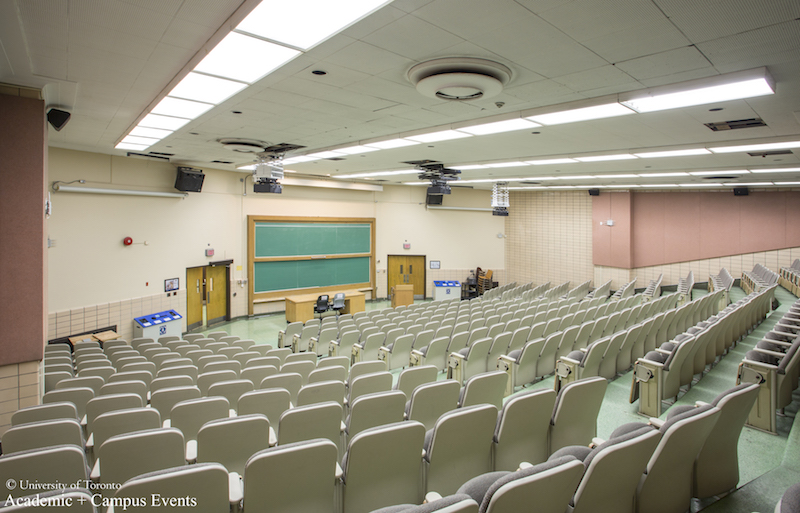 Photo: MC 102, where the AGM took place (U of T Services and Campus Events).

The meeting was attended by around 90 students who held a total of 335 proxy votes. However, there were concerns over its availability to University of Toronto Mississauga (UTM) students as the proxy period (October 9–15) was during UTM fall reading week (October 10–13).

UTSU President Mathias Memmel opened the meeting with his Presidential Address, which he described as an “unusual speech for an unusual year.” During this speech, Memmel discussed the topic of unity within UTSU, stating that while “unity is often code for uniformity, [they] see the need for unity used to justify the suppression of dissent.” The basis for this speech was the numerous past issues of corruption and unrest within the UTSU executive board. He continued his speech by stating that solidarity is earned, not owed, and UTSU has not yet earned its solidarity.

After his speech the door opened up for questions from attendants of the AGM, the first of which dealt with the termination of three major positions. The attendant revealed a petition with 1,200 signatures pressing UTSU to revitalize the positions of Health and Dental Services Coordinator, Clubs Coordinator, and Financial Coordinator. The attendant asked what UTSU is doing to address the concerns that the petition raises and how UTSU is addressing the resulting cuts to services by the eliminations of these positions. Memmel responded stating, “I appreciate the fact that signatures have been collected, but I’ll also note that from what I’ve seen, that the majority of these signatures are not from UTSU members, so I’m happy to receive the petition but as far as we [UTSU] are concerned at this point, there’s no opportunity for reconsideration at this time.”

At first, this response seemed to dismiss the topic, but then another student voiced their opinion shortly after, asking about the services, rather than the positions themselves. The student stated that the 1,200 signatures represent the students’ concerns about the services that are being cut as a result of the termination of these positions and that the UTSU is continually ignoring students who are taking action to vocalize the need for these services. Memmel responded that he cannot discuss the topic, right before stating that, “We [the UTSU] have the option [to bring these positions back], we are choosing not to.” He explained that the service cuts are a result of the $3 million deficit UTSU will be facing over the next 10 years as a result of the new Student Commons project.

The bulk of the AGM was dedicated to three bylaw amendments. Only one of these bylaw charges, Bylaw XIX, was originally set by the agenda to be debated at the meeting. This bylaw concerns UTSU’s autonomy from external groups. Adding this bylaw would disallow the UTSU from becoming “a member of any organization from which the UTSU would not be able to withdraw via a vote of the Board of Directors” and from making agreements that could not be terminated by a vote from the Board of Directors.

Memmel used the Canadian Federation of Students (CFS) as an example of an external organization that this bylaw would prevent the UTSU from forming any such binding agreement resembling those that they have in the past.

Debate on this topic was shortened because of time restraints, and much of the period was dedicated to asking questions about the specifics of the bylaw. The motion carried without amendment.

“The UTSU is facing a three million dollar deficit with the introduction of the Student Commons in the next 10 years,” Memmel said. “The numbers speak for themselves — they’re provided by the university, [and] they’re not fabricated.”

The Student Commons Project Memmel refers to is the plan to turn 230 College Street into a student centre for U of T’s St. George (UTSG) campus. The UTSU Financial Projections and Analysis for 2017–27 estimates that the costs of the Student Commons will be higher than the revenue raised to fund the project. The document states, “The costs of operating the Student Commons, which the UTSU appears to be bound to pay to the University, is projected by the University itself to exceed the expected revenue from the Operating Cost Levy.” Memmel argues in this document that because of students’ refusal to raise the levy, it is necessary to downsize and make budget cuts in order to “keep the lights on.”