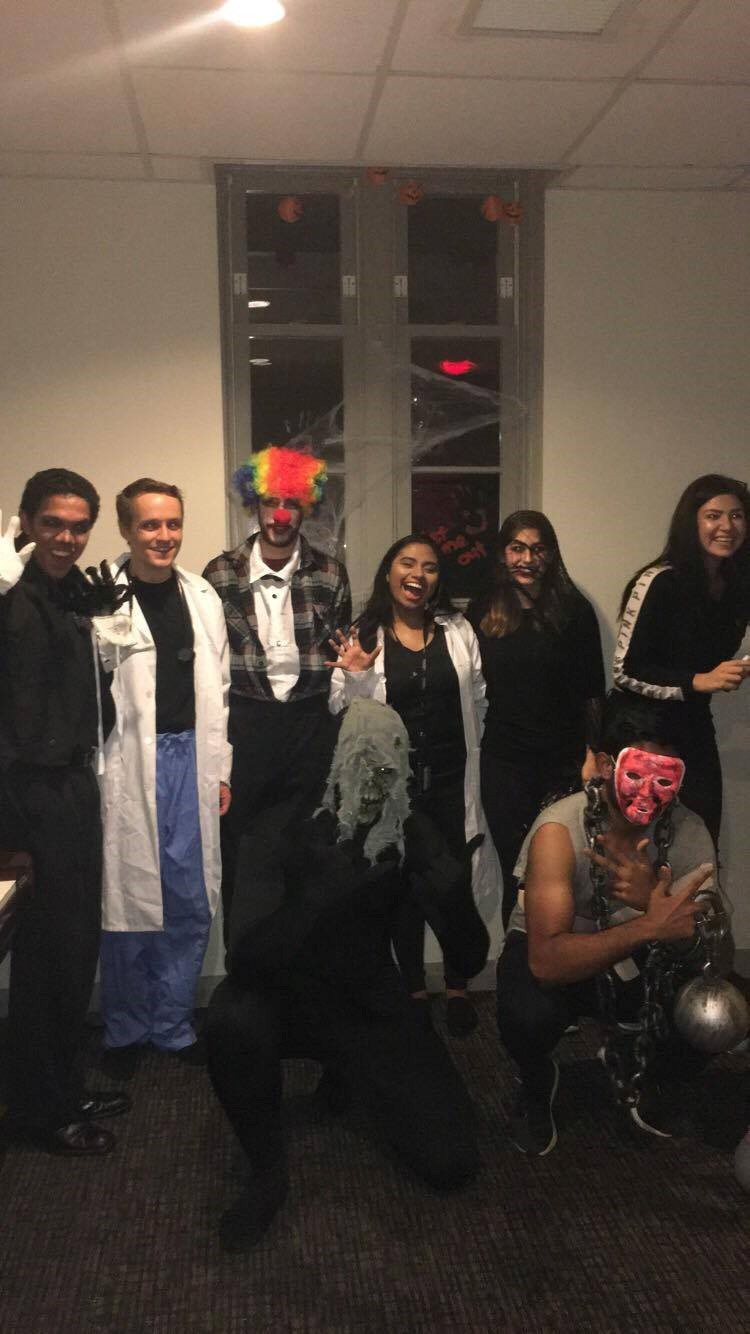 Sorbara Residence became a bit unlivable for an evening, as Lower Level was transformed into a scary haunted house

It’s that time of year again when you end up seeing skeletons outside of your biology class and hear the Ghostbusters theme somewhere in the distance. I had thought this time around, amongst the festivities, I wouldn’t encounter anything scarier than my midterm marks. However, I was gravely mistaken. St. Michael’s College’s very own Sorbara Residence put on a house of horrors that wasn’t for the faint of heart. It ran from 7 to 9 p.m. on Sorbara Lower Level, put together by some friendly spirited students.

I had the pleasure of working behind the scenes, and working alongside a wicked team to bring this event together. The psychiatric facility-themed adventure could give American Horror Story: Asylum a run for its money. There was a ton of chaos that was to be witnessed later that night, but fortunately, setting up for the show was exempt from the madness. Set-up crew members included Elizabeth Shaha, Christian Silva, Jeremy Hernandez-Lum Tong, Nick Fleming, Sebastian Bonham-Carter, Amira Alex Abdalla, and Julia Passeraelli. There were scary costume transformations to be made, and fake cobwebs to be hung. The haunted house also included detours in a bloodcurdling bathroom, a frightening laundry room, and a grand finale piano display by one of the patients. Crew members worked in an eerily efficient manner to transform Lower Level into a scene from your nightmares. Dividers were hung, splitting the hallway into two. Guests were to walk on the left side of the dividers, take a U-turn, and exit through the right. Blood (fake blood, of course) was splattered on bathroom mirrors, and bloody handprints were taped onto the laundry room walls. The hallway was dimly lit by an intense crimson hue. A well accompanied soundtrack was nothing short of unnerving, as sinister music echoed through the halls in attempts to drown out the screams of the attendees. Actors included Yash Shah, Julia Passeraelli, Enyi Anudu, Daanish Shah, Elizabeth Shaha, Jeremy Hernandez-Lum Tong, Christian Silva, Sebastian Bonham-Carter, Nick Fleming, and Ian Cappellini. They were dressed quite sharp for the occasion, with disheveled wigs and costumes making them look like picture-perfect ghouls. A few looks included Yash, who could have been seen wearing a hand-painted red mask. If you were brave enough to approach him, you just might have asked if his tattered, bloody shirt was actually Yeezy Season 5. Ian had spent a lot of time in the makeup chair because obviously we wanted to make sure his contour was properly blended. His face makeup ended up being a terrifying work of art. Julia, who rocked an intricately demonic costume, looked frighteningly flawless.

After the set had been completed, it was time for the actors to take their places. Our first performances started around 7 p.m. Guests were given a tour of the institution in groups. A few attractions included the unfortunate instance in which you turned a wrong corner. If that were the case, you would have bumped into Ian, dressed in a killer clown costume, which in contrast made Pennywise appear friendly. When the terrifying tour guides brought you into the laundry room, you would have walked into a scary scene of Julia in character, weeping over her lost child. If you weren’t paying attention, you would have gotten a serious scare from Yash, who was cleverly hidden in the dark, making a dramatic entrance, while the guests struggled to run out the exit. We had Jeremy playing a scary symphony on the piano, accompanied with a Joker-esque laugh that would have made the late Heath Ledger proud. As Jeremy begged the attendees to stay with him because he was lonely, we had Enyi or Daanish hiding amongst the dividers, looking to scare their next victims. I had the opportunity to walk through the haunted house myself, and the crew involved really went out of their way to make sure you left their facility a little shaken up.

The haunted house organized by Sorbara was an exhilarating event to have checked out. The involved individuals who helped make this come together did a fantastic job at tugging at your deepest fears. The thrills were quite a treat!