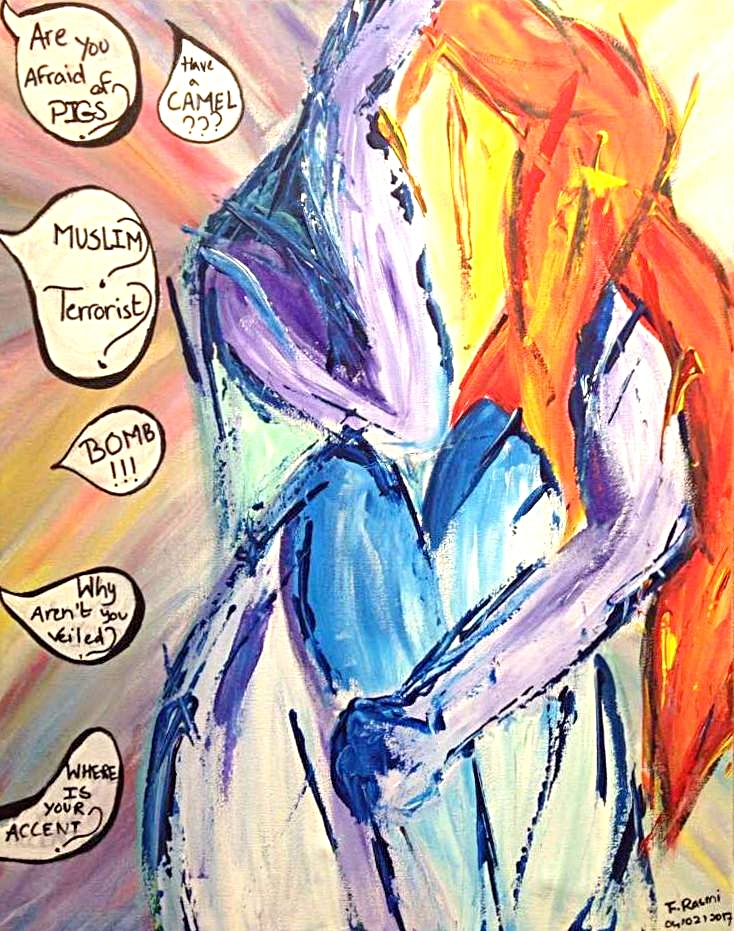 He was shocked; he was genuinely shocked that someone like me existed. At a Model United Nations in Paris, over lunch, I fast became the subject of discussion as a group of teenagers from across the world learned of and about my background. They were bewildered by my existence; most of them had never even seen someone from my country before. All of them had heard about Egypt in the news — after all, it was 2011: the year of the revolution. They were shocked and they wanted to hear everything.

As I sat there explaining what it means to be both Egyptian and Muslim, I was amazed at how “new” I was to them. Most hear “Egypt” and either think, “It’s all chaos and vulgarity and stuff”— a real statement by someone I once spoke with — or think of Pyramids, Cleopatra, and, well… camels.

That day, one of them asked me if he could take me to his school so as to finally show his friends that there is, indeed, a difference between a Muslim, and an Islamist. Mind you, that was six years ago, when people didn’t look at you and think “potential terrorist” right away.

I was 16 and barely aware of what it really meant to be a Muslim in this world; I wasn’t even sure what it meant to be a Muslim religiously — after all, I was born into it. What I did learn about Islam that day however, was that it is a label. As soon as the group found out, it became a label, a label stapled on my forehead, as obvious as my brown hair and olive skin.

In fact, we all give ourselves and others labels, and we do it without even knowing it. We access the world that way, by giving things names and descriptions. We title everything around us because once we name it, it becomes real and concrete in our heads, and, you know what? That’s okay.

Worse, is when a label is used to advance an agenda that will leave a trail of casualties in its aftermath. Today, people are being killed all over the world regardless of their background, skin colour, religious beliefs or sexual orientation, because of misguided political agendas.

On this side of the world, we are now witnessing, firsthand, the sobering reality of this fact. Today, we’re not just reading about it in history books — we’re living it, because it never truly left. The bigotry, the hate, and the labelling. It’s all very, very real and now we, the “youths,” are the unfortunate souls that must confront it.

We all carry the burdens of those before us and of the stereotypes that surround our communities: from the sheer ignorance of many to the simple, ill-fated fact that we were born in an era where everything moves so fast that there seems to be no time to take a break, to stop and think.

While others like myself have gone through this sort of awakening a long time ago, many are only figuring it out now: or at least, are now letting themselves realize it. The impenetrable bubble has burst, and the cruelties of the world are becoming more palpable, affecting everyone at once.

As a History student, I’m always amazed at how little humans learn from their past. At how gullible the masses can be. At how different perspectives on an issue can result in so much bloodshed that people forget what they were even fighting about in the first place. One charismatic leader can ignite a fire from a tiny flame of ignorance, resulting in mass destruction. Labels are used as matches, they’re thrown all over the place to give people something to be angry about, a scapegoat.

We are all our own people. Yet, we fade into the shadows of those who are deemed from our same group or community. It is easier to blame and hate the person in front of us than to have no control over the general and ambiguous idea of who or what we should be angry at.

There is a lot of evil in this world. Blaming it all on a single group of people doesn’t solve it, but being aware of the problem and fighting it together might. Portraying Islam and those who identify as Muslims as the sources of all evil doesn’t solve our problem — it amplifies it.

The Middle East is often portrayed as a centre of chaos in which third-world leaders have no control over their uneducated populations. It is blamed for most of today’s problems. In reality, more people have died there than in almost any other place in the world. There have been more Muslim victims in this supposed, seemingly endless War on Terror than many would like to believe.

Ultimately, why does it matter what faith they belonged to? They were people.

In Kindergarten, we are taught to use our words instead of our physicality to fix our problems. We are taught that words matter and that we should choose them carefully to express ourselves. Now, we seem to have forgotten that lesson.

The media labels the people who die in the attacks by faith and nationality: “6 Muslims”; “15 Frenchmen”; “100 Syrians.” So, they become, and we accept them as statistics, forgetting that behind each label lies a multitude of people — people who had lives, with families and stories: people who loved and were loved.

The result is that now, students are being stopped from completing their degrees because they have the wrong passport. Others are being assaulted and killed because they believe in the wrong God. People are dying, and instead of uniting against the real cause of the attacks, we’re blaming a group of helpless people, as a collective, for those attacks. Even worse, we’re justifying why they were or should be attacked and killed.

This world is a big place, and we’re always in such a rush that we don’t even notice when we’re making the most absurd assumptions, regardless of their consequences. The result? Many people are given labels that could potentially justify their death: “You’re native? Do you have a tipi?”; “You’re from Pakistan, but you don’t have an accent?”; “You’re Muslim, so are you afraid of pigs?”; “You’re white, you must be a racist.”

I look around me and find confused, angry, and heartbroken for people from all walks of life. Taken aback by the onslaught of assumptions, labels, generalizations, and hatred, my friends are sad and I cannot console them, because, what could I say that would? We’re frustrated, we’re lost, and feel absolutely helpless. But we’re not. I assure you, that we are NOT helpless.

By thinking we are, we allow the little, but loud, minority to win. If we become even half as loud as they are in our resistance to the heartless and inhumane process of labelling and destruction, we will win.

The group of teenagers I sat with that day at the Model UN in 2011 were not to blame for not knowing more about my country or religion. In fact, I applaud them for opening their minds and listening. We are raised to think a certain way, and it is up to us to doubt and challenge each and every one of our beliefs in order to ensure that we actually believe in them. We have a duty to challenge ourselves, read more, listen, evaluate, and only then, decide on where we stand. Until then, we should resist: we should oppose the loud and silencing voices, the attacks, the ignorance, and the hatred. Defy the assumptions and resist the labels.

If you look at me and you don’t know me, you won’t see my country and you won’t see my religion. You’ll see a non-distinctive skin color that will show you nothing, other than the fact that I probably don’t belong to your race. I’ve been told I’m fortunate to have what people call “international features.” That fortune, however, has never helped me un-see the occasionally subtle, yet mostly obvious change in expression, when I say where I’m from. What I eventually realized however, is that I’m glad I’m colorful, I’m glad I’m different, because my difference allows me to learn, understand, and accept others for who they are. My difference taught me to make a conscious effort, every single day, to look beyond labels.

I am human, I am loud, and I will resist.

And so can you.