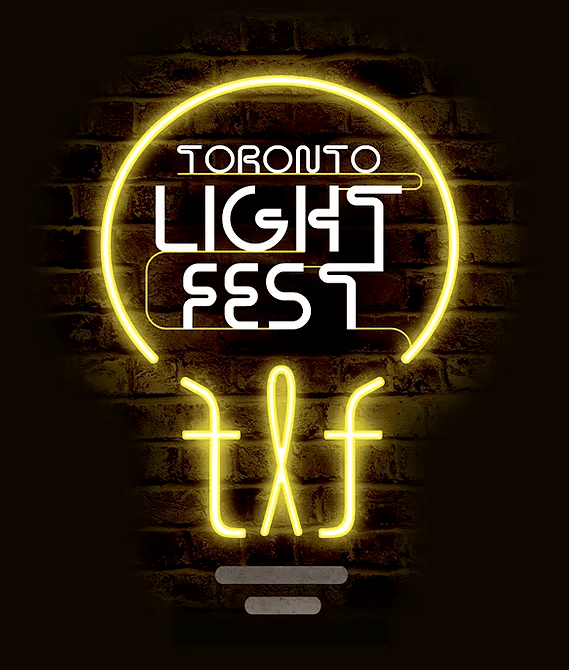 A review of the Toronto Light Festival

The inviting glow of neon green and pink invites the viewer into the first annual Toronto Light Festival in the Distillery District, which is here until March 12, 2017. The overall theme of the festival surrounds the ways in which the disruption of darkness is undertaken on a global scale, as represented by the array of both local and international artists featured at the festival from places such as Italy, The Netherlands, and Israel. Winter is long and dreary, and feelings of isolation often become particularly poignant during this time. If the overall theme is the global experience of darkness, then the overall tone of the festival, which features exhibits such as “Bands of Friendship,” “The Uniting Lightstar,” and “Our House,” suggest that the way to disrupt darkness is through the communal experience of art.

One of the set pieces of the festival is“Social Sparkles” by Studio Toer from the Netherlands, which incorporates the social aspect of disrupting darkness in its very conception. Designed to be reminiscent of an outdoor garden party, the project is a network of lights hung above passersby that light up by the movement of the viewers below. What results is a series of lights converging and colliding as people move throughout the festival. The kinetic work of artists Wouter Widdershoven and Castor Bours from the Netherlands began in 2007 with the founding of Studio Toer. Their aim is to explore the boundaries between the viewer and the art, a goal which “Social Sparkles” exceeds. The interactive exhibit connects together strangers underneath a literal canopy of lights that light up with every movement, thus creating a shared experience for those passing by.

One of the largest pieces at the festival is “Digital Origami Tigers” by LAVA, and this piece instills in the viewer an intense respect for the craftsmanship in such large scale sculptures. Created in 2010 in order to celebrate the Chinese New Year at Customs House in Sydney, Australia, “Digital Origami Tigers” has since been adopted by the WWF (World Wildlife Fund) in order to bring attention to its international campaign to save endangered tigers. The bright and angular crouching tigers combine together ancient methods of lantern-making with digital design and fabrication technology, thus bringing together East and West, old and new. The piece is difficult to miss as the tigers’ large size and bright orange colour draw attention: they are one of the brightest exhibits at the festival.

One of the exhibits that emphasizes unity and the collective experience of the festival is “My Light is Your Light” by Alaa Minawi from Lebanon. This piece features six life-sized figures of humans made of curved white-light neon tubes bent forward as though they were trudging towards some far-away goal. The figures are refugees, and the piece evokes hardship and a desperate hope for something better than what is currently available, which is reminiscent of the artist’s own story as Minawi is a Palestinian refugee living in Lebanon. The shapes are fragile and there appears to be nothing more than their outline, a physical representation of what Minawi says refugees are inside, because of their hardships: hollow.

The Toronto Light Festival is an event that should not be missed. The global selection of artists coupled with the goal of bringing light to the dark winter months makes for a night of inspiring exhibits that push aside seasonal apathy and avoidance of frosty evenings. Admission is free, and the hours are dusk until 10pm Sunday–Wednesday and dusk until 11pm Thursday–Saturday.