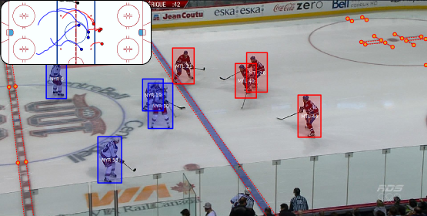 If you’ve talked to someone who watches NHL hockey recently, you may have heard phrases like ‘the rise of analytics’ or ‘the demise of the enforcer.’  At first, these may seem like unrelated concepts with little impact on each other, but in fact, the rise of one is directly linked to the demise of the other.

The demise of the enforcer role in hockey is a fascinating twist in a game in which, at one point, violence was commonplace.  This is best illustrated by the fact that during the seventies, one of the most dominant teams in the NHL was collectively known as ‘the Broad Street Bullies’ because of their physical style of play.  So, what has led to this perhaps surprising shift which has moved the game away from players who contribute by being an enforcer towards only having players who contribute through skill?

One answer to the question is analytics, but what is analytics? If you’ve ever heard of Moneyball, the story of the Oakland A’s baseball team that managed to be one of the most competitive teams in the MLB despite having the lowest pay role in baseball, you’ll know that they accomplished this feat by applying player statistics to player decisions. The ‘moneyball’ method was then widely adopted throughout the MLB.  Hockey analytics is basically the same concept but applied to hockey.

Shooting statistics are mainly used to measure the puck possession of a given player: how often the player has the puck and what they do with the puck when they have it.

Shooting percentages provide a means of comparing players without getting into the more finite details associated with shooting statistics.

The final statistic focused on in analytics is scoring statistics.  This category deals with how much a player is scoring compared to how much they are shooting.

Now that there is an understanding of what analytics are, why have analytics led to the presumed demise of the enforcer?  It isn’t hard to see how the statistics used in analytics are in no way reflective of the game style of an enforcer.  There is no mention of number of fights, penalty minutes or how often a player sticks up for their team mates.  It is ultimately the lack of consideration of these attributes in analytics which has led to the reduced role of enforcers throughout the NHL.

However, analytics are not the only changing aspect of hockey which leads to the ever-fading role of the beloved enforcer.  The increasingly talented pool of NHL players has led to less room on a roster for someone to just go out, fight and take penalties.  At the end of the day it is scoring, not fighting, that wins hockey games.