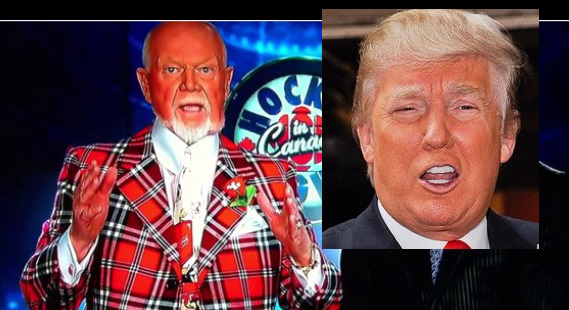 Cherry in the Age of Trump

Has the world moved past your 82-year-old grandfather? You still love him, but maybe you shouldn’t be enabling his outdated views. Maybe they are his racial prejudices, his general xenophobia, or even his opinion that hockey is still a game in which someone’s head deserves to be smashed into the boards. I suppose that by now, my hypothetical grandpa’s has become obvious, but in case it hasn’t, it is none other than Hockey Night in Canada’s resident curmudgeon — Grapes.

This is hard, because I grew up watching Don Cherry.  Hockey has been a major part of my life. My dad has worked at the same rink for almost 30 years, and I was in skates as soon as I could stand. Every Saturday night, the Leafs were on our TV: during the legendary Pat Quinn’s time at the helm, when they played late into those beautiful spring nights. Groups of dads would gather around a neighbourhood TV and there would be a reverential hush during the first intermission when Cherry stepped to the pulpit. But we are living in a different world now, and there’s a different Don around giving it a bad name.

Cherry isn’t perfect, and some parallels between him and Trump are apparent. Both are xenophobes — Cherry takes every possible opportunity to complain about European-style hockey, which he views as creeping into the “traditional,” North American way. According to Cherry, the faster, more skill-based game threatens the down-in-the-corners game, where goons beat up other goons to protect superstars like Gretzky from being smashed into a pulp. It’s like Donald says: “If they want to play that European game, they should have stayed in Europe!” Wait a second, wrong Donald.

Look, I don’t want to disparage the Cherry name by comparing him too closely to Trump, but the parallels are there — the old white man rhetoric, the appeal to a working-class base, and the loud, boisterous charisma. For what it’s worth, Don Cherry still holds that special place in my heart, and he draws me in no matter what he is saying. Whenever he is on the TV, I hit pause on the music and turn up the TV volume.

Let’s push further though, beyond my nostalgia, and consider whether there’s a place for the Don Cherry’s of the media world anymore.  I can’t help but think about his love of his country and the troops.  Cherry’s love for his country isn’t as blind or nationalistic as Trump’s. Cherry has a genuine and emotional response to his country. At the end of every Coach’s Corner, Cherry acknowledges a soldier who passed away that week, and every week he does so with a lump in his throat as he fights back tears. It’s a raw, human moment that is alien to Trump. It shows how a would-be hard-shelled hockey guy can still wear their heart on their sleeves and show emotions.

It is weird to consider that the government pays for Cherry to be on air, especially given his occasional anti-French rhetoric. But then again, it is even stranger that the downtrodden of the United States would elect a billionaire, reality TV star, demagogue as its next president, so who is to say? In lieu of that, let’s take Cherry as he is, as Canada’s Old Man Hockey. He won’t be around forever — thankfully, neither will Trump.