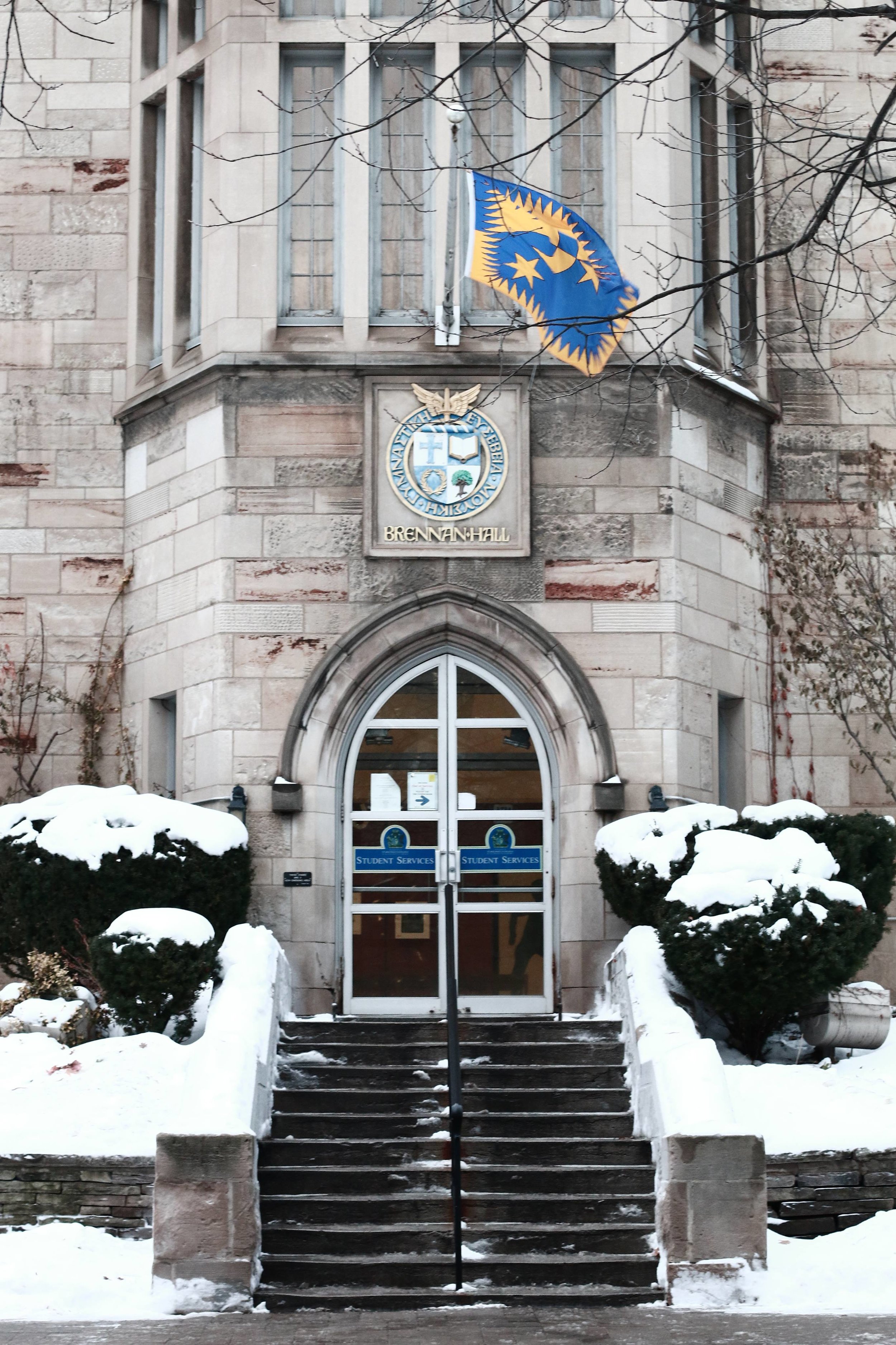 On Thursday January 11, the University of St. Michael’s College (USMC) held a town hall in The Coop to discuss the upcoming renovations to Brennan Hall. The town hall was moderated by USMC Principal and Vice-President Randy Boyagoda, and saw representatives from the architectural firm Gow Hastings as well as a USMC student panel.

Renovations to Brennan Hall have been in the planning period since fall 2017, and physical renovations will begin on January 22. The purpose of the renovations are to create a more student-friendly space within Brennan, as well as to move the registrar’s office in an effort counteract overcrowding and revitalize Brennan Hall.

With phase one of the project, after construction begins, access to Brennan Hall will be limited. This applies in particular to the Brennan Lounge.

However, the college is working towards ensuring that the resources of Brennan will still be available. This includes the St. Michael’s College Student Union (SMCSU) office relocating to Brennan Hall 102, The Coop being reserved as a student-only space until the end of classes on April 5, and the continuation of a fully functional Canada Room for students living on residence. Students will be asked to access the Canada Room via the Brennan Hall South Entrance.

The town hall began with an introduction by Boyagoda, who outlined why renovations to Brennan are necessary, as well as what these renovations might look like.

“St Mike’s is investing in this renewal of Brennan Hall for a number of reasons,” Boyagoda said, “primarily I think to modernize student facilities and services to make it easier for students to access the services that you need and to improve upon our services to better meet your needs.”

Along with moving the registrar’s office to better adapt to the volume of student traffic, plans also include revamped spaces for student organization and club offices, improved lounge areas, and increasing the amount of natural light in the building.

Response to this project has been primarily positive. However, some students remain unsure as to whether substituting The Coop for Brennan Lounge will provide sufficient enough accommodation to them during phase one of the process.

Approximately 50 USMC students and staff were in attendance at the town hall.

At the town hall, the student panel led by SMCSU President Samantha Douek, Commuter Don Angelo Serrentino, and Editor-in-Chief of The Mike Josh Scott spoke about their own experiences with the registrar as well as their hopes for the project.

After describing having to wait hours to access registrarial services, Douek described why moving the registrar’s office to Brennan would benefit students.

Gow Hastings, the architects of the Ryerson University StudentHub, will be tasked with the project of renovating Brennan Hall. Gow Hastings works almost exclusively on college and university projects. Along with the Ryerson StudentHub, they have also worked on the OISE Office of the Registrar, the Bahen Centre, and the Green Beet Cafe located in Gerstein Library.

According to Gow Hastings, the renovations outside the creation of the new Registrar’s Office will mainly be cosmetic, and will concern such items as lighting and furniture.

The exact cost of the project is still unknown as the final budget will depend on the extent of the full renovations. The renovations will be funded through two main sources.

“The renovation and renewal of Brennan Hall is expected to be funded through a fundraising campaign, which is already attracting generous donations from St. Mike’s alumni and friends,” Stefan Slovak, Director of Communications, Events and Outreach, said. The second source will be, “through a fund, designated to support capital projects and approved for this purpose by the Collegium (the governing board of USMC) in December 2017.”

Both USMC and Gow Hastings have emphasized how vital they consider student feedback to the renovations process. Along with the town hall which featured both a student panel and an open questions period, the college recently sent out a survey. The survey asks about students’ current use of Brennan as well as what they would like to see after renovations. (Students can access this survey before January 23 via this link.)

While at this point, it is difficult to tell what exactly the new Brennan Hall will look like, USMC hopes that it will become a brighter, warmer, more welcoming hub of St. Mike’s student activity.

EDITOR’S NOTE: A previous version of this article stated that the project would be funded by the President’s Fund for Excellence, which was incorrect.