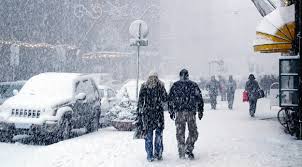 Fear, excitement, curiosity, sadness, happiness, homesickness, and more fear. That pretty much sums up what it felt like to be an international student embarking on winter break in Canada, for the first time, alone, 11,000 kilometres away from home. A lot of people asked me why I chose not to go back over the break. Well, other than the fact that home is the city of Abu Dhabi, in the United Arab Emirates, making it an 18-hour, $2300 CAD flight, my last exam beautifully landed on the 20th of December, making a trip back home almost useless. So, I had to spend my break here. To say I was scared is an understatement at best. Not only was I alone, but I was also about to experience snow/winter for the first time. In my life. Ever. Exciting, right?

Thankfully, I have a couple of distant relatives scattered around the GTA, so that made it a little easier. But regardless, the feeling that all my friends got to go home to see their families and friends in the beautiful sun, laying at the beach in 20-degree weather (which, I must add, they find “freezing” according to my mom) was not easy to begin with and it did not get any easier as the break went by. Even when I was hanging out with family members who claim they remember me from when I was *this* little, but I could not recognize them for the life of me.

But enough sob stories. Let me tell you about the good stuff, because, as surprising as it was, there was a lot of it. Over the break, I took the opportunity to discover Toronto, as well as neighbouring cities, and the break also gave me the time to work on an exciting new project.

In terms of Toronto, one place I frequented was Kensington Market. The atmosphere was so welcoming and happy all the time, and the incredible food was a plus. Another thing I took the time to discover in Toronto was the TTC. I’m not joking. Back home, the only form of public transit was the bus or a taxi, and you only took the bus if you wanted to be smothered between a bunch of extremely sweaty guys (bearing in mind the temperature in the summer, on a good day, is between 35 and 40 degrees Celsius). So, I wasn’t used to subways or streetcars. And that’s why I had my friend force me to attempt riding a streetcar. I know what you’re thinking; my winter break sounds thrilling so far. On a more serious note though, these might sound like small accomplishments, but at least now I can take a streetcar instead of deciding not to go somewhere because the subway doesn’t get me there.

As for the neighbouring cities, I drove up to cities like London, Mississauga, Oakville, and North York. Although I didn’t get to do much in terms of discovering them, I had the privilege of meeting and hanging out with incredible people, who upon hearing that I was an international student, offered up so many things, from a place to stay to a list of places to go. I honestly found it so endearing and thoughtful. And this community that I found in all of those cities parallels to the community I found at U of T and St. Mike’s. So many people from USMC have been nothing but kind to me and have tried their best to make sure I didn’t feel like an alien in a foreign country, which means a lot. Although many plans ended up falling through or not working out for whatever reasons, just the thought that there are locals who want to help me, made me feel comfortable, and I got closer to those people as a result.

Another thing that more or less occupied my break, and helped me discover downtown Toronto a little more, was my role in the upcoming Hairspray production (which you should all come and see by the way). A lot of people might say that it took days away from my break, but honestly when working with the people involved, I got to be a part of something that not only distracted me from all the homesickness, but also made me excited for the future (as in February 15-17, when the show goes up at Hart House Theater. Again, come watch!).

Overall, I can confidently say that my break turned out to be so much better and much less lonely than I thought it was going to be. I met Canadians from so many different places; got to know relatives that I didn’t know I had; learned that streetcars aren’t monsters; worked on a project that makes me happy; and I got to tighten bonds I’ve made with other students at U of T.