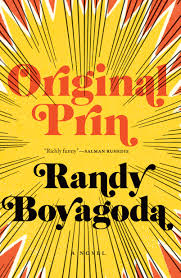 The book follows Prin, a Sri Lankan-Canadian English professor at a struggling Catholic college in downtown Toronto, who commits to becoming a better person after being treated for prostate cancer. Prin becomes part of a plan to save his failing university through an international partnership with a school in Dragomans, a fictional Middle Eastern nation emerging from a fictional civil war. All Prin has to do is spend three days in the country and give a lecture on Kafka, but this is complicated by the presence of his former girlfriend, Wende, who will join him on the journey as a consultant for the partnership.

Original Prin takes a satirical perspective on modern Canadian life but also aspires to unpack the difficulty of navigating the demands of faith, family, work, and temptation in a secular world. To this end, the book sometimes switches rapidly between tones, delivering tongue-in-cheek jokes about Australians in one paragraph while dealing with the intersection of faith and the web of Prin’s personal obligations in the next. Obligation is very much on Boyagoda’s mind in the novel, as Prin spends much of the book struggling to be a good son, father, husband, professor, and a devoted Catholic all at once.

Some of the book’s sharpest humor and most introspective moments arise from the interplay between the roles Prin is expected to fulfil, and how he both meets and fails to meet the standards set for him by himself and others. It is impossible not to notice the similarities between Prin and Boyagoda himself. Both are English professors, both are 2nd generation Sri Lankan immigrants, both work at a Catholic university — they both even have four daughters. Though Prin is by no means an author insert character, Boyagoda is able to create a complex picture of Prin’s internal life by drawing on his own experiences.

On Wednesday, October 3, Boyagoda met with Sam Tanenhaus at the Toronto Reference Library to discuss the novel. Beyond discussing many of the recurring themes in the novel, including faith, family, radicalism, cultural tensions, and secularization, Tanenhaus also asked him several questions about the process of developing the novel. Boyagoda described how he submitted the initial draft of Original Prin as a 600-page monster of a manuscript, and how his editor put him on a strict reading diet away from the novel for several months before they got back together and trimmed it down to the 224-page edition available now.

Boyagoda later responded to questions that asked about when and how he writes, to which he responded, “Whenever I can.” He tapped into the nature of our busy, breakneck culture, and advised the inquirer and any aspiring authors to work in every spare moment — rather than writing in the romanticized manner of creative furies in a coffee shop.

Family is not just a literary concept for Boyagoda — it permeates his life. Boyagoda’s wife and four children were all present at the event, as were some friends, colleagues and students — including us. Whether or not you choose to learn from the story of Prin, there are plenty of lessons to be learned from Boyagoda.

Original Prin is available at Indigo, Type Books, and on Amazon.ca.