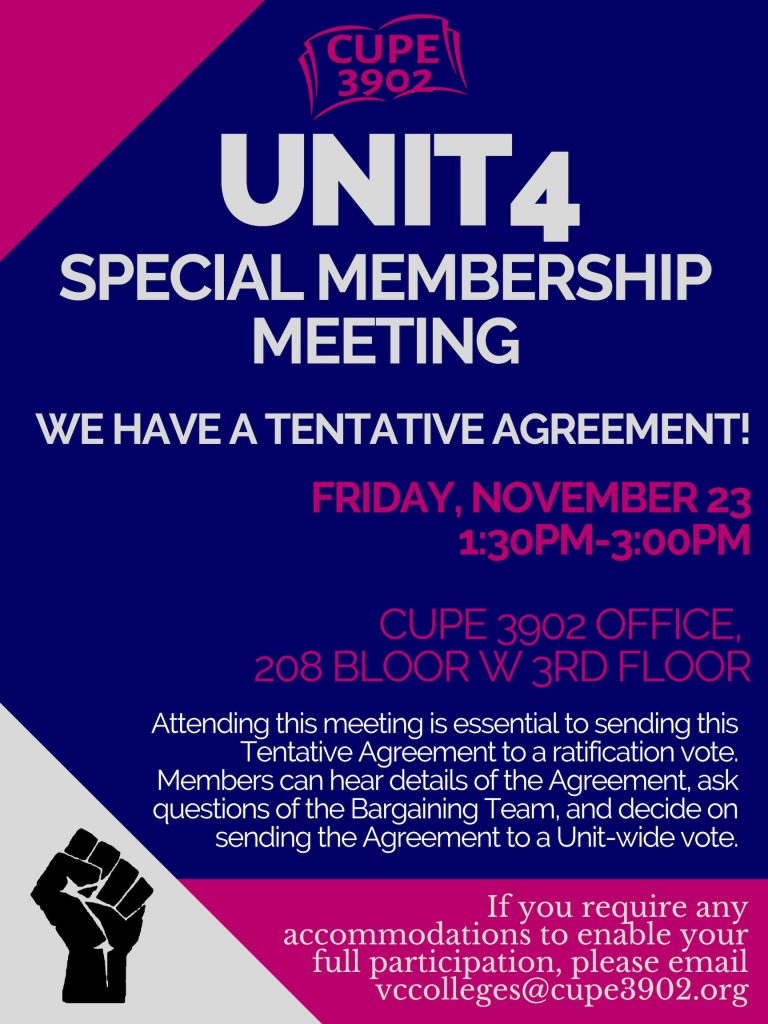 The agreement will apply to all contract academic employees

The Canadian Union of Public Employees (CUPE) Local 3902, Unit 4 reached a tentative collective agreement with the University of St. Michael’s College (USMC) administration on November 15, 2018. This tentative agreement was successfully ratified by members on November 28.

CUPE 3902 is the union which represents contract academic employees at the University of Toronto (U of T), USMC, and Victoria College — all three are separate employers affiliated with U of T, each of whom are all on contracts of a year or less.

CUPE 3902, Unit 4 in particular represents those employed at USMC. Membership includes Teaching Assistance, Student and Postdoctoral Course Instructors, and Sessional Lecturers among a slew of other important roles within the university community. Each member must meet in a quorate meeting to vote on ratification and agreement deals to ensure a democratic method of process gets carried out.

“CUPE 3902 has a two-step process where members vote to send a tentative agreement to ratification,” CUPE 3902 Chair Jess Taylor explained in an email to The Mike. “Members voted to do this on November 23. [CUPE 3902] then opened the ratification vote immediately afterwards with a poll at the meeting and additional polls until Wednesday, December 12, the following week. The vote was then counted on that Wednesday evening.”

“St. Mike’s will be ratifying the agreement as well, and we expect the changes to be implemented immediately,” Taylor said.

This agreement for Unit 4 members was quite beneficial and “saw wage gains in line for what was received for our Unit 1 and Unit 3 members during our last round of bargaining.”

The last general agreement USMC saw came in February of 2018, when the St. Michael’s Faculty Association deliberated on a tentative agreement with administration over a ‘no-board’ with the Ontario Ministry of Labour.

However, this agreement differs as CUPE 3902 represents academic workers on contract and not the faculty at USMC. As Taylor stated, “the nature of work [within USMC Faculty Association] is much more precarious than that of [CUPE 3902] members.” In regard to that, their contracts look much different “with more job security, higher pay, and pensions.” The agreements currently made will only apply to those who are working on contract at USMC.

In following, Taylor stated this ratified agreement will directly show improvement “to the [Health Care Spending Amount] allocation for members, the creation of a Description of Duties and Allocation of Hours Form, gender neutral language, progressive discipline, and paid Domestic and Sexual Violence leave extended to one month, among other gains.” All of which are expected to change immediately.

With ratification already in place, this new agreement will apply directly to those CUPE 3902, Unit 4 members at USMC and will last for a year. As of now, with agreements ratified and in place, it looks like a strike will not be in the near future for these contract academic employees.