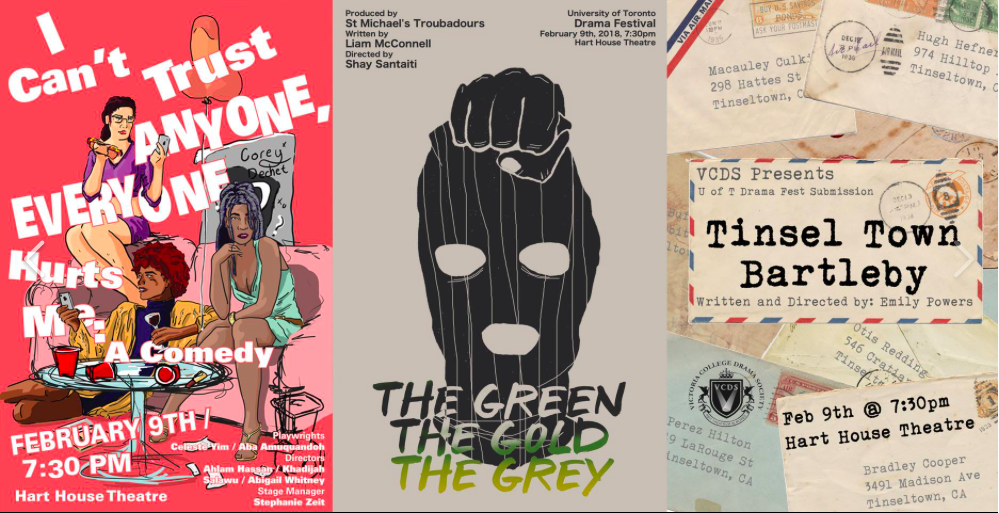 The UC Follies, the SMC Troubadours, and the VCDS take Hart House

The University of Toronto is the nexus of some of the country’s most exciting young talent in the dramatic arts. The University of Toronto (U of T) Drama Festival occurred between February 8 to February 10. Each night, three short plays were presented, all created entirely by students belonging to one of the University’s drama organizations. As suggested by the second night of the festival on February 9, it is with live theatre that the voices of the younger generation emerge the clearest and the most authentically.

The first show of the night was I Can’t Trust Anyone, Everyone Hurts Me: A Comedy, written by Aba Amuquandoh and Celeste Yim, and directed by Abigail Whitney, Khadijah Salawu, and Ahlam Hassan. The University College (UC) Follies introduced us to three young women of colour, attempting to order food at 2:00 AM in Toronto. One of their phones blows up with notifications concerning the sexual assault allegations against the trio’s favourite recording artist. As a result, passive-aggressive comments about one friend’s unimpressive boyfriend escalate into an argument about the individual’s culpability in a relationship. This play derives much of its power from the comedic talents of its cast. As indicated by the declaration of the play’s title, these women are angry at how men continually let them down. The ensemble cast members amble around the restaurant set behind the three leads, ready to emerge as hilarious caricatures of annoying masculine archetypes. The characters are highly individualistic, rejecting the mainstream language of social justice in favour of profanity and the authentic, spontaneous words of young women who derive strength from each other. If the conclusion is somewhat sappy, it reflects the reiterated love between these friends, no matter how cutting their commentary seems.

The St. Michael’s College (SMC) Troubadours presented a tighter, swifter, and more unsettling piece with The Green, the Gold, the Grey, written by The Mike‘s own managing editor, Liam McConnell, and directed by Shay Santaiti. Its subject matter is the Northern Ireland Troubles, presenting a nighttime bombing in 1990s Belfast. Two militant participants in the violence surrounding the Catholic-Protestant sectarian strife are dragged into a warehouse, where three mysterious and impatient figures seek to determine which of their two captives set off the bomb. Actors Rachel Bannerman and Matt Lalonde form the center of the drama as the two captives. Left to their own devices, they erupt in righteous anger regarding their opposing perspectives on the place of Ireland relative to the United Kingdom. This argument at first seems like artificial soapboxing, but this quality comes to appear intentional. Bannerman and Lalonde are repeating the meaningless bigotry inherited from their parents. But even as they bond over a cup of tea, an unexpected noose tightens around their necks. In a stunning reverse, it becomes clear that this is a story about how the agents of an unstable state choose to continue the cycle of victimization rather than seeking the more difficult path of reformative justice. The smooth fight choreography of Emma Keil-Vine and Nicole Bell’s stark midnight lighting are also worthy of mention.

Something entirely different was in store for the third play of the night, the Victoria College Drama Society (VCDS) presenting Tinsel Town Bartleby, which was written and directed by Emily Powers. A Hollywood intern (Katarina Hatzinakos) affectionately preserves various pieces of discarded fan mail addressed to a number of Tinsel Town’s celebrities. After some archive footage depicting the given celebrity is played on a projector screen, the letter-writer occupies center stage to act out a message that will never be read. Some messages are funny, others sad; some shouted, others understated. I personally feel that the final letter, presented by Catholic schoolgirl Jenny (Justin Park) to Otis Redding, is the most original and layered. What emerges from this series of confessionals is that our relationships with celebrities are largely illusory, based on a need to project our desires and emotional journeys onto a distant, monolithic figure.

The night’s spectacle concluded with a public adjudication by Professor Jill Carter. She made a number of incisive comments which inspired this reporter’s phrasing and encouraged the University’s dramatists to bring their stories out into the world. As Professor Carter stated, “Our artists are our healers.” In these short plays about betrayal and celebrity, a lot of pressing issues for young adults can be processed. I encourage anyone to seek out further performances by the University’s drama organizations as the semester proceeds.