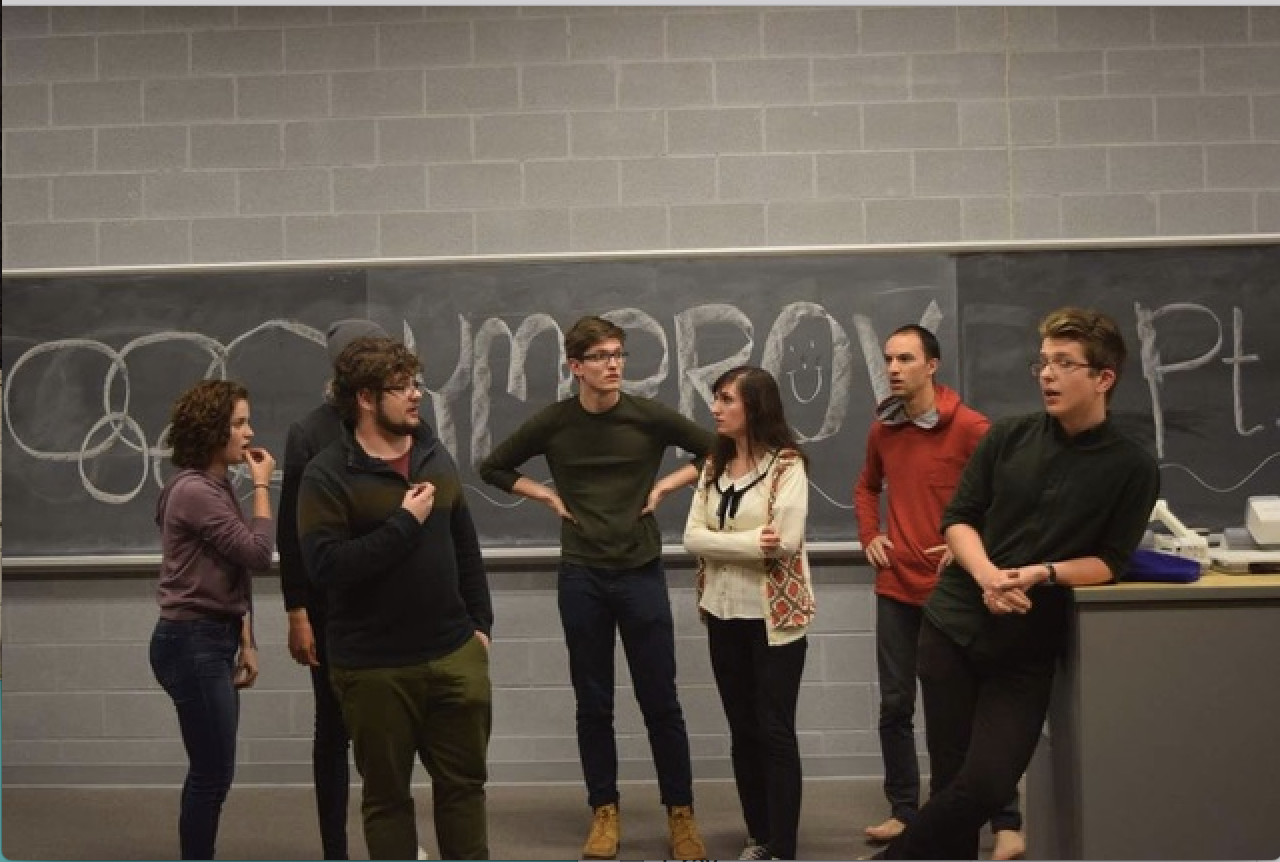 The catharsis of spontaneous comedy

Photo: U of T Improv.

I thought something was Maris, and I was right. One must be Warned, for President Kyle leads a competitive improv group that defeats the rest. Vice President James Hyett’s high quality comedy entertains the apathetic audience. And who could forget the talented pride of the group that is Isobel? All that, I improvised. Improvisational theatre is where actors perform improvised, unscripted material on the spot. As an author, I have an improv mindset when making new characters so that they’re creatively different yet relatable to readers. Improv is a food art your mind can eat, a science, and a cause of death. Befriending personalities of improv will enrich your life. Overall, improv impresses the once skeptical souls, which once included mine.

Here’s a suggestion on where to eat: University of Toronto St. George’s (UTSG) improv shows. There’ll be beer, but the food won’t be on your plate; it’ll be on stage since your meal is entertainment cooked for the mind. I see improv acts as a type of sandwich being served at a restaurant. I pay $10 after tax to buy a foot-long sandwich. It’s about the same price I pay to witness the shows of UTSG’s improv group. The host lists the stories the improv group could perform, and the audience yells which one they like — it’s like picking a sandwich off a menu. The colourful personalities performing are the chefs preparing the sandwich à la improv. The performers’ comedic styles act as ingredients carrying the same comedic taste for which the mind likes. It’s improv’s intuitive comedic charm that makes the mind full of the satisfying feeling of being entertained. The food art here isn’t the sandwich itself; rather, it’s the making of the sandwich, or the performance. Asking yourself whether seeing live improv is better than televised improv is like asking if a packaged sandwich full of preservatives is better to eat than a freshly made one. Seeing improv in person is better than seeing improv through television, for it allows you to interact with the performers as they perform. It thus makes you happier and your mind emotionally healthier. So, here’s some food for thought: for dinner, let UTSG’s improv group feed your mind with entertainment, and you feed your stomach with a Subway sandwich.

Science knows that laughter is the best medicine, which is true; it should be prescribed to everyone. Improv could best administer this medicine, especially UTSG’s improv group. Its actors engage with our hidden sixth sense of laughter we don’t realize we have or even bother to use. After all, the sense of laughter’s an intuitive cognitive process that’s part of our psychological composition stimulated by those who act hilariously. Laughing is the only workout you don’t get tired of since you’re solely exercising your facial muscles. Laughter is also a deadly virus, and no improv group spreads it better than UTSG’s. The audience can’t contain themselves for they can’t contain the contagion of laughter that diffuses throughout the hall. Since UTSG’s improv group caused the deaths of their audience through having them laugh, they’re murderous comedic criminals. So, getting laughter from improv is both a medicine and a sickness that’s good for you.

Although a morbid concept, death could also be cheerful, for our souls gain freedom from an imperfect life and perhaps are headed toward the joyful afterlife. It’s that feeling of freedom UTSG’s improv group delivers when their audiences die of laughter. When improv actors free themselves from reason to pursue what they find funny, their comedic charismatic charm comes through. It’s their comical charm that helps the audience free their repressed happy emotions from their systems. Releasing these emotions frees your soul from a body whose life is perhaps governed by routine, boredom, fear, or sadness. By laughing your troubles away, you allow your soul to attain heavenly happiness in a heaven-like afterlife state. It’s like a near-death experience, except you’re awake and living it. Hence my proverb: a soul’s sole way to freedom is through laughter so that you’ll be happy ever after. So, attending UTSG’s improv shows will cause you to realize that dying of laughter is actually living life.

Because they have comical colourful personalities, I believe improv actors are great individuals to be friends with. I say this despite having no personal friendships with any member of UTSG’s improv group. Every improv act reveals an individual’s true personality when given a story to present before an audience. Improv groups encourage freedom to both laugh and be yourself; this is what UTSG’s improv group does phenomenally well. You’d then become a more laid-back person once you ally yourself with them.

So, anyone could appreciate the art of improv if they see it as a food art, a science, and a cause of death.

Bryan Liceralde is a second-year St. Mike’s student specializing in Political Science (International Relations focused) and double minoring in French and Italian. For the past three years, he’s been a competitor in the Toronto Star Short Story contest writing tragedies and romantic dramas. Although his name is often misspelt, Bryan was once compared to Brian Griffin.