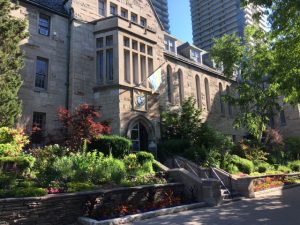 The meeting began with a review of the SMCSU budget for the 2017­–18 academic year. The budget includes information primarily on club and event funding, such as how much money is allocated to the SMC Troubadours and the budget for the 2018 University of St. Michael’s College (USMC) Formal, which took place on March 23.

SMCSU’s total revenue for this year equaled $154,842.43 while its total expenses came out to $107,300. SMCSU revenue is made up of carryover of unallocated funds from the previous year, the funds currently in the SMCSU savings account, and the annual levy it collects from all USMC students ($14 per semester, $28 per year).

While certain amounts of money have been budgeted toward different expenses, not all of it has been spent to date. The budget is split between six categories: administration, academic affairs, arts, athletics, communications, and community life. $14,940 is allocated toward administrative expenses such as payroll, election expenses, and operating expenses. Along with this, $7,910 is allocated toward academic affairs, $31,320 toward arts, $8,380 toward athletics, $5,000 toward communications, and $39,750 toward community life.

More often than not, SMCSU spent under budget for the 2017–18 academic year. For example, of the $500 to be allocated toward Facebook advertising, only $50 has been spent to date. However, some club funding is still being finalized and not all funds have been spent.

Following the budget review, each SMCSU executive had time to speak to their specific roles within the student union, what they’ve tried to accomplished this year, and their hopes for the future of SMCSU. It was also noted that of the nine executive positions, only six had been filled for the year. This severely limited what SMCSU was able to do as the student union recovers from a tumultuous year in 2016–17 that saw the abrogation of the student union.

“Because all of us during the election advocated for transparency amongst SMCSU and the student body,” Strazds began, “What we want to do now is go through each commission and talk about what we’ve done personally on SMCSU and how we kept our promises and go over different milestones during our time here.”

The first executive to speak was Strazds. As Vice-President of SMCSU, Strazds’ primary roles are to organize events on campus, along with assisting and overseeing the different SMCSU commissions.

After Strazds, Higashi, Feise, Sinno, and Russell all spoke about their respective positions. Issues discussed included the new SMCSU Facebook and Instagram accounts, club funding for the various SMCSU affiliated clubs, and community events such as providing reduced price tickets to the Raptors game that took place on February 8.

For current SMCSU initiatives, the 2018 Formal took priority among the executives. The theme, “A Night on Broadway,” featured a DJ, a three-course meal, and photographers.

Another important initiative is the new website, which launched on March 16. The previous URL, smcsu.com, has now been replaced by smcsu.org. The new website features information on SMCSU events and news, the contact information of all six executives, and a section with other forms and material that includes information on academic resources at USMC, club recognition and budget forms, and the SMCSU constitution and bylaws.

While the website’s debut was delayed because of problems connecting the domain, SMCSU executives utilized social media to reach out to students.

Toward the end of the meeting, the focus shifted to next year’s SMCSU. Each executive expressed a desire to provide guidance to the new council during its transition to power.

“For next year’s SMCSU, we’re excited to work with them, and we have a lot of ideas and challenges that we faced that I believe that, in working closely with them, and having them elected before next year, we can help them toward the end of April and in August so they can have a good start,” said Douek.

Among these ideas for next year’s SMCSU is a first-year committee. Seeing as SMCSU executives are required to be at least in their second year, this committee intends to have first-year USMC students more involved on campus. According to Strazds, the idea for the committee was brought up as a possibility for the current year. However, with only six out of nine executive positions filled, the council did not have the resources to create a first-year committee. This would also give first-year students vital experience in student government, which would help the potential transition to an executive position after first-year.

In closing, Douek gave her assessment of SMCSU’s accomplishments this year, while providing optimism for the future. “Overall I think that we did a pretty good job achieving what our core goals were, which was really to have a more positive experience at St. Mike’s and have the rest of U of T have a more positive outlook on what we are and who we are as a college, and also to be more transparent,” Douek stated. “And I think we achieved those goals, which were the foundation for what we wanted to do.”