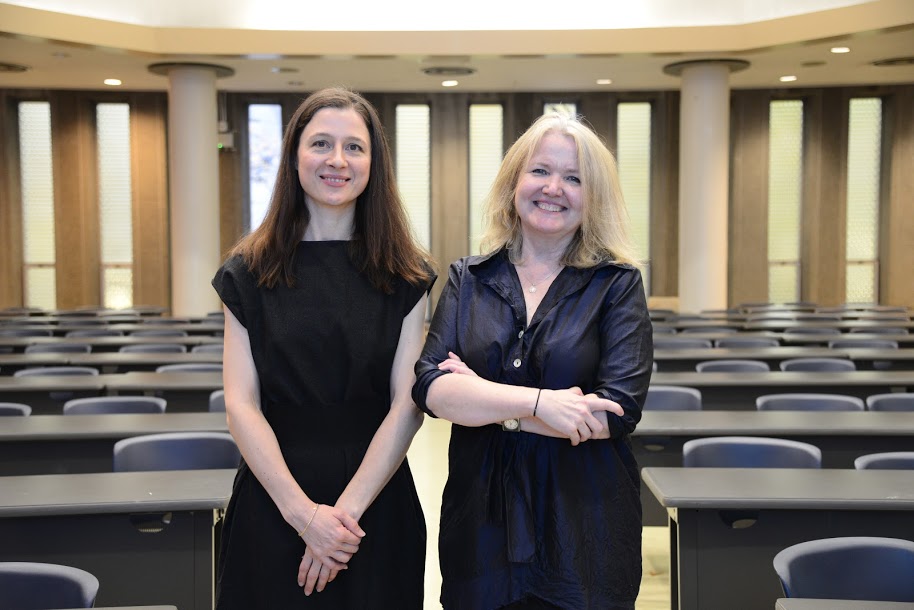 A conversation with Jessica Johnson and Anne Kingston

When Jessica Johnson, Executive Editor and Creative Director of The Walrus, and Anne Kingston, Maclean’s writer and award-winning journalist, began collaborating on Book and Media Studies course “#MeToo and the Media,” they encountered unexpected backlash from friends and fellow journalists. “The first question is often ‘has #MeToo gone too far?’” Johnson told The Mike. “A lot of my guy friends have been very curious and want to come visit because they want to know, ‘What are you people up to?’” Unsurprisingly, none of the 150 or so students enrolled in the class questioned the necessity or validity of the course.

Johnson and Kingston were excited to encounter so many students engaged with the subject of #MeToo and how it informs, and is informed by, the media. “On the very first day we asked everyone why they took this class,” Johnson recounted. “They all had a different reason why they were interested in #MeToo, from issues of race, issues of pay equity, issues of gender, journalism, the law… and I think that getting to talk to [them] every week about a specific aspect of it has been huge in shaping our understanding of how this fits in society.”

One of the major challenges of teaching a #MeToo course stems from the nebulous nature of the topic: what exactly is #MeToo, anyway, and how can it be taught? Kingston acknowledged this worry: “The question becomes, ‘What is #MeToo?’ Is it a social movement or is it a hashtag campaign — a powerful one — within a broader social structural movement? Is it a wave of feminism that is going to usher in the sort of structural changes we saw in the 60s and 70s? So when we talk about a ‘#MeToo allegation’ there is no uniformity.”

Johnson agreed that the course content might initially seem ambiguous, adding, “There’s no guidebook for us [and] no #MeToo textbook… yet! So we can’t say, ‘here’s the definition of #MeToo’ — all we can teach is […] how it is being used.”

Johnson and Kingston also need to navigate lecturing on a sensitive issue while remaining objective. Rather than politicizing the course content, they focus instead on the intersection between media, #MeToo, and the ways in which media channels can be energized or exploited. Kingston insisted on remaining “cognizant of the fact that the parameters of the course are #MeToo and the media.” She added, “We have to figure out the balance between the two things. We’re looking at how the #MeToo movement reflects the current state of media […] and #MeToo told us a lot about media priorities [and] biases that became fodder for more [#MeToo] stories.”

It is hard to avoid politics when teaching such a polarizing topic. “There were two schools of coverage in the beginning,” Johnson explained — those who celebrated the media attention given to women’s voices, and those who worried that men would be falsely accused.

“There has been… concern about the world going riot, men being unfairly accused, that these false allegations would run rampant,” Kingston added. A lot of the worry surrounds misunderstanding around consent.

“Consent is actually the most interesting part of the conversation,” Johnson said. “I realized that… the dilemma that was expressed [in a lot of cases] was a misunderstanding about what consent is.” This lead to The Walrus publishing, under Johnson’s leadership, a 6,000-word feature on the evolving notion of consent and the shift toward consent pedagogy in schools. “But I don’t think it’s really reached the broader community,” Johnson said, acknowledging the lack of consent education in non-educational spaces.

Kingston added that #MeToo’s reception has “been moderated by cases like [Al] Franken and [Aziz] Ansari that have occupied a lot of oxygen.” These ambiguous, high-profile cases have received a great deal of ambivalent, back-and-forth media coverage and have created a tension around whether #MeToo has the potential to ruin the lives of (arguably) innocent men. This backlash has further muddied public understanding of consent.

The “#MeToo and the Media” course content can be difficult to navigate, both because of its emotional sensitivity and because #MeToo-based media stories are constantly in flux. “These stories aren’t just a one-and-done,” Johnson said. “They might come in and out of the news cycle. The Al Franken case is a story that broke, it looked like one thing, it turned into another thing. [The New Yorker] piece sort of turned the conversation on its head again, and it’s [still] not done.” She recalled hurriedly rewriting her lecture after a new story came out about the case she was about to teach: “It is… a course that’s basically live-taught.”

The syllabus covers a wide range of media moments, from the short but incendiary Alyssa Milano tweet, to the controversial Jian Ghomeshi essay “Reflections from a Hashtag,” to a Saturday Night Live skit. Notably, the media platforms that publish #MeToo content are numerous and varied, and essays on #MeToo are just as often seen in prestige publications as lifestyle blogs — though Johnson recalled receiving backlash after putting a #MeToo-related story on the front cover of The Walrus, inviting critics’ concern that the publication would become a “women’s magazine.”

“In the early days this issue was taken up more ferociously by women’s feminist blogs, women’s magazines… women are more engaged in it, feel more of a personal investment in these issues,” Kingston explained. She notes that since then, #MeToo journalism has expanded into the larger realm of media and even leaked into more traditionally masculine venues like The Economist.

The “media” element of “#MeToo and the Media” therefore encompasses much more than a traditional print newspaper. “#MeToo is very much a function of the intertwining of two forms of media,” Kingston said. “Mainstream, i.e. the New York Times story and The New Yorker story about Weinstein that exploded, then social media, [which created] the hashtag. The two things really dovetailed… so it’s important in this class to look at different forms of media.”

#MeToo journalism is published in a range of places, from prestige publications to less-acclaimed publications like Babe, which initially broke the Aziz Ansari story. Incorporating this range of media creates a space for conversation around how the publication platform may affect the story that gets told. “We examined the quality of the journalism within the [Aziz Ansari] story,” said Kingston, revealing ways in which problematic fact-checking contributed to the story’s divisive reception.

Johnson and Kingston have each cultivated a #MeToo journalistic niche throughout their careers. “When Jian Ghomeshi broke, I was not working in media at the time,” said Johnson. “It prompted me to write a personal essay that was published in The Walrus and it made me realize there was a need for writing about that kind of experience.”

Kingston hasn’t written anything personal but rather has reported on many of the watershed moments of the #MeToo movement. “I’ve written about gender and equity for literally decades now,” she said. She covered the Ghomeshi and [Bill] Cosby trials, and has written about a range of feminist issues, including gender inequity in the workplace, motherhood, and assault. “For me, #MeToo was huge, obviously, but… I wasn’t surprised. It was like, to use a conventional metaphor, a dam about to break. This reckoning we’re talking about now is years and years in the making.”

“We make a good team because Anne has been in the courtroom for Cosby and Ghomeshi, and I have done a lot of personal writing,” Johnson said. “The Ghomeshi story was really huge in Canada and it was the first time in my career we were talking openly about issues of sexual consent and assault. I thought a lot about [#MeToo] and we [at The Walrus] have developed new reporting standards.”

One of the developments at The Walrus involves a shift away from reporting physical descriptions of people, such as mentioning what a sexual assault victim was wearing or the race of the perpetrator. “Most of the time [physical descriptions] exist to insert a class bias [and] we imbue character from physical characteristics,” Johnson explained. “If you just say ‘a woman,’ the reader instantly infers something different from that… it’s very important that the media thinks about how it covers victims.”

Kingston agrees with this practice wholeheartedly. “[A woman’s] background is not germane to the fact that she was sexually assaulted or the relevance of her story.”

Ultimately, #MeToo is a movement concerned with far more than issues of consent, date rape, and feminism — though these issues are all deeply woven throughout #MeToo. At its heart, #MeToo is a revolution against the structural power imbalances that exist everywhere: in the workplace, in the classroom, on the street. Kingston questions the popular notion that #MeToo is about “the ubiquity of violent harassment in the workforce” — though certainly it has unveiled this very ubiquity — arguing, “the real issues have to do with imbalance, power, exploitation.” She points out that the #MeToo revolution is about issues of invisibility and erasure — whose voices are heard (historically men’s) and whose are ignored (historically women’s). The revolution isn’t all about gender either; “The first voices who could say ‘me too’ were high-profile, white actresses,” Kingston said. #MeToo is about acknowledging a culture that conflates privilege and class with visibility and voice — and finding a way to talk about it.

“#MeToo and the Media” is above all an investigation of the forces that have propelled a single tweet into a sociopolitical movement. #MeToo gave a voice to those who were previously invisible and gave them words to say things that were previously unsayable. “#MeToo isn’t just about a hashtag or a movement… it’s about how we don’t have a mechanism to talk about these basic human experiences,” Johnson noted.

The course celebrates what the movement has done for women; however, Kingston noted, “[There is a] sexual script evident in #MeToo… women are the gatekeepers.” The course exists both to recognize the change #MeToo has enacted — as well as to reveal the important work that still needs to be done.