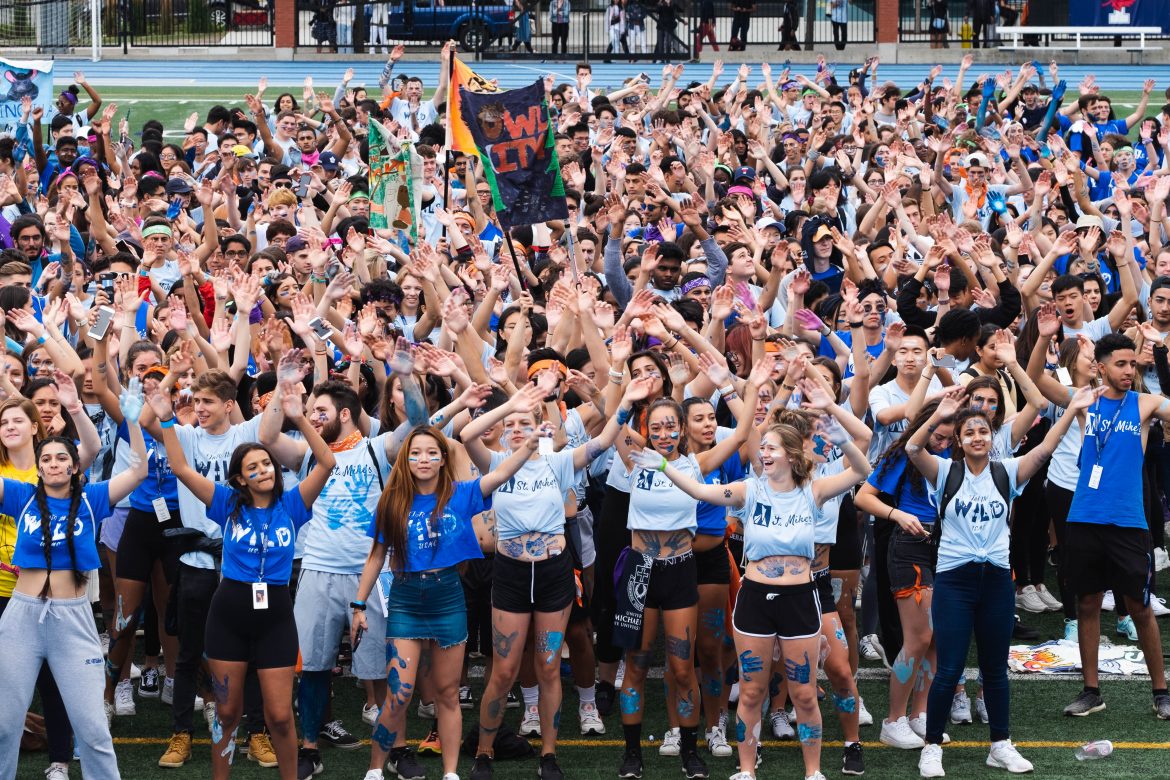 An Orientation schedule that will Hoikety Choik your socks off!

With this being the first fully in-person Orientation at University of St. Michael’s College (USMC) since 2019, the Orientation Team has curated a schedule that is sure to have you hyped for the first week of school, and more importantly, oriented to the resources that U of T and USMC have to offer.

On day one, the Team has planned a day full of traditional St. Mike’s events. Students will begin the day with Registration, followed by Opening Ceremonies, and a lunch break with empanadas catered by Gaucho Pie Co. After lunch, comes Invocation: a traditional ceremony held in Convocation Hall to welcome students to the University so that they begin and end their journey at the University of Toronto in the same place. Speakers include St. Michael’s College President, David Sylvester, and Orientation Coordinators, Alessia Baptista and Sophia Poulimenakos.

The Orientation team will then head back to USMC for Wellness Rotations. Traditionally, St. Mike’s holds a mass during Orientation. This year, the Orientation team has decided to offer mass during a rotation, providing students with the option of mass, yoga, meditation, or zumba, so that students can participate in various spiritual practices regardless of their religion. Later that evening, SMC will head to Varsity Stadium to watch a Varsity Blues Football Game and support our Varsity Blues!

Day two is a little more action packed, with activities such as the Campus Tour Scavenger Hunt which gives students the opportunity to become acquainted with U of T’s large campus, while staying true to the Orientation theme of “Treasure Island”. Students are in for another treat in the afternoon, as the ever-so-chaotic Games Rotation is back! Orientees will move from station to station with their teams to compete in fast paced, minute-to-win-it style games to rack up O-Cup points for their team.

After an action-packed day, the evening brings a chill movie night for students, with 6 movies to choose from! Snacks provided will be sponsored by Kernels popcorn so students can have a savoury treat while watching a movie with their new friends.

Day three begins with Academic Orientation: a time where U of T professors from various faculties are invited to speak to students about their respective programs. Students will also have the opportunity to ask questions to professors during the Networking Social that follows Academic Orientation. In the afternoon, the Orientation Team has planned a carnival on campus with an inflatable obstacle course that will fill the quad, as well as other games like spike ball and bubble soccer on back campus fields. Of course, the Team never fails to deliver, as there will be an ice cream truck to complete the carnival atmosphere. The star of the evening brings us to the Orientation Formal, held at the Hockey Hall of Fame this year. Students will dance the night away and have the chance to take photos with the Stanley Cup!

The final day of Orientation always brings the most energy and chaos. Orientees will begin the day by painting themselves blue before heading to Varsity Stadium for a cheer-off with the other colleges! Naturally, the way our college yells the Hoikety Choik will guarantee us the win. Following the cheer-off, all the colleges will participate in the best event of Orientation: The Parade!

After losing our voices at the Parade, students will have the chance to explore various clubs at U of T during the University of Toronto Students’ Union (UTSU) clubs fair. The night will end at USMC with closing ceremonies, and of course, the traditional event that is Kelly’s Korner (aka, St. Mike’s open-mic night!)

This year’s Orientation is sure to bring nothing but fun times and long-lasting friendships. By attending every event, you’ll be sure to start off your first year at U of T with confidence and a new family here at St. Mike’s.