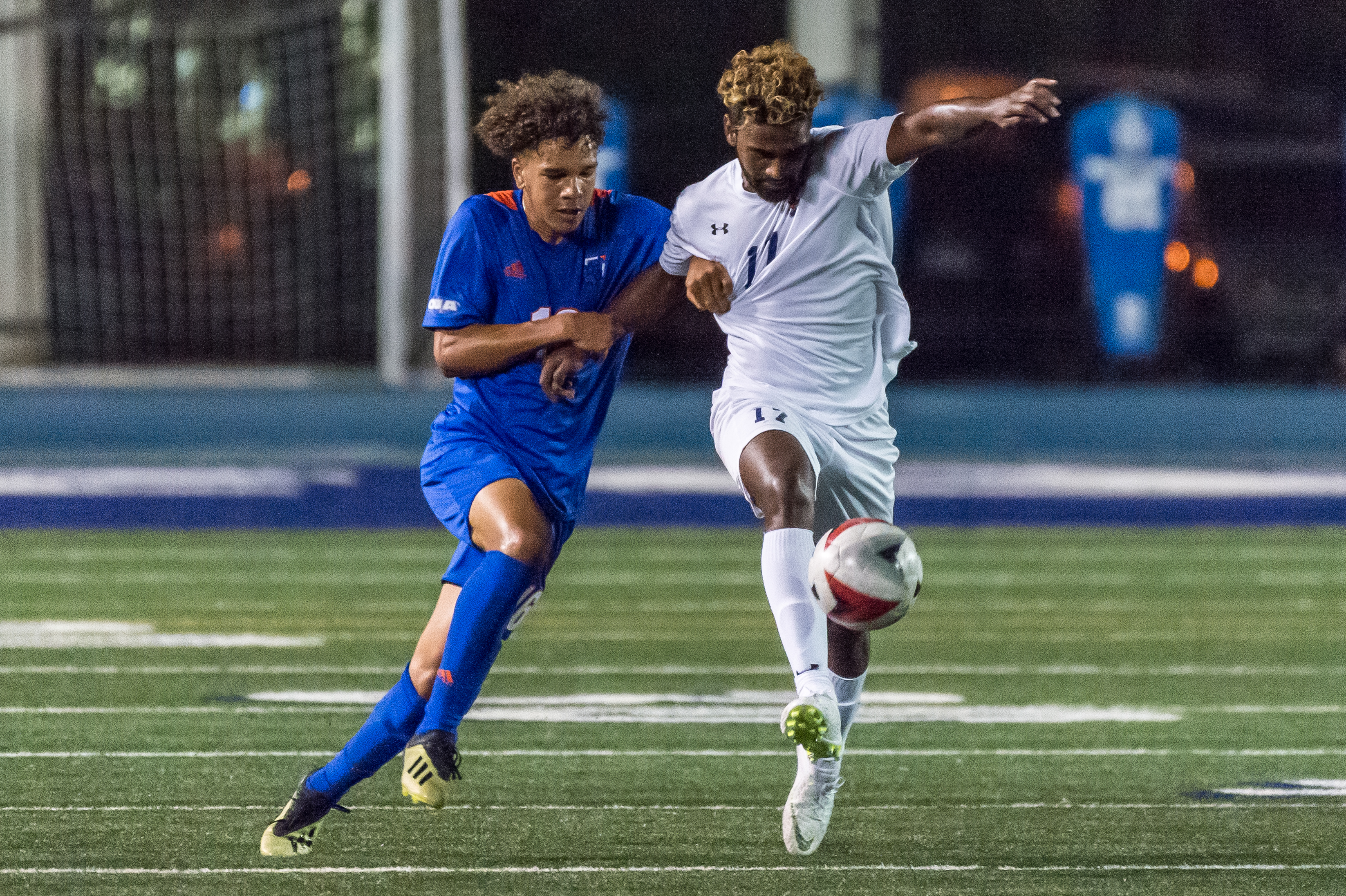 September 2016 marked the last time the Varsity Blues men’s soccer team dropped points to the Ontario Tech Ridgebacks. In their five meetings since, the Blues have routinely demonstrated that they are the superior side, scoring 15 goals and conceding just three against their Oshawa-based opposition. This historic superiority was nowhere to be seen at Varsity Stadium on Friday the 13th. The disciplined Ridgebacks matched the Blues in every department, consigning the home team to its first draw of the season.

The Blues only found their cutting edge after the Ridgebacks had opened the scoring in the 54th minute, hitting an immediate equalizer through fifth-year midfielder Atchu Sivananthan. As both teams continued to search for the winning goal, severe weather conditions forced the match officials to call the game in the 75th minute.

The result and the manner in which the two goals were scored were both fair reflections of the end-to-end game. Still, the Blues will undoubtedly rue not claiming the three points, particular as their title rivals, the Carleton Ravens, earned maximum points over the weekend.

The Blues started in a 4-1-3-2 formation and demonstrated their attacking intent early on through a high defensive line. The Ridgebacks employed a tight backline that restricted the Blues’ space and nullified striker Artem Tesker’s threat. Tesker played the majority of the game with his back to goal but he failed to hold up play or dribble past the opposition’s organized defenders.

Frustrated by the Ridgebacks’ stubborn defence, the Blues’ midfield continued pushing forward to support the attack. This left the middle third of the pitch free for the visitors to control, thereby also preventing the Blues from effectively building out from the back.

To compound their problems, the Blues were also ineffective on set-pieces throughout the first half. Defender Kenny Lioutas made a number of good deliveries into the final third that his teammates were unable to connect with. Meanwhile, defender Marko Mandekic spurned two golden opportunities from close-range free kicks by opting to shoot tame efforts straight at the Ridgebacks’ goalkeeper instead of attempting to pick out a teammate.

The Blues returned with greater intensity in the second half. They thought they had taken the lead in the 47th minute with a Tesker goal after chaos in the box, however, the linesman flagged for offside. The call proved to be the tipping point for the Blues’ coaching staff, who exploded on the sidelines, loudly arguing with the match officials.

The Blues likewise adopted a more aggressive approach to the game, keen to win the ball back and find the opener. They would instead end up conceding a free kick 35 yards away from goal soon after on the left side of the pitch. A complete breakdown in communication in the Blues’ defence allowed Ridgebacks forward Fadi Salback to score the set-piece. Salback lashed a powerful shot past the crowded box and beyond Blues goalkeeper Sebastian Sgarbossa.

The goal proved to be the catalyst for the Blues, who instantly found an equalizer. The Blues earned their own free kick from 35 yards, which Mandekic dispatched towards Sivananthan, who floated a header into the net.

As the Blues searched for the winner, Jacob Maurutto-Robinson displayed consistently impressive decision-making and ball distribution, while Koosha Nazemi provided a reliable and speedy outlet down the left flank.

The Blues continued to threaten as the game rolled on. But they spurned a couple of good chances due to a lack of anticipation and natural finishing in the final third. Given this shortcoming, it is undeniable that the absence of then-top scorer Matthew Roberts should be a key feature in any autopsy of the Blues’ struggles. Roberts had two goals to his name despite having played just 155 minutes this season. If he were available, he would have possibly provided a greater dimension to the Blues’ attack.

Instead, the match came to a grinding halt in the 75th minute due to lightning. With the spoils shared, the Blues ended the day with 10 points out of a possible 12 after four games in the regular season.