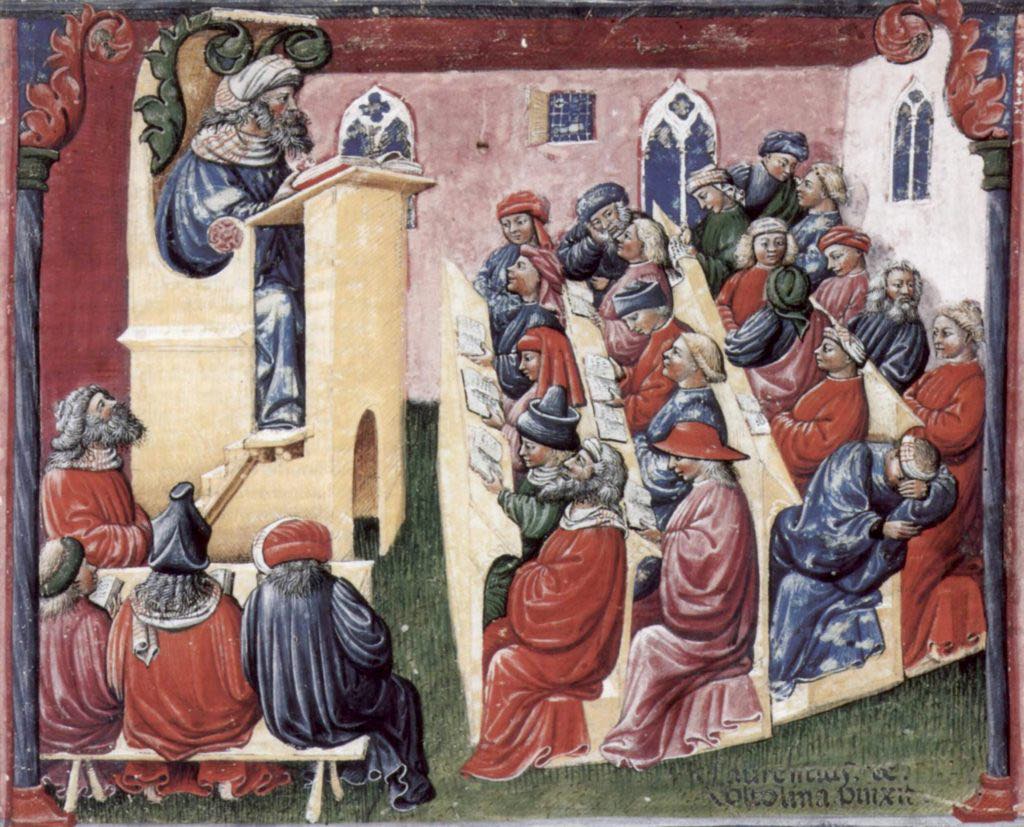 On learning as a call to reflection, community, and worship

On January 25th, students and scholars from around the University of St. Michael’s College (USMC) gathered for the college’s Student Colloquium, a full-day conference centred on the question, “What is Learning?” In seeking to respond to this query, students delivered papers on topics ranging from the nature and purpose of education, to the structure of scientific knowledge, to the challenges facing Catholic and humanistic education in our own time. Scholars of St. Michael’s, in turn, addressed the themes that emerged from their panelists’ papers with insights derived from their own studies.

I had the privilege of presenting, alongside Jon Spears, on a panel chaired by Professor Jean-Pierre Fortin titled “Education and Self-Development.” In my paper, I examined the trials of William Stoner and Timofey Pnin, fictional professors of literature in the novels Stoner and Pnin (by John Williams and Vladimir Nabokov, respectively). I focused on Stoner and Pnin’s responses to the severe alienation that they face within their academic communities.

During the discussion period that followed the formal panel, Bernadette Guthrie remarked that it seemed as though Stoner and Pnin are alienated within their communities both as a result of the efforts of their peers and their conscious self-isolation in the course of their studies. Ultimately, she asked, does this suggest that learning and the academic life are individualistic endeavours whose successful pursuit thus necessitates isolation?

This important question remained with me throughout the rest of the Colloquium and, indeed, until the present. It is a question that I think all students reflect on in one way or another at some point in their academic careers. Such a question asserts itself in the mind of one sequestered in their dorm room or library cubicle late into the evening, completing an assignment or studying for an exam with fervent intensity. At least, such a question has asserted itself in my mind on such an occasion. It seems to me that one’s response to this question is of the utmost importance to both one’s academic career and, more broadly, the development of one’s character. The presentations delivered by the students and scholars of the St. Michael’s Colloquium, I suggest, sum to a compelling response: learning is best understood as a call to individual reflection as well as a call to communion with our world and its inhabitants and a lasting relationship with God.

Received wisdom increasingly suggests that the purpose of a university education is solely to earn the diploma needed to enhance one’s chances of obtaining a good job. Such a worldview would hold that studying disciplines like the liberal arts is a waste of time and money that would be better spent preparing oneself for more sustainable employment. “Learning” is commodified, becoming a quantitative measure of progress toward a specified goal rather than something meaningful in its own right. It was this rather limiting belief that many of the Colloquium speakers, including me, sought to refute.

Learning, as Jon Spears and I suggested during our panel discussion, is best understood as an end in itself, a way of life that invites reflection and growth. One must embrace the pursuit of knowledge in all spheres of experience by seeking to understand the fruits of one’s study in a variety of contexts — academic, social, and cultural — and to draw on those same contexts to enrich one’s understanding of the world.

Many of our peers echoed this view. In her discussion of Jacques Maritain’s theory of education, Maryrose Doucette emphasized the nature of learning as a source of spiritual and intellectual liberation. Doucette suggested that the freedom that education offers — the ability to think for oneself and form one’s own opinions — is a sign of hope for our collective capacity to understand our world. Learning thus empowers us to reflect upon our vision of a good life and a good society. In his presentation, Rashad Rehman identified such liberation as one core reason to pursue a liberal arts education. To Rehman, such an education transcends the careerism and economism that he identified as endemic to modern educational discourse. Ultimately, the presentations of the Colloquium suggest to me that learning invites growth. The achievement of knowledge calls one to formulate one’s own view of the world by appraising the opinions of others and reflecting upon what one values and believes.

Of course, to suggest that learning is solely an intensely personal endeavour implies that one learns most successfully by oneself and for oneself. We know that this is not true. While the fruits of one’s learning are internally apparent, they also reveal themselves through our interactions with others. It is our duty, as learners, to focus our gaze outward: to share what we have learned with those around us. I am surely not alone in feeling, after I have learned something I find fascinating, the desire to share that knowledge with my friends. Humans, as learners, possess the drive to employ our expertise in the service of others. Learning thus calls us to communion with our world and its inhabitants.

During the conference, my peers emphasized three forms of the call to communion. Lara Connell focused on the value of friendship. In the face of the variety of challenges that the modern university poses, Connell argued that the cultivation of authentic friendships, founded on the realization that friends recognize and share certain truths, enables us to know God and His creation better. Learning thus brings us into communion with our friends, those that seek to know as we do. James Coady, in his presentation on the relevance of Søren Kierkegaard’s thought to the project of reclamation within Catholic universities, identified service to others as a way in which students come to understand their academic place and life purpose. Indeed, learning — whether religious or secular — calls us to serve others. The knowledge we gain in learning entails a realization of the value of that knowledge as a means of addressing the problems faced by our brothers and sisters in Christ. To my mind, substantive learning necessarily intermingles knowledge attained with the question, “How can I use what I have learned to help others?” During their presentation of a formal theory of scientific change, Neo Yin and Kye Palider expanded the scope of this question by pushing us to consider how we can understand the efforts of preceding generations of scientists to effect change. Our appreciation of the significance of the contributions of those that came before us and the concomitant recognition of our shared intellectual heritage empowers us to connect with our peers in the present. Learning allows us to achieve this appreciation. Learning thus calls us to communion with others in friendship, service, and our acknowledgement of common traditions.

Finally, but perhaps most importantly, learning calls us toward a stronger relationship with God. Our awareness of our role as Christian learners calls us to recognize the presence of God in our lives so as to enter into a more lasting relationship with Him. Our love for God, in turn, pushes us to know Him better. Through internal reflection and communion with others, we further our appreciation of and engagement with His works.

Though many of the Colloquium presenters engaged with this call, I particularly want to consider Nathan Williams’ discussion of the value of understanding learning as thanksgiving and praise to God. Drawing on Simone Weil, Williams argued that we develop our ability to open ourselves to God in worship when we purposefully pay attention during our studies. Paying attention empowers us to recognize the evidence of God’s creation that surrounds us as reflections of His Truth in our lives. Williams suggested that our recognition of our status within creation, rather than apart from it, enables us to feel a sense of solidarity with our world. Learning about God and His works enables this recognition. Ultimately, learning calls us to situate ourselves within God’s creation and to pay attention, in a substantive way, to what His creation teaches us. As we do so, we build a lasting relationship with Him.

In sum, the presentations of the St. Michael’s Colloquium suggest that learning entails three calls: the call to internal reflection, the call to communion with our world and its inhabitants, and the call to a stronger relationship with God. By recognizing the significance of each of these calls in our lives and responding to them in meaningful ways, we become “learners” in the truest sense. In so doing, we embark upon a journey of learning that empowers us to lead academically, socially, and religiously fulfilling lives.