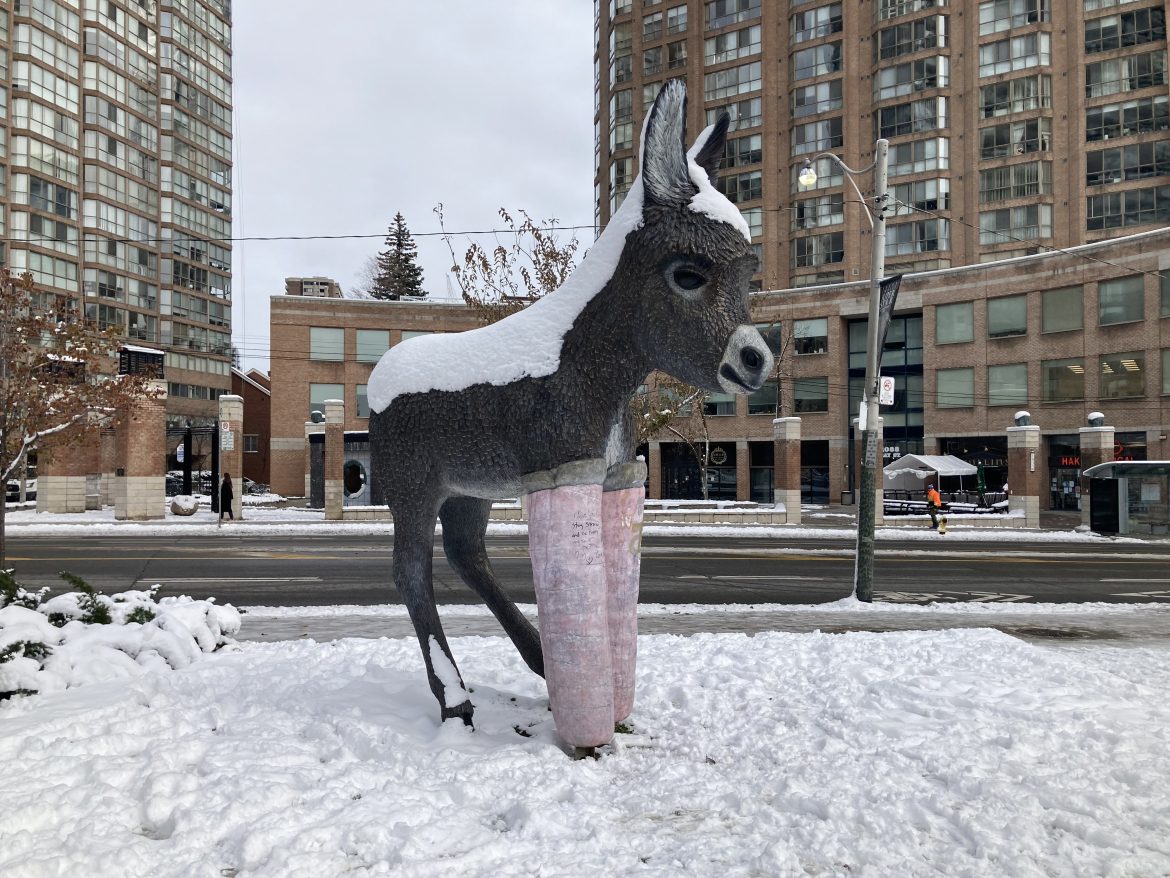 How these nativity set staples point to the meaning of Christmas

If you have meandered down Bay Street anytime in the last two years, you are likely familiar with the bronzy, bandaged donkey that roosts on the outer fringe of St. Michael’s College.

I recall peering at Primrose, the donkey’s name according to BlogTO, through a wire fence upon her unveiling. My friends and I wondered aloud: what could it mean? Was the culprit of this wounded beast the same visionary who installed the playground of woodland creatures in the parkette nearby? Did the broken legs of the donkey indicate the outrageous weight of Jesus in Mary’s womb on the way to Bethlehem? Glancing between the steeple behind us and the gumball-pink casts before, the only emotion evoked was perplexity.

But Primrose would evoke ridicule as well, as evidenced by a few episodes of defacement that occurred in the following year. Her casts, prime territory for vandal activity, once bore the words, “Kings, I love you. Hope you get better. Luv U!” on one leg, and a frantic scribble about repentance and sin on the other. These confused messages looked only natural on the donkey, herself a confused symbol of meme and meaning.

Perplexing and ridiculous donkeys are not new. In the Book of Numbers, the story of Balaam’s ass recounts the only talking animal in Scripture, with the notable exception of the serpent in Genesis. The story goes that Balaam, disobeying God’s wishes by setting out for Moab, is stopped along the way by an angel of the Lord. Balaam cannot see the angel, but his donkey can. The donkey rears at the sight and turns off-road, crushing Balaam’s foot against a wall and finally falling under him when he beats her three times. The donkey speaks:

Of the two other famous donkeys in Scripture, one does not exist for certain. The donkey that carries Mary along to Bethlehem bears no mention in the Gospels, yet remains an appendage to the image of the travelling Holy Family in the imaginations of many. The other, more documented donkey is the one that carries Christ triumphantly into Jerusalem, the basis of Palm Sunday. In biblical times, donkeys signified both royalty and lowliness; a ride fit for the paradox of a humble king. “Behold: your king is coming to you, a just savior is he, / Humble, and riding on a donkey” (Zechariah 9:9, NAB). Fittingly, the Church celebrates the Feast of Christ the King on the last Sunday in Ordinary Time–one week before Advent, this Sunday, the dawn of the Christmas season.

In nativity sets around the world, on church lawns and in home altars, both donkeys and angels may populate the scene. In the second chapter of Luke’s Gospel, angels appear to shepherds out in a field on night watch. “Glory to God in the highest,” the heavenly hosts sing, and the shepherds hasten to pay a visit to the newborn child. Perhaps there were donkeys, and certainly there were angels, in that place where the king was born.

St. Mike’s is also home to an infamously unrecognizable angel. The metallic abstraction that looms in the Quad is indeed our namesake, St. Michael the Archangel. Between this statue and the monument of Primrose, we can say that both beasts and angelic creatures commune on these unlikely grounds. One might go so far as to say that the company we keep has not changed so drastically from biblical times.

Looking around, you might ask: what could it mean? I hope to leave you with the following semblance of a response.

In G. K. Chesterton’s poem The Donkey, an ass with a “monstrous head” and “ears like errant wings” narrates the four stanzas. From the beginning, he is dubbed ugly and dumb, “a tattered outlaw of the earth”. But, he tells us, he has a secret:

Fools! For I also had my hour;

One far fierce hour and sweet:

There was a shout about my ears,

And palms before my feet.

His hour of glory and sweetness comes when he carries Jesus into the palm-dressed streets of Jerusalem. This donkey suggests that even beastly things can give glory to God. Even the lowliest of creation can rejoice in the coming of a Saviour. And the Saviour is announced again and again: into the world, into Jerusalem, onto altars every day. “He’s coming” is the whisper on the winter wind; the rumble through riotous crowds at the city gates. No end of the earth is exempt from the power and the glory, not even the little plot belonging to St. Mike’s.

“Kings, I love you,” read Primrose’s cast, and perhaps she joined for that glorious hour the tradition of donkeys fit for kings, until the words were scrubbed off and she was restored, more or less barren of meaning. Nevertheless, what donkeys and angels ought to remind us of is the new beginning that began when Christ first entered the world, a king in swaddling clothes.

Christmas is often aped in shopping mall set-ups, dripping with consumerist angst, by droll elves and jocular, pot-bellied men clad in red and white. Like the complex of metal that makes up St. Michael, the outward appearance of the thing must be looked past to reveal the seed of meaning buried within. In the case of Christmas, avant-garde donkeys and angels might not immediately register as heralds of meaning. But they can be, because together and traditionally they have carried and announced the coming of a king. In your next meander down Bay Street and into the heart of St. Mike’s, let our strange statues signpost something meaningful: that we too can join joyfully in the heralding of the king, whose coming is the cause of the Christmas season.