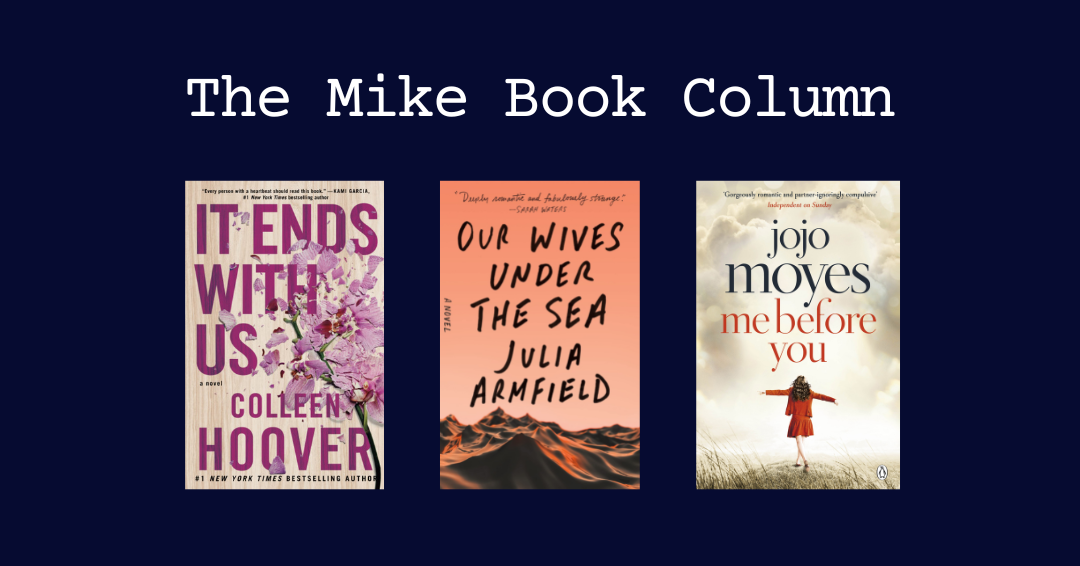 Our Wives Under the Sea – by Julia Armfield

Herman Melville, describing the mysterious, unexplored depths of Earth’s marine realms, once wrote: “Consider the subtleness of the sea; how its most dreaded creatures glide under water, unapparent for the most part, and treacherously hidden beneath the loveliest tints of azure”. This sentiment of unease surrounding the aquatic unknown has long been the subject of literary fascination, especially in genres such as science fiction (Jules Vernes, anyone?) and horror. Julia Armfield’s Our Wives Under the Sea is a fresh, subversive take on the speculative fiction trope of underwater missions gone awry. In her debut novel, Armfield weaves a heartwrenching, nautical gothic tale of queer love and grief. The book follows a sapphic couple living together in the aftermath of a mysterious event that has altered the dynamic of their relationship. When Leah, a scientist, returns home after a tragic accident on an underwater exploration trip, her wife, Miri, realizes something about her is off. Determined to discover the cause of Leah’s increasingly haunting, inexplicable behaviour, Miri embarks on a search for answers. Our Wives Under the Sea oscillates between both women’s perspectives, highlighting their tender, loving memories together, their difficulty being apart, and their struggle to coexist once they reunite. The author’s prose is lush and suspenseful. In Leah’s chapters (which mostly take place on a submarine), Armfield does an excellent job painting the ship as an isolating, claustrophobic space. Fans of Jeff Vandermeer’s Annihilation will revel in the same kind of profoundly cryptic, distorted tale of first contact between humans and nature; of explorers going on an expedition and coming back a shell of their former selves. Our Wives Under the Sea perfectly captures the liminality of the ocean while also leading the reader to grow attached to the two women who are swept up in its mysteries.

It Ends With Us – by Colleen Hoover

It Ends With Us is yet another beautifully written story by Colleen Hoover that chooses to tackle the darker side of relationships. The plot focuses on Lily, a 23-year-old woman who has recently moved to Boston looking for a fresh start. After her abusive father’s funeral, she meets Ryle, a neurosurgeon, who she seems to instantly connect with. As their relationship unfolds, we see the love and trust that slowly forms between them but then, we see the cracks, we see the faults, and we see their seemingly perfect relationship turn into an abusive one. Instead of being a considerate, charming, loving person, Ryle becomes angry, uncaring, cold, and abusive.

In her prose, Hoover parallels Ryle and Lily’s relationship to the abusive relationship between Lily’s parents. She also juxtaposes these abusive relationships with one that is loving and healing. The book follows Lily’s teenage relationship with Atlas through her old journals where we see her recognize that not all relationships are like her parents. As she carries this lesson throughout her adult life, we see her grow and stand up for herself instead of constantly forgiving Ryle. Hoover portrays the struggles of being someone in an abusive relationship in a relatable and understandable way as the reader goes through Lily’s journey with her. As readers we also get attached to Ryle, so when we are shown the internal struggle that Lily has to go through to be able to pull herself out of her situation, we are able to understand and empathize with the same pain that she is because we, as readers, also feel betrayed by him.

Overall, I would give this book a 7.5/10. I am looking forward to “It Starts With Us,” the sequel to this book which is currently out for pre-order and will be released on October 18, 2022. It will follow Atlas’s side of the story and show us how his relationship with Lily starts and how it progresses. Atlas’ impact on Lily’s life is unquestionable, so I am excited to read what happened between them.

Me Before You – by Jojo Moyes

Sympathy can only go so far. The natural reaction to bad news is “I’m sorry and I understand what you’re going through, but don’t worry it’ll get better, just have hope”. But how do you approach and sympathize with a man who once had everything in the grasp of his hands – money, connections, a steady girlfriend – and now is reduced to living as a quadriplegic? It won’t “get better” and no amount of sympathy from gawking strangers will restore any hope he once had. Moreover, how does one begin to “understand” what one’s going through?

So here is Will – helpless, miserable, confined to this chair positioned at his window as he gazes outside into the world, unable to take part in it. But then imagine as you sit there desperate and depressed while having tubes shoved inside you, your mother hires Lou, an oddly dressed woman in colourful tights. Your mother has hired a friend for you! Lou promises you joy, happiness, and a return to your old life.

Lou, though not physically restrained, is also stationary in her life. She’s had the same boyfriend for 7 years, the same job for at least 3, and she’s lived in the same house for 26 years, her whole life. Now, she has been hired to work for this stubborn man out of obligation from her parents to become the main caretaker of the house. And as she begins to interact with Will, she realizes he pushes her out of her cushy life to explore and do things he will never get to do.

“Me Before You.” It is a story of sacrifice. Two people, leading two completely different lives, are pushed together in a seemingly uncomfortable and unpleasant situation. It’s a “forced proximity” love story waiting to happen. But it’s a story of sacrifice. It’s a “story of two people. Two people who shouldn’t have met, and who didn’t like each other very much when they did, but who found they were the only two people in the world who could possibly have understood each other.”