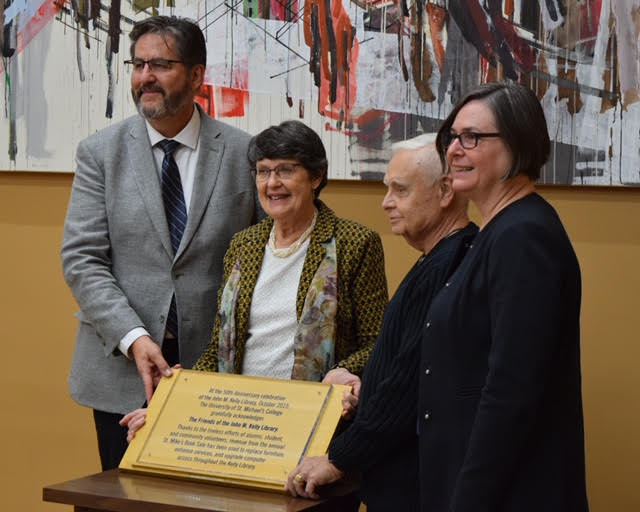 On Wednesday, October 23, the University of St. Michael’s College (USMC) hosted a celebration in honour of the 50th anniversary of the John M. Kelly Library. This was the last event of many in the 2019 celebrations in appreciation of Kelly Library. The event began in Father Madden with an introduction from USMC President David Sylvester. In his introduction, Sylvester spoke on Kelly’s extensive medieval collection and its new conservation studio.

At the event, a video was shown that exhibited this new conservation studio and addressed its significance. Notably in the video, Principal and Vice-President of USMC Randy Boyagoda discussed that the purpose of this new conservation studio is to “conserve these books, to preserve, to extend their lives into the future, so that future generations can join our students now in this great practice and tradition.”

In addition, Sylvester briefly touched on the significance of the annual USMC book sale and its importance to Kelly Library. Earlier this semester the book sale took place in mid-September, but as Sylvester mentioned, the first one in this long tradition took place in 2004. All of the money raised in these book sales goes directly toward helping support the Kelly Library.

Midway through the night, accomplished writer and alumni of USMC, Anthony De Sa took the stage. He read a few of his own personal reflections, mainly focusing on themes like his own family’s struggles in immigrating from Portugal to Canada. In one piece, De Sa spoke about his close relationship to his grandmother and told personal anecdotes about their adventures from when he was 11 years old. Audience members were then given the opportunity to ask questions following his stories. In response to a question from one member of the audience concerning his interior versus exterior life, De Sa responded that “books, to me, were saviours.”

The final speaker of the night was Sheril Hook, a Chief Librarian at Kelly Library. In her speech she thanked the current Kelly Library staff for their effort in working directly with students of USMC and the University of Toronto more generally. In addition, Hook thanked the special collection staff for “preserving memories unique to St. Mike’s college.” Other shout outs were given to the planning committee, Sylvester, and the donors who have helped support the library.

The end of the night was celebrated in Kelly Library Café. Hors d’oeuvres and drinks were available for guests. Notably the celebration included raffle prizes, such as exclusive Kelly Library 50th-anniversary water bottles, book bags, and signed copies of De Sa’s book. The night was then finished with a cake dedicated to the anniversary of Kelly Library.