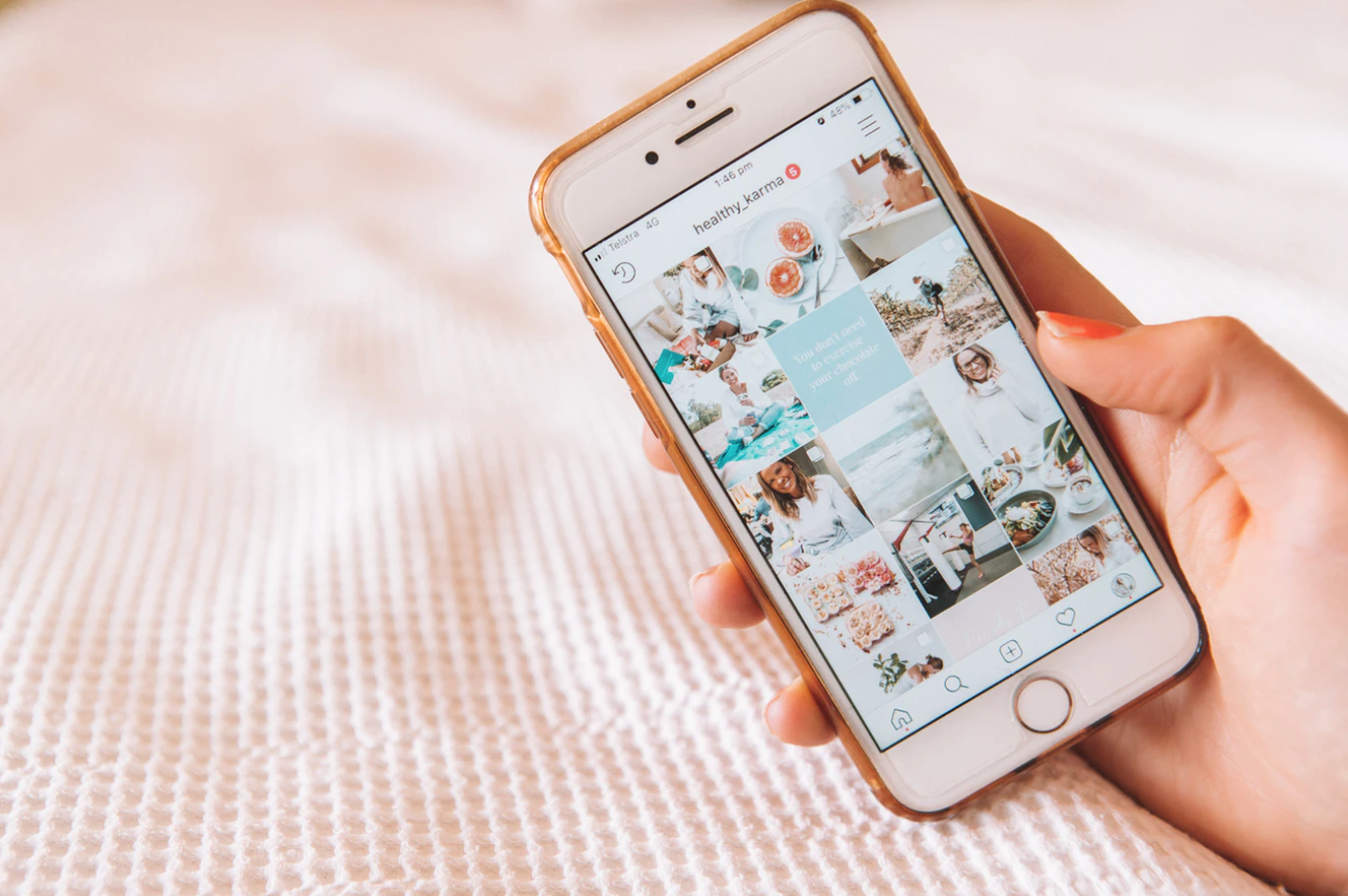 How influencers are affecting our individuality

With her artfully rumpled oversized hoodie and imperfectly perfect messy bun gathered into a haphazard knot on the top of her head, Emma Chamberlain could pass as any other 18-year-old. Except, of course, that she’s not. With nearly nine million followers on YouTube and eight million on Instagram, Chamberlain is part of the generation that is seeing a rise in the new kind of celebrity, and it’s the kind that’s more accessible and attainable than ever before. Termed “VSCO girl,” this kind of celebrity is famous on platforms such as Tik Tok or Instagram, and is famous because of her influence, rather than influential because she is famous. VSCO girls make their fans believe anyone can become a celebrity: Chamberlain has evolved from dollar-store hauls to front row at fashion week, and it gives fans hope, so what’s stopping someone else from doing the same?

While the stars of Hollywood remained gilded and golden in film glamour, they also remain distant — as people we admire from afar, speculating about their lives in tabloids and interviews because they feel untouchable. But influencers and YouTubers are stars that offer others a feeling of closeness and comfort on a platform that relies on connection and likeability to be successful. The illusion of direct communication with the people you’re watching makes it feels like they’re just like you, and their air of approachability only adds to that appeal.

Armed with her hydro flask, metal straw, and that blasé too-cool-to-care attitude, the VSCO girl archetype is becoming increasingly common online and Emma Chamberlain is simply the poster child. No one can deny the influence her platform wields and with it, her language, her behaviour, and her values are passed on to thousands of other viewers and consumers. Aptly named after the photo editing application VSCO, characteristics of the VSCO girl are a carefully crafted social media aesthetic complete with picturesque pastels and beachy smiles. This image of care-free living is curated over hundreds of pre-planned, edited photos that work together to present the same core common values and themes: plant-based lifestyles, loose beachy hair, velvet scrunchies, and outfits composed entirely from Brandy Melville or Urban Outfitters catalogues. This is simply the latest trend that’s swept across social media (picking up its fair share of ridicule along the way), but it’s one that accurately demonstrates how trends have moved beyond simply shaping views and have moved into shaping personalities. The VSCO girl is California’s greatest social media export, and as these trends ebb and flow, so do the personalities you see presented through social media platforms.

At 21, U of T student Sabrina Wu is what would be considered a micro-influencer in today’s digital world of advertising and influencer marketing—someone with a few thousand followers instead of a few hundred thousand. “It’s harder to keep my online and offline lives separate, especially because they’re both so heavily integrated with one another now,” admits Wu. “Both [my digital and offline worlds] seem to reinforce each other because it’s not uncommon to maintain relationships through an online presence and it’s also easier to feel that connection if I’m not in a social setting already.”

Wu doesn’t consider herself an influencer; she’s a full-time university student with a part-time job on top of her studies. She was approached by a brand to promote their swimwear in exchange for a royalty every time someone used her code to purchase that brand’s clothing. “It’s like being their ambassador, you have posts and stories, and it was more like if people use my code then I’d get paid a bit. It seemed easy; all I had to do was post as I usually would so I didn’t really think about saying no,” she says with a slight shrug — and in some ways, it’s easy to understand where she’s coming from. Influencer marketing has become so prevalent in today’s market that it’s odd not to see their branded posts pop up on your newsfeed. But when your feed is saturated with posts designed to create envy, how can you be happy with your own average-looking life?

“My relationship with social media is messy, it’s always changing. I use it to express and share parts of my life, but it’s also very removed from some of the things that I do.” Wu shifts, tapping her phone lightly as she speaks, “It’s something I go on when I’m bored and not usually for actual contribution to what I’m doing like school or work, but once I exit it’s a little like the bubble dissipates. I do think I act differently online, specifically on Instagram where there’s less direct communication because I’m more hyperaware that what I put forth is put on display for a much broader audience that’s not restricted to my personal circle or even just my followers.” It’s becoming more popular to see posts exposing the other side of perfected photos online and Wu nods when I bring them up. “It’s kind of a good thing, but even the photos that do that are edited, you know? It’s about controlling the level of reality you present to your audience because you still want to look good when you’re trying to make a point.”

Today, it feels as though using the internet and having a digital presence are no longer optional in our modern society, and even those that tend to stay away from social media profiles will find themselves caught up in their effects. As society enters a new age of digital interaction it can be easy to forget that a time existed before the internet, a time when the world didn’t exist at our fingertips and most importantly, a time when people’s lives weren’t told through carefully curated Instagram profiles.

Ideas of privacy and authenticity — both of which have always been tenets in society — have evolved to include what it means to have privacy and authenticity online. Our culture now reflects this evolution. Social media was often heralded as one of the greatest boons of Web 2.0 when it first launched; it was the beginning of a new, collaborative internet that promoted individuality and nixed antiquated ideas of censorship. People saw the rise of social networking platforms in earlier iterations such as MySpace which have now come to define what it means to have an online presence. Facebook only first launched 15 years ago though today it’s hard to remember a point before Facebook, which is already considered a more clunky counterpart to more modern applications such as Instagram and Snapchat.

With social media changing so rapidly in ways we’ve barely begun to know about, let alone understand, the rising trend of increased social media usage is disconcerting — especially when considering the consequences. In an ironic twist, despite what social media was originally intended for, now more than ever there is a shift away from individualistic expression and toward something more akin to a collective hive-mind. The fallacy of authentic living as depicted on social media is the biggest culprit.

Most influencers’ videos are filmed in bedrooms and other personal spaces, cameras focused on animated faces. It’s important for the fans to be present with them, and it feels as though there are fewer degrees of separation present due to the medium. The visibility of the passive viewer is heightened and applications like Instagram and Snapchat only afford fans even more insight into the day-to-day lives of their idols. With this new model of celebrity, influencers don’t feel like they exist in a different world; in fact, they seem (almost) just like us.

The quest for authenticity and relatability then becomes central to a YouTuber, but Emma Chamberlain’s love of iced coffee, adorkable quirkiness, and satire that seems to ridicule the very culture she finds herself entrenched in is no longer unique to just her channel. Neither is the style of her videos which are full of awkward pauses and moments where she speaks directly to the audience à-la-Fleabag — all of these are vehicles of authenticity that are now mimicked across the digital profiles of many famous YouTubers. Trends have shifted toward influencing personality, behaviour, and culture, and users of social media are all susceptible to them. When so many online profiles indicate similar interests and similar ways of dressing, talking, and living, can it really be considered a coincidence? Or is it indicative of social media’s insidious effects?

Social media is intended to showcase the individuality it allows its users. Instagram’s top profiles fit perfectly alongside each other, creating a mosaic of complementary images and aesthetics. Trends such as the VSCO girl signal the way we’ve begun to use our virtual lives to influence how we live offline, and while these changes are not always negative, there’s something to be said for the sense of blind attachment they breed. Conversations around cultural and social homogenization via mass media aren’t novel, but they are more important today than ever before. Fans emulate their idols in all sorts of ways, imitating these influencers through lifestyle, clothing, and even verbal choices.

The lack of digital literacy is rapidly escalating as levels of social media usage rise and the users grow younger. Born into worlds where social media is a constant, the threat of not being able to distinguish between what’s real and what isn’t creates cognitive dissonance between reality and artificially-crafted lives. More worryingly, this isn’t just a problem with younger generations — now even adults feel unable to separate their public and private lives. The line between public and private has blurred to the point that it’s virtually indistinguishable.

“I think it can be harder to keep things separate because there are different applications too — Instagram is a more curatorial and aesthetic medium whereas Snapchat is quicker and more about in-the-moment snapshots of your life as you live it which I consider to be relatively more authentic,” Wu says. “I’ve definitely found myself going to specific places and events with the intent of getting a good photo out of it. It’s like reviewing a restaurant on Yelp and sharing it with your followers. It’s like living this status of privilege because I got to do this thing or go somewhere that my followers may not have been or known about and then I’m the one putting it forward as unique or setting a new trend.” She pauses, then adds, “but seeing your posts later is like seeing exaggerated things about your personality. Like looking at yourself through a distorted mirror in a fun house,” says Wu. “It’s still you, though. Some aspects about me are more focused on, but it’s me.”

With a leg half-in and half-out, we are trying to navigate a new online sphere of living and it is a process that is still playing out before our eyes. It no longer pays to use social media; you need to understand its intricacies and learn to define your life your own way. Our lives have to move beyond our devices; a challenge, certainly, but we need to consider who we are authentically — without social media.