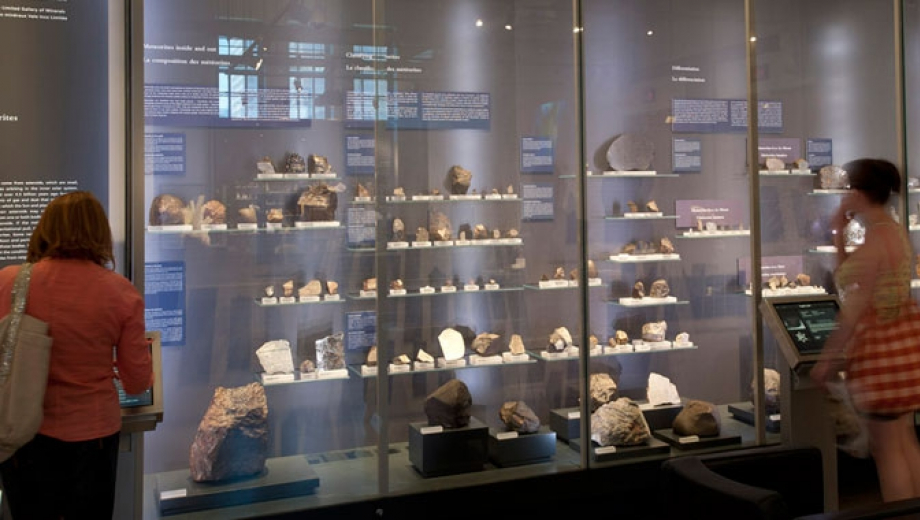 A first visit to the ROM

Having roamed around the brick-walled building in between lectures for months, I finally decided to step into the golden doors of the Royal Ontario Museum (ROM) with no expectations. The moment I stepped in I was in awe of the museum. Looking up to the beautiful dome-shaped roof, I saw stairs and halls guiding visitors to different paths.

My hunt for something intriguing in the museum started with walking up the stairs leading my way to the exhibit hall where dinosaur fossils were preserved. With no interest in dinosaurs, I walked out within a minute of entering the room. My attention was caught by the opposite exhibit. I could see stones shining almost like jewels, so I guided myself to the display where all the minerals were glimmering with glory.

For me, “minerals” are the fundamental ones I had learned in high school science classes: iron, aluminum, gold, etc., or precious gems. But as I walked into the exhibit, I was flabbergasted. The minerals were lustrous crystals — each being distinct from the other. Beautiful crystals like the quartz, neptunite, and many more captured my heart.

Each mineral shone with a vibrancy of its own. Seeing the array filled with gradients of colours, I realized that nature paints a canvas of its own. The shades of all minerals were distinctive and mesmerizing. For example, quartz itself had an abundance of gemstone types with colours ranging from rosy pink (rose quartz), smoky brown (smoky quartz), golden yellow (rutilated quartz), purple variety (amethyst), and so many more. Similarly, halides covered the colour spectrum of the bright blues, greys, and whites with a touch of black.

Minerals are small stones that beam their beauty because they are unique. These crystals embrace the way nature shaped them. The charm of minerals is surely in the way they are formed — some under pressure, while some through collision or friction — but also in the way they represent their characteristics. A fluorite is as exquisite as a calomel (both in the halides family), and a rhodochrosite is as fascinating as a calcite (from the carbonate family). I know I lost you with those names. That’s when you know you have something you need to explore.

We know minerals are solid substances that occur naturally. They are inorganic and lustrous. Each mineral has a variant texture to it; some are glassy, metallic, brilliant, or dull. As I walked through the exhibit, I thought of how each mineral has a property of its own and a chemical combination supporting their formation. For example, I knew diamonds are formed under high temperatures and pressures at the depth of approximately 150–200 km below the Earth’s surface. I learned that rose quartz forms during a cooling process, wherein titanium combines with silicon and oxygen to produce rose-colored quartz. This is an example of the artistic mingling of elements to create stones, worthy of having a look at.

Also, I discovered ROM is a great place to spend some of your idle time on Tuesday when it is free for University of Toronto students. I hope you wear your exploration cap and discover a new exhibit on your trip to the ROM, just like I’ve discovered a newfound love for minerals!