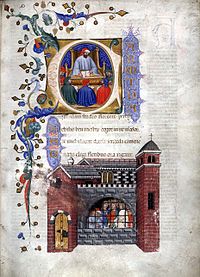 The surprisingly orthodox and virtuous fruits of Christian faith as they pertain to “fortune.”

For weeks now, a particularly philosophically minded friend of mine has been reiterating a thought that he picked up from his recreational reading. It is this idea that because the world is under God’s ultimate and complete jurisdiction, it is absolutely and in every sense exactly as it should be.

This is a notion that I, reacting viscerally, immediately denied. How could this fallen world be both perfect and in the near-hopeless state I see it in today? As it turns out, I had initially misunderstood exactly what he was trying to say. Only in class, as my professor was explaining Boethius’The Consolation of Philosophy, did I finally realize what my friend was saying. Moreover, I realized that this is an orthodox and ancient Christian concept.

My friend was not trying to argue that sin is good or that evil should be accepted. He was arguing that things exist and happen, from now until forever, in the way they should; that is, the way that gives most Glory to God. Original sin, felix culpa (the happy fault), as theorized in medieval thought, was not a thing to mourn, for without it there would have been no need for Christ, nor for His Incarnation, nor for the Glory of His Saving Action. This same thought is behind the use of “Good Friday” to refer to the day that Christ suffered and died: it is a good day because without it, there would be no salvation for mankind. The Christian, in the imitation of Christ, must think of his own suffering in the same sense.

From its very beginnings, the sensus fidelium was a radically different notion of fortune and how one ought to handle it in both of its extremes. Like everything else, Christian thinkers tackled this problem over a thousand years ago. In 524, Boethius wrote a self-help book about this exact issue, The Consolation, while he was awaiting his own unjust execution. Death, as he explains through the character of Lady Philosophy, is the only thing that anyone can be sure of in this life. Fortune turns like a wheel, either in our favour, or against it.

This is not to say that there is no merit in pursuing a more virtuous society in this life, nor is it a call to passivity regarding injustices perpetrated by oneself or others. It is, however, a call to ultimate passivity to whatever fortune befalls your own person. Beyond that, true holiness as embodied in Christ shows not just passivity, but passion toward the Will of God. It is, at its core, obedience and humility to the Divine Omnipotence.

It is a radical and deeply unpopular notion that all events are ultimately for the greater good; it includes those things so evil and so incomprehensible that we would rather do anything than to have them befall us. This is a universal reaction, but true obedience demands absolute trust in the goodness of God to the abandonment of our own notions of what may be good or bad fortune. It is obvious that this is not an easy concept to accept for a culture that holds the attainment of the individual will (in the exterior world) to be the highest good. This has always been the foremost barrier to the attainment of true interior peace, and it will be for as long as we exist. Our age is unique in this matter because it has never been more deeply ingrained in a culture.

In maintaining virtue through the faithful endurance of both the good and bad fortunes of one’s life, the soul is purified in the exact way that God intends it. Happiness is not contrived from the exterior world, which is as unreliable as fortune’s wheel. It is only attained when looking interiorly, understanding that all fortune is good fortune, and surrendering all to the perfect Will of Him who allows both good and evil to befall you. This is a beautiful paradox of the Faith: that only in surrender, including the surrender of one’s own will, is true freedom attained. Fortune’s wheel will turn, but we can have a peace that is unbreakable by any misfortune and incomprehensible without Christ.