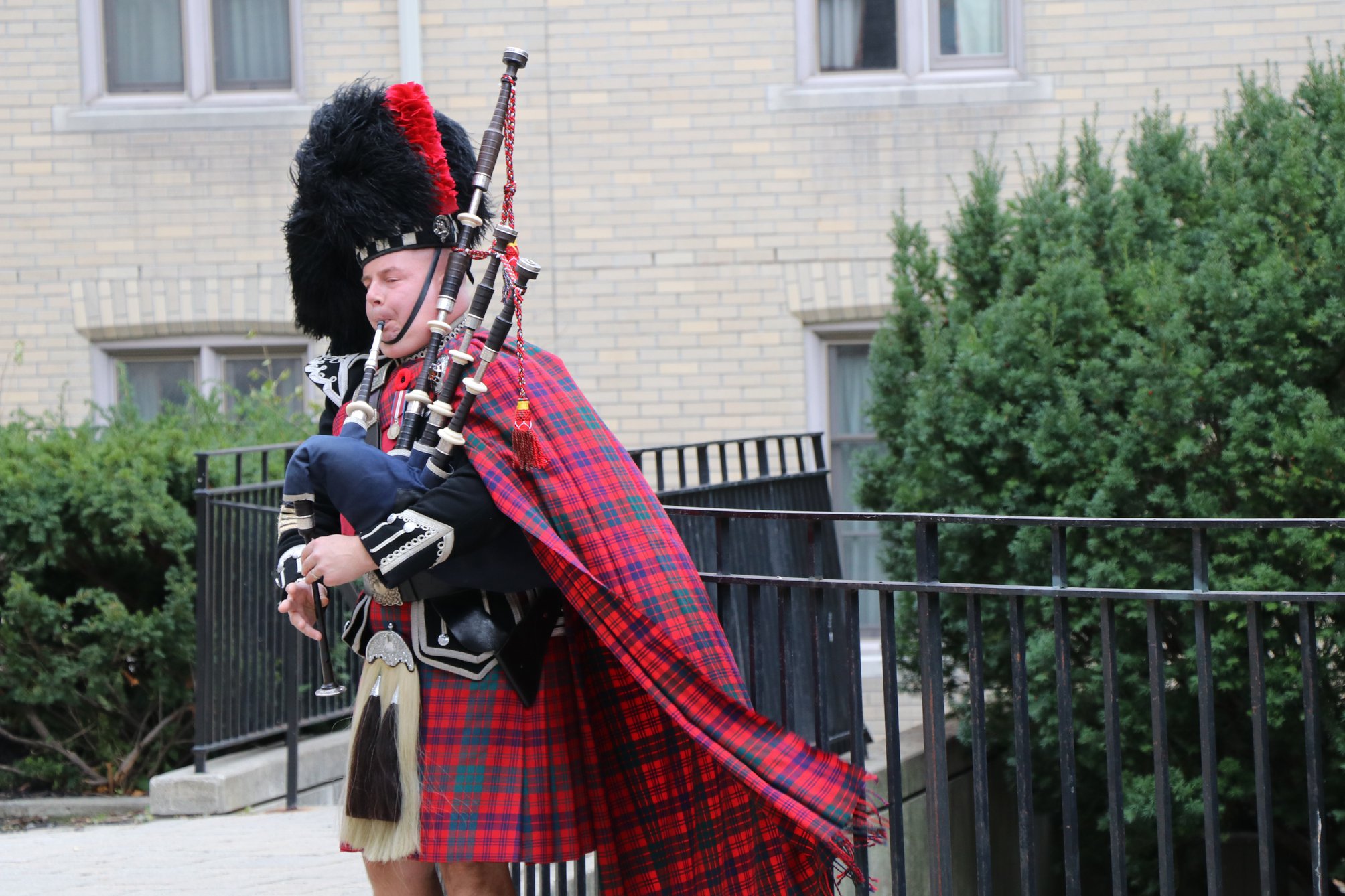 A detoured tour of the St. Mike’s Faculty of Theology Convocation, with its speeches and some reflections

It’s good to stop by St. Basil’s every now and then, even when there is nothing particularly noticeable going on. In fact, a nice quiet time at our collegiate parish may, more often than not, be what is sought from end-of-term crunched schedules and ever-decreasing temperatures. However, on Saturday, November 9, 2019, at 2:00 p.m. and in the preceding minutes, I think everyone noticed the bagpipes blowing the tunes that were, though expected, not expected for another two days — on Remembrance Day. It is by stopping by St. Basil’s that, though hearing a familiar tune, you can actually see with your eyes, and with whatever part of ourselves sees history, the figures and traditions which constitute the past — and, apparently, the present — of our College.

The occasion, as I learned from a gold-tinged pamphlet upon entering the church, was the Convocation for the Faculty of Theology and the Continuing Education Division at our very own University of St. Michael’s College. Present were many names and faces, familiar and unfamiliar, but I did not worry too much, because the pamphlet knew better what was going on than I. The sanctuary lamp was put out temporarily, the organ at full strength. And, vaulted forward slowly by the hymn “For the Beauty of the Earth,” in came the “Chancellor’s Party,” distinguished on paper by varying degrees of credentials; from doctorates, to religious orders, to priestly ordination — or all three. Finally, the party leader himself, with a singularly distinguished credential: a “D.D.” (which Wikipedia labels Doctor Divinitatis , or “Doctor of Divinity,” claimed to be “an honorary degree denoting ordination as bishop” in the Catholic Church). Indeed, the Chancellor of our College is not only bishop but archbishop, and not only archbishop but His Eminence Thomas Cardinal Collins.

Though the University of Toronto is very much a modern university, I’d heard that the structure of the Catholic Church was the model for the very first universities in medieval Europe; a fact to which the convocation’s litanies of official Latin proclamations and titles soon testified. But to learn anything further about the university, modern or medieval, I could do little more than contemplate the ceremony and hope to meet all the presidents, directors, and principals who, coming from such varied institutions as our own Faculty of Theology, the Toronto School of Theology, the Pontifical Institute of Mediaeval Studies, and the highest circles of the University of Toronto administration, seemed to represent all those missing and misunderstood pieces from that first medieval university — in Bologna, or Paris, or Oxford, or Salamanca — until now. The medievalists could have helped with the Latin, too.

The roots of the modern university, even in a Faculty of Catholic Theology, show the fruits of unexpected encounters with the passing pages of history. Before the opening prayer from the Chancellor and Prince of the Church, a summons was made for an Indigenous person to read a land acknowledgement; subsequently, the Chancellor invoked the Holy Spirit, Veni Sancte Spiritus, that He might fill the hearts of the faithful, kindle in them the fire of His love, and renew the face of the earth: et renovabis faciem terrae. Then followed the beautiful invocations to the other Persons of the Holy Trinity and for the intercession of the Seat of Wisdom, Saint Michael, and Saint Thomas, after which the presentation of the candidates began.

What a wide range of people St. Michael’s College is capable of welcoming, challenging, and certifying in theological study! Our many programs allow for a breadth of research and interest, from the recently founded Sheptytsky Institute of Eastern Christian Studies, to encapsulated business-oriented courses across the country, to research that scrutinizes a couple lines in the Book of Numbers.

A first address from Claire M.C. Kennedy, Chair of the Governing Council of the University of Toronto, was sweet, succinct, and structured. Secular society’s struggle with ungracefulness was meditated upon in conjunction with the supernatural grace believed, studied, and lived in theology: the logos of God.

Two honorary doctorates were awarded that afternoon, the first of which belonged to Catherine B. Shannon, who gave the Convocation Address. Shannon is a specialist in Irish history and has played an active role remedying religious conflict in Ireland, in addition to her work facilitating the lives of immigrants to North America, immigrants like her own Irish antecedents. Shannon’s warm Bostonian accent recalled to us her own undergraduate days at St. Mike’s (class of 1960), her time in St. Basil’s pleading to God about the next midterm, and the sounds from the now-squashed soccer field. She was also a goalie for the St. Mike’s hockey team. She applauded the work of the Celtic Studies program at St. Mike’s, and recounted how mutually blessed St. Mike’s and the Irish community of Toronto were to have built together the legacy of a Catholic university. Funnily enough, and once more in the presence of Cardinal Collins, Shannon spoke to us of Saint John Henry Newman, mentioned in Issue Three, and specifically of The Idea of a University, inspired by Newman’s own job as the rector of the first Catholic University of Ireland in 1854. St. Michael’s was founded in 1852, St. Basil’s in 1856, and Fr. Brennan was the first pastor to some of those early Irish boys, boys not so different from the ones we remembered on November 11, who fought for Canada. Does “Brennan” sound familiar?

I don’t know if Fr. Brennan cares that much whether you know his name, or even whether his boys were Irish. Most names and people pass like dust, though millions die for them. There is only One People who never die, though, and One Name “which is above every name” (Phil. 2:9). That Name, with Fr. Brennan’s and many others, resides today in St. Basil’s Church.

The Chancellor concluded in prayer by invoking the protection of St. Michael the Archangel — in Latin, naturally — and we sang the national anthem, in both English and French. Convocatio dimissa est, and a reception to be followed immediately in Fr. Madden Hall.