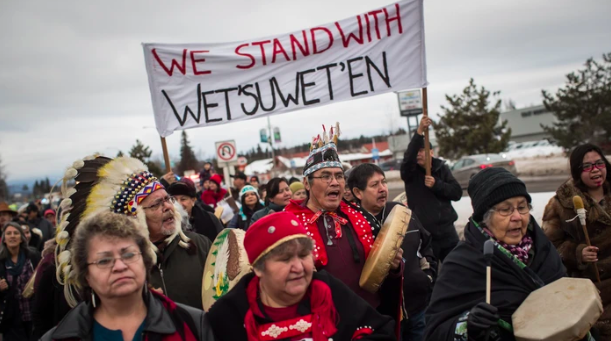 On January 1, 2020, Wet’suwet’en Hereditary Chiefs issued a notice of eviction to the Coastal GasLink and Canadian government. Both parties were planning on constructing a pipeline on traditional Wet’suwet’en territory. Despite the notice of eviction, about a month later, Royal Canadian Mounted Police (RCMP) raided the territory on February 6. This five-day raid included the removal and arrest of nearly 30 land defenders, as well as brought about a court injunction which would allow for the construction of the GasLink pipeline to resume.

Since the RCMP raid, solidarity actions throughout the rest of Canada have taken place with many rallying behind the Wet’suwet’en land defenders in northwestern British Columbia (B.C). There have been rail blockades in Belleville, Ontario, blockades between Aldershot and West Harbour GO stations, ongoing blockades on Highway 6, as well as numerous others across Canada.

These solidarity actions come as a result of a decade-long struggle the Wet’suwet’en have been in against this proposed Coastal GasLink pipeline which would run through their territory.

In taking these issues closer to home, the University of Toronto’s (U of T) Department of Geography & Planning has recently put out a petition addressing its support with Wet’suwet’en land defenders.

The Department of Geography & Planning’s petition states that the Department stands “in solidarity with members of the Wet’suwet’en Nation as they peacefully defend their unceded territories, in the face of militarized police action, raids, and arrests by armed RCMP officers.”

“We express our support as geographers and planners, who understand our roles as educators, researchers, and organizers to have specific responsibilities to Indigenous peoples’ efforts to protect their lands, waters, and peoples,” the petition further states.

The petition also condemns the actions taken by the Canadian government and urges both federal and provincial governments to adhere to the demands of the Wet’suwet’en  Hereditary Chiefs.

The petition further affirms concern stating, “We are concerned with the use of militarized police force and the arrests of Wet’suwet’en land protectors, including the recent arrests of Unist’ot’en matriarchs as they held a ceremony honouring their missing and murdered Indigenous sisters.”

As of February 21, the Departments of Social Justice Education (SJE) and Curriculum, Teaching, and Learning (CTL) at the Ontario Institute for Studies in Education (OISE) at U of T have also expressed their support. Their open statement of support reads, “We commend the courage and vision of Unist’ot’en Camp and are in solidarity with land defenders and the collective hereditary governance of the Wet’suwet’en who are enforcing Wet’suwet’en laws on their unceded lands.”

The SJE statement further reads, “We denounce the governments of British Columbia and Canada, the Royal Canadian Mounted Police, as well as the Coastal GasLink Pipeline for their violent interference with the rights of the Unist’ot’en to occupy, manage, and maintain their unceded lands.”

According to a report by The Varsity, U of T has responded to these petitions stating that, “We support the ability of our faculty members to engage in issues that they feel strongly about.”

Moving forward, on March 1, the Wet’suwet’en Hereditary Chiefs reached a tentative agreement with B.C. federal officers. But, as according to the National Observer, this agreement “doesn’t address the Coastal GasLink pipeline directly, nor does it mean Wet’suwet’en solidarity blockades will end anytime soon.”

In conjunction to this, on March 4, over 150 U of T students and activists shut down a portion of St. George Street as part of a national student walkout in solidarity with Wet’suwet’en land defenders.

The walkout at U of T, which blocked off Harbord Street to Wilcocks Street, was organized by Leap U of T, Climate Justice Toronto, and the Ontario Public Interest Research Group. Students across Canada too participated in a national walkout as a means of defense and solidarity.

While this pipeline issue is still ongoing it seems as though there is much more that needs to be done, especially in regards to holding the Canadian government accountable in its actions and inactions regarding land rights.